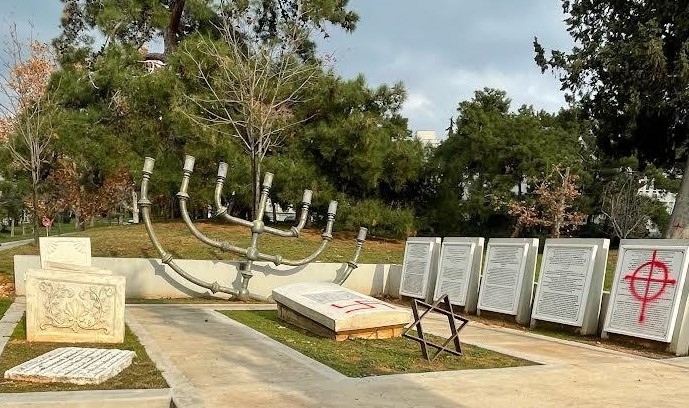 The vandalized Holocaust memorial at Aristotle University in Thessaloniki, Greece, Dec. 27, 2022. (Central Board of Jewish Communities in Greece.)
Advertisement

(JTA) — For at least the fourth time since it was installed in 2014, vandals desecrated a Holocaust memorial in Thessaloniki, the Greek city that once boasted a Jewish plurality.

A photo appearing Thursday on the Central Board of Jewish Communities in Greece website showed a red swastika daubed on a grave that symbolizes the tombstones destroyed by the Nazis after they deported more than 90% of Thessaloniki’s population to death camps.

Additionally, a red Celtic Cross, a white supremacist symbol, defiled one of five historical markers lining the site at Aristotle University, on ground where the cemetery once was.

“We condemn the unholy act of the vandals, followers of intolerance and antisemitism that express their hatred and fanaticism through the profanation of the memory of the Salonican Jews,” the news site quoted the city’s Jewish community as saying in a statement. “No tolerance to antisemitism!”

The statement called on law enforcement to track down and bring the vandals to justice. It was not clear from the statement when the vandalism occurred.

The monument, installed in 2014, features a metal menorah and a star of David positioned slightly askew to symbolize the destruction of the ancient community. It was previously vandalized in 2018 twice and once in 2019.

Before the Holocaust, Thessaloniki was one of the most Jewish cities in Europe with a Jewish majority or plurality for much of the 19th century. The city’s Jewish community was primarily Sephardic, though it also included a small community of Romaniotes, Judeo-Greek speakers from Greece and Turkey who predated the Sephardic migration to the area after their expulsions from Spain in 1492.

During the spring and summer months of 1943, almost all of Thessaloniki’s Jews were deported to Auschwitz, where most perished.