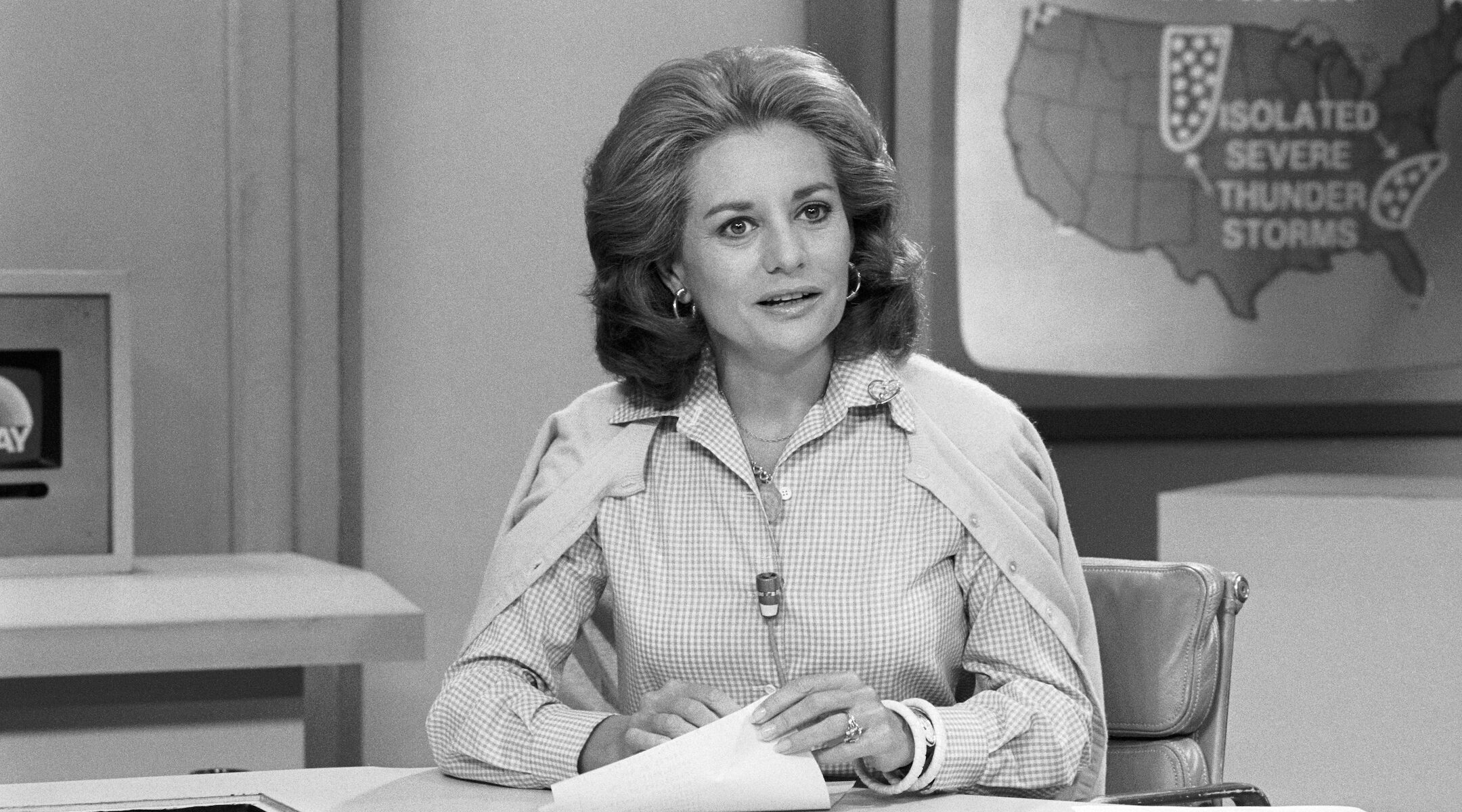 Barbara Walters on the set of "The Today Show" in 1976. (Bettmann/Getty Images)
Advertisement

(JTA) — Barbara Walters, the iconic newswoman and celebrity interviewer who made history for women and Jewish anchors on mainstream American news television, died at 93 on Friday.

ABC News, where Walters regularly appeared on shows such as “20/20” and “The View,” shared the news without giving a cause of death.

Before becoming one of the most enduring and talked about news hosts in the world from the 1970s through the 2000s, Walters was raised by parents descended from Jewish immigrants who fled antisemitism in Eastern Europe. Her father Lou founded a chain of nightclubs and moved the family from Boston to Miami to New York, earning and losing fortunes along the way.

In 2006, Walters told The Washington Post that her parents were not religious, and she never celebrated Jewish holidays while growing up. But she noted that her father would always come home from his Latin Quarter clubs on Friday nights, which she saw as a nod to a family Shabbat tradition. As an adult, she began buying Christmas trees each year, proclaiming she loved the holiday.

Walters was married four times, to three different Jewish men. She had one child, with theater impresario Lee Guber, who demanded that their daughter attend Hebrew school. While married to producer Merv Adelson — from 1981-84 and then from 1986-92 — they celebrated Jewish holidays “because it was important to him,” she told the Post.

Walters worked her way up through the ranks at NBC in the early 1970s, becoming the first female co-host of “The Today Show” in 1974. In 1976, she moved to co-host what was then the “ABC Evening News.” She became a longtime contributor to “20/20,” ABC’s primetime TV news magazine show that competed with CBS’ “60 Minutes,” and co-founded and co-hosted “The View,” starting in 1997.

Walters was known for her candid interviewing style — “She invented intimacy on television,” an ABC producer once said — but also hit her subjects with blunt, cutting questions. Some of her most famous interviews included Jewish figures, including Monica Lewinsky, who Walters called her biggest “get.” She asked Lewinsky if she would tell any future children about her affair with President Bill Clinton, which rattled Washington in a way few other scandals have.

“And that,” Walters said in an often-quoted response, “is the understatement of the year.”

Walters also scored the first joint interview with Egyptian President Anwar Sadat and Israeli Prime Minister Menachem Begin, before they finished negotiating a historic peace agreement in 1979. In 1977, she had also interviewed Sadat on his flight to meet with Begin in Israel.

Her style was often debated, including by some critics who thought she ushered in the era of news as entertainment, and parodied by the likes of Gilda Radner on “Saturday Night Live.” In 2014, she appeared on “SNL,” proclaiming that it was an honor “to see my groundbreaking career in journalism be reduced to a cartoon character with a ridiculous voice.”