A new mural in Nolita celebrates a Holocaust rescuer 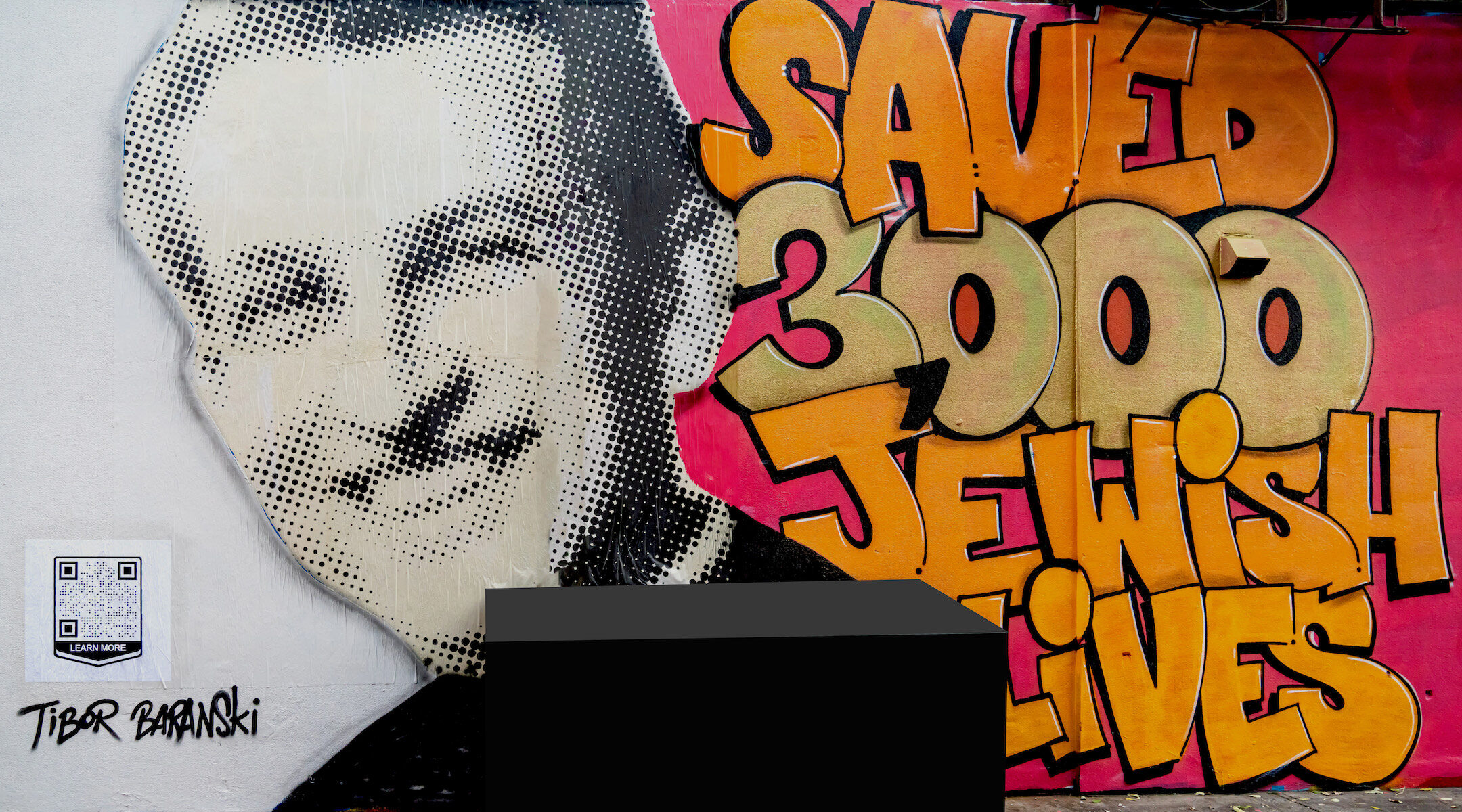 The mural of Tibor Baranski, who saved more than 3,000 Jews during the Holocaust, is on the corner of Spring St. and Elizabeth St. in Nolita. (Courtesy Fernando "SKI" Romero)
Advertisement

(New York Jewish Week) — In the heavily trafficked neighborhood of Nolita, a larger-than-life mural has popped up on the corner of Spring St. and Elizabeth St. Bright orange and pink paint spell out the words “Saved 3,000 Jewish Lives” next to a black and white portrait of Holocaust rescuer Tibor Baranski.

The mural, an art piece designed to combat hate and spark conversation, is the brainchild of “Artists 4 Israel,” a non-profit organization that aims to “prevent the spread of antisemitic and anti-Israel bigotry by helping to heal communities that have been affected by hate through art,” according to its CEO and co-founder Craig Dershowitz.

“Our rallying cry is art over hate,” Dershowitz said. Baranski’s portrait, painted by Fernando “SKI” Romero, a renowned graffiti artist based in Queens, is part of the organization’s “Righteous Among the Nations Global Mural Project.” It aims to establish a network of murals painted in cities around the world that feature other “Righteous Among the Nations” members who helped save Jews during the Holocaust.

“His story was beautiful and it really touched me,” Romero, who is Dominican, said of Baranski, who collaborated with Artists 4 Israel on deciding whom to feature in the New York mural. “The want to paint something came very easily with something so selfless.”

The Baranski mural in Nolita is the third installment of the mural project; eventually there will be 10 murals around the world, said Dershowitz. Each subject is given a mural in their home state or country where they aided Jews: In Portugal, a mural of Aristides de Sousa Mendes, a diplomat who helped arrange passports for Jews has become a popular tour bus stop. In Greece, a mural of Mayor Loukas Karrer and Archbishop Dimitrios Chrysostomos led to national media coverage.

Though Baranski was Hungarian, he lived in Buffalo, New York for nearly six decades and felt at home in New York, which is why the Artists 4 Israel chose him for the mural in Manhattan.

In 1944, Baranski was 22 and studying to become a Catholic priest in Slovakia when the Russian Army invaded and he was forced to return to Budapest, where he grew up.

He never returned to the seminary, and abandoned his dream of becoming a priest. Instead, he dedicated the next years of his life to orchestrating the escape of more than 3,000 Hungarian Jews from the Holocaust.

After arriving in Budapest, Baranski headed to the Vatican embassy residence of the Papal Nuncio Angelo Rotta, where a long line of people were requesting help. The Vatican embassies in Switzerland, Sweden, Spain and Portugal were some of the only places where Jews and other refugees were able to secure letters of protection and necessary documents to leave their countries. 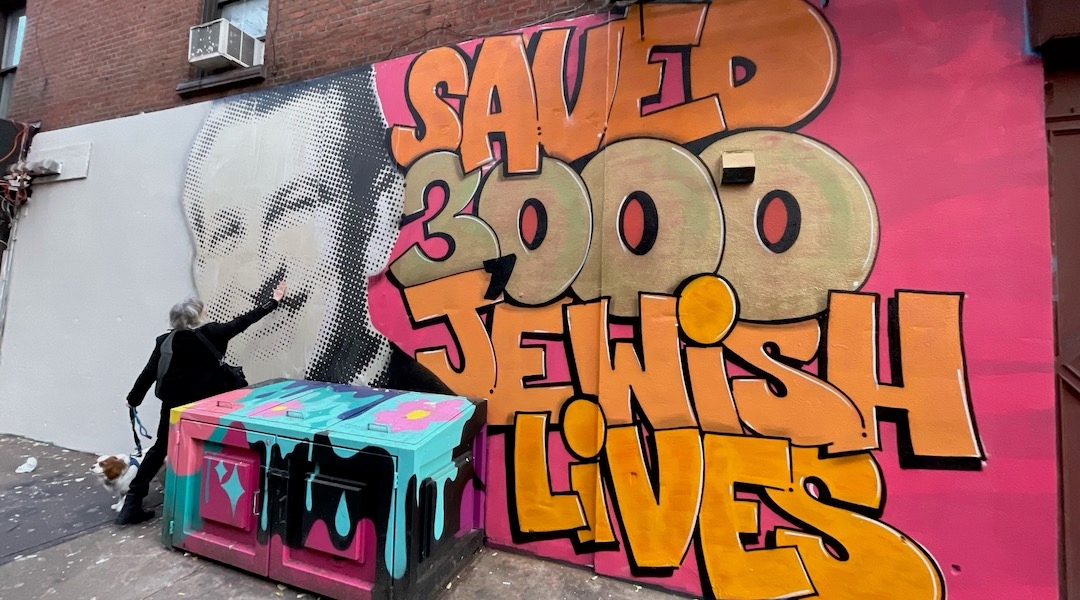 Carol Romeo, who said her family survived the Holocaust, pauses to touch the mural of Holocaust rescuer Tibor Baranski created by Fernando “SKI” Romero, a Dominican-American artist born and raised in Queens. “I never knew he existed,” she said of Baranski. “And he lived here in New York. Everyone should know his story.” (CAM and Artists4Israel)

Pretending to be a priest, Baranski managed to arrange a meeting with Rotta, where he secured documents for a Jewish family he knew. As the story goes, Rotta soon recruited Baranski to help organize protection letters, baptismal certificates and immigration certificates for Jews trying to escape Hungary. He also helped coordinate food and housing for the escapees. Over the next two months, Baranski saved 3,000 Jewish lives, according to official records — though his sons have said he believes the number was closer to 15,000.

After the war, Baranski was imprisoned by the Soviet army for five years for his anti-communist beliefs. He became a freedom fighter during the Hungarian Revolution of 1956 before moving to Rome to start a refugee camp with his wife Katalin.

Eventually the couple moved to Canada and then settled in Buffalo, where they were active members of the community and raised their three children, Tibor Jr., Kati and Peter.

Baranski, who died in 2019, was recognized by Yad Vashem as a Righteous Among the Nations in 1979, and was appointed by President Jimmy Carter to the U.S. Holocaust Memorial Council.

In an obituary in the New York Jewish Week, writer and close friend of Baranski’s Steve Lipman recalls an anecdote Baranski often repeated: “’Why do you, a Christian, help Jews?’ Uncle Tibor told me the Nazis asked him. ‘You are either silly or an idiot,’ he would answer. ‘It is because I am a Christian that I help the Jews.’”

For Dershowitz, who is based in Los Angeles, one of the goals of the murals — and his organization at large — is fighting antisemitism through education about Israel and the Holocaust. By making the art public and accessible, Dershowitz hopes people of all backgrounds will enjoy the art, and learn from it.

“These murals are very much for everyone to enjoy,” he said. “For the most part, they’re not geared towards the Jewish community as much as they’re geared towards a younger demographic, regardless of their religion or cultural heritage.”

Since its foundation in 2009, Artists 4 Israel’s principal mission has been to bring diverse groups of graffiti, street and mural artists to Israel to create projects that “benefit people in a direct, on-the-ground way,” such as painting murals in hospitals, bomb shelters and army bases. The organization has worked with more than 5,000 professional and amateur artists from 32 countries around the world, according to its website.

“When [the artists] come back [from Israel], they’re able to talk about the country and they’re able to speak about the Jewish people and be a window into the reality of Israel in the Middle East to their millions of followers,” Dershowitz explained.

In 2020, when COVID-19 arrived and international travel halted, the organization switched gears and started bringing their advocacy to cities around the world with the “Righteous Among the Nations” project.

For the artist Romero, the work has been especially gratifying. The 44 year-old artist has been involved with Artists 4 Israel since its inception and has visited Israel three times, painting murals for battered women’s shelters, community shelters and army bases.

“I’m creating art with purpose, which is beautiful. I’m also creating a dialogue. There’s a conversation,” Romero said. “This is one of those murals that touches home and it makes you really feel good. It is art that just separates itself from a lot of the noise out there.”

Painted over the course of two days, the mural will remain on the downtown corner for the next nine months.

At the unveiling party last month, which included a performance by singer Neshama Carlebach and blessings led by Rabbi Menachem Creditor, Baranski’s son Tibor Jr. retold his father’s story and emphasized the strong Catholic faith that guided him.

“Tibor Baranski was the merger of intellect and faith,” said his son, who drove from Buffalo for the event. “My father’s deeply held belief in God was uncompromising. It was the core driver in his saving thousands of innocent Jewish lives in 1944 in Nazi-occupied Hungary.”

“I will quote my father since his words captured the essence of our Catholic faith and what this mural that Fernando painted commemorating him represents: ‘Love each other, love each other sincerely. God is love. Love destroys hatred,’” he added.