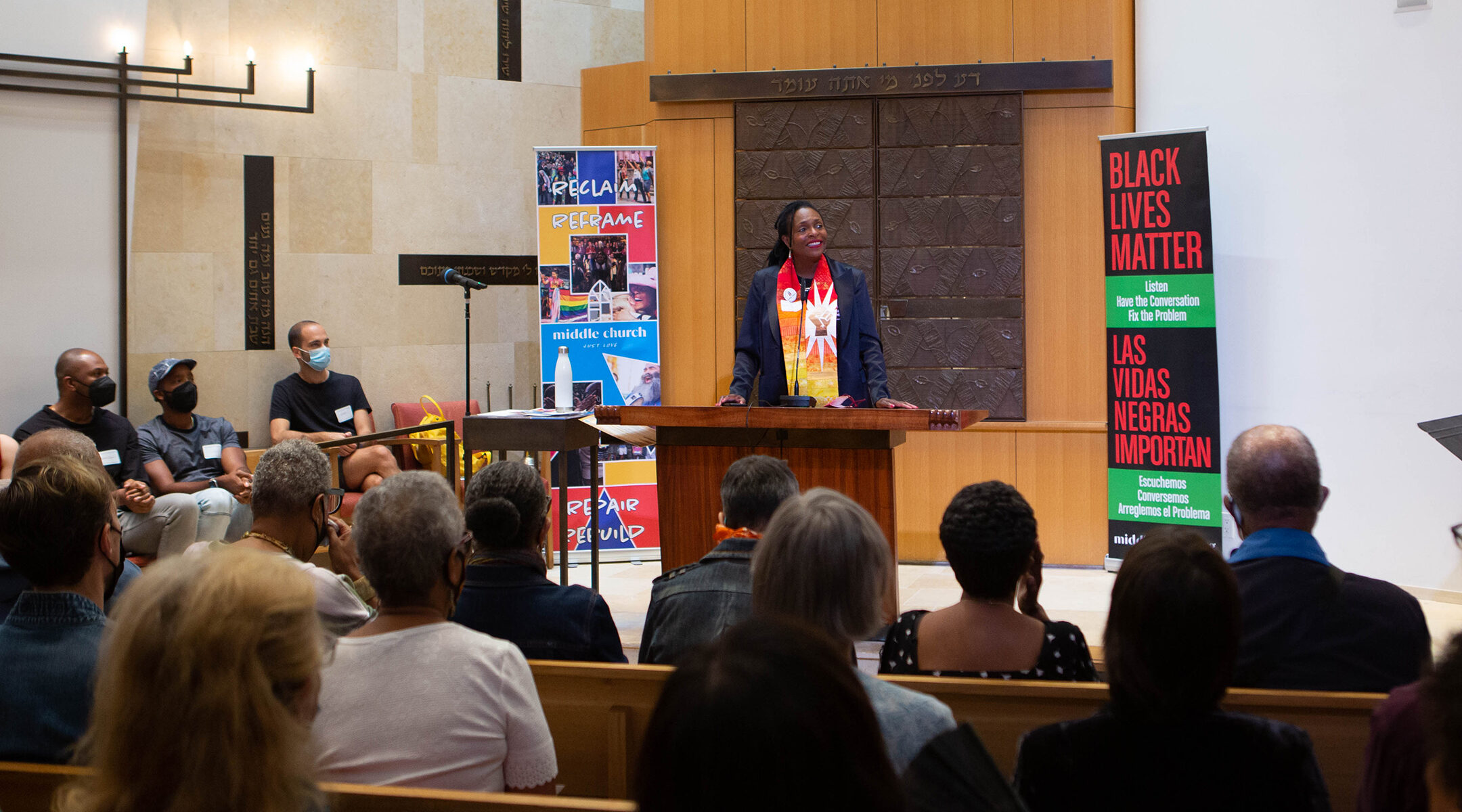 (New York Jewish Week) — When a fire devastated the Middle Collegiate Church in the East Village two years ago, East End Temple, a nearby Reform synagogue, welcomed church-goers to worship in their sanctuary.

Since then, a relationship has blossomed between the synagogue and the church, which has remained homeless due to the six-alarm fire that  destroyed most of the historic building in 2020.

But this weekend, when the congregations get together for a planned Martin Luther King Jr. Teach-In this Sunday, they’ll have something additional to celebrate: The NYC Landmarks Preservation Commission cleared the way for the church to build a new home.

Rev. Dr. Jacqui Lewis of Middle Church said on Wednesday that the Landmarks Commission voted to allow the church to remove the burnt remains of its facade, allowing the congregation to rebuild.

According to Lewis, East End’s Rabbi Josh Stanton was one of the first people who reached out to her after the fire, which started next door. The synagogue has since supported the church in its efforts to win approval for its renovation so that it can return home.

“Truly, God is good,” Lewis wrote on Twitter. “Out of this fire, fierce love is rising.”

Yesterday, the NYC Landmarks Commission voted to let us remove the destroyed remnants of our facade, so we can build a new home.

As Christian fascism rises, the world needs churches like Middle. As unapologetically antiracist, prochoice, and queer as God. pic.twitter.com/EChCv6qqCx

“I am relieved by the decision and elated that Middle Collegiate Church will be able to rebuild,” Stanton said. “Buildings are meant to serve human needs and higher purposes — and the new church building will do so in transformational ways.”

He told the New York Jewish Week that the relationship between the two congregations builds upon King’s legacy. “We view each other as kindred spirits as opposed to feeling a sense of animus,” Stanton said, adding that some 300 people from both congregations are planning to attend Sunday’s teach-in, which is about strengthening the bond between black and Jewish communities.

“We are, as a Jewish community, going to church with our wonderful friends and colleagues at the leading multicultural church in New York City,” Stanton said.

He added that the church will continue to use the synagogue sanctuary for the ‘foreseeable future,’ unless it should outgrow the space.”

In a time of rising antisemitism, he added, this type of joint learning is “essential work,” he added. “This is one of those opportune moments, probably the most opportune since the Civil Rights era, for Black folks, Jewish folks, and Black and Jewish folks, to work together in a concerted way.” Last year, a number of African-American celebrities — notably the rapper Kanye West and the New York Nets star Kyrie Irving — were criticized for sharing antisemitic tropes with their millions of social media followers, stoking tensions between the Black and Jewish communities.

Both Lewis, Stanton and others will speak at the King event. After church services, the community will break bread, take part in community organizing work and learn more about their shared history.

Middle Church has served the East Village community since 1892. Before the fire, it was a community hub for other social programs — some run by other synagogues — including soup kitchens and Alcoholics Anonymous meetings. It has also played a role in supporting people during the AIDS crisis, helping people pay rent during Covid and more recently, supporting Ukraine in its war with Russia.

Since Easter of 2021, the church has prayed at the synagogue’s sanctuary on East 17th Street every Sunday.

It’s not all bleak out there.

I went to church last Sunday, where East End Temple, a Jewish synagogue in the East Village, has been hosting @middlechurch for almost two years after a fire destroyed their historic building. pic.twitter.com/0FjtlXr7TA

The Temple covered upwards of 95% of the cost for the church to rent the space.

“Josh was offering me a tabernacle,” Lewis told the New York Jewish Week last month. “This big-hearted rabbi opens the door to a church, in a time of rising antisemitism, that’s just bold, fierce love at work.”

“We are forever in your debt,” Lewis wrote.

The MLK event is taking place this Sunday, Jan. 15 at East End Temple in the East Village. The church is also accepting donations to support its rebuilding efforts.