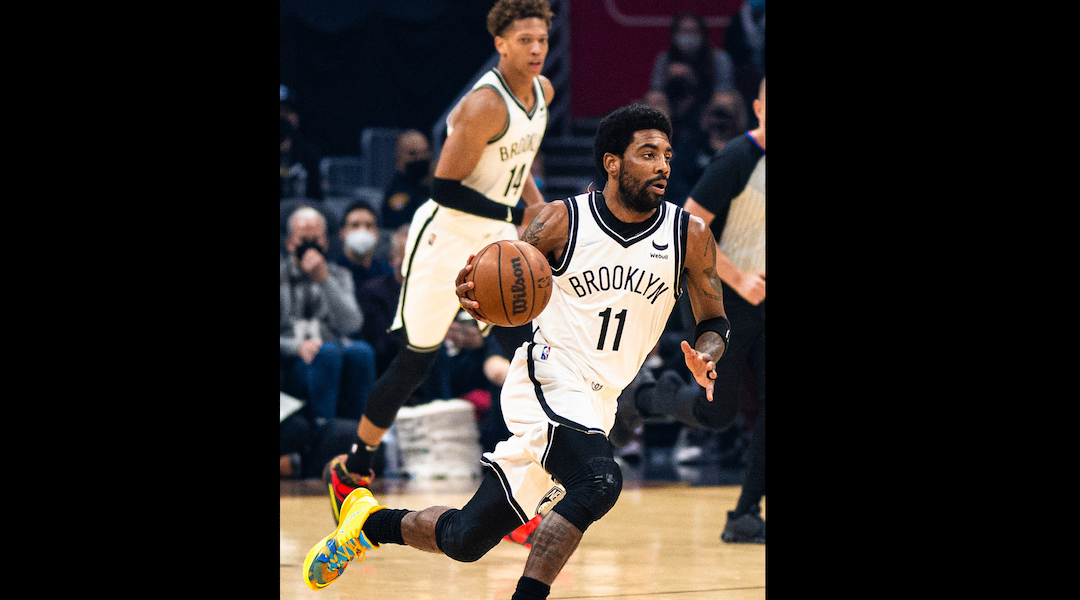 (JTA) — Brooklyn Nets guard Kyrie Irving is defending his decision to promote a movie that argues that Jews were responsible for the transatlantic slave trade, despite criticism from his team’s owner.

“I’m disappointed that Kyrie appears to support a film based on a book full of anti-semitic disinformation,” Nets owner Joe Tsai tweeted on Friday, shortly after Irving tweeted a link to the Amazon listing for a 2018 film called “Hebrews to Negroes: Wake Up Black America!”

The film is based on an earlier book by the same name advancing the oft-repeated false claim that Jews dominated the slave trade. While Jews participated in the slave trade, the claim — advanced by antisemites including Nation of Islam leader Louis Farrakhan and former Ku Klux Klan leader David Duke — is widely understood by scholars and watchdogs as antisemitic. The film and book also argue that Black Americans are the “real” Jews, a belief that is core to Black Hebrew Israelite doctrine.

Irving, who has a long track record of engaging with conspiracy theories, including about COVID-19, said late Saturday night during a press conference after the Nets’ loss to the Indiana Pacers that he did not regret sharing information about the film.

“I’m not going to stand down on anything that I believe in,” he said, according to a report by ESPN. “I’m only going to get stronger because I’m not alone. I have a whole army around me.”

He had previously tweeted, “I meant no disrespect to anyone’s religious beliefs. The ‘Anti-Semitic’ label that is being pushed on me is not justified and does not reflect the reality or truth I live in everyday. I embrace and want to learn from all walks of life and religions.”

Irving’s promotion of the film comes amid a flurry of attention to Jews spurred by antisemitic comments made earlier this month by rapper Kanye West, who has faced a slew of penalties after vowing to “go death con 3 on Jewish people” and boasting that he could “say antisemitic s—” without repercussions. Among the consequences has been the end of his contract with Adidas, which produced his immensely profitable Yeezy line of sneakers.

Irving, too, has had a lucrative contract with an athletic wear company, in his case with Nike. The Kyrie line reportedly generated $11 million in income for him in 2019, but the line was seen as unlikely to be extended because it is unclear whether Irving, a seven-time All-Star, will continue to play in the NBA after this season. (The Nets did not renew his contract after he was unable to play during much of the last season because he refused to be vaccinated against COVID-19.)

The CEO of the Anti-Defamation League, which called for West to have his contract canceled, praised Tsai and the Nets organization for condemning Irving’s promotion of the film. “All of us at @ADL appreciate your leadership and look forward to continuing our discussions,” Jonathan Greenblatt tweeted on Saturday night, prior to Irving’s latest comments.

The Nets “strongly condemn and have no tolerance for the promotion of any form of hate speech,” the team said in a statement issued Friday night. “We believe that in these situations, our first action must be open, honest dialogue. We thank those, including the ADL, who have been supportive during this time.”

Irving’s original post went up at the same time that entrepreneur and provocateur Elon Musk took control over Twitter, emboldening trolls and antisemites who would benefit from Musk’s pledge to loosen content moderation policies on the social media platform. In his comments Saturday night, Irving indicated that he believed his promotion of the film should be accepted speech.

“It’s on a public platform. Did I do anything illegal?” Irving said during the press conference. “Did I hurt anybody? Did I harm anybody?”