Long Island Republicans call on George Santos to resign, citing his Holocaust claims and other lies 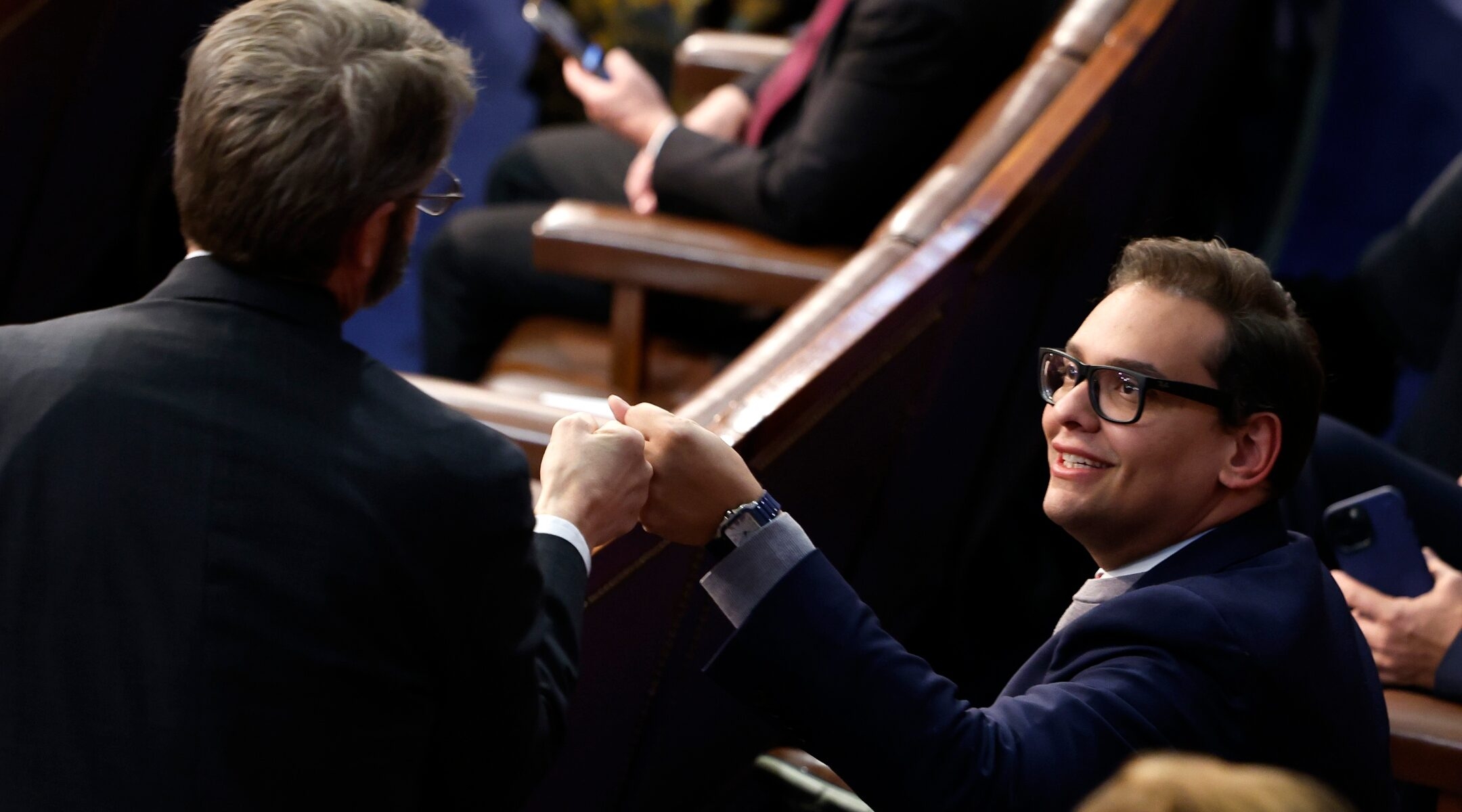 U.S. Rep.-elect George Santos, a New York Republican, greets a colleague in the House Chamber during the fourth day of voting for Speaker of the House at the U.S. Capitol Building, Jan. 6, 2023. (Chip Somodevilla/Getty Images)
Advertisement

WASHINGTON (JTA) –Republican Party officials in Rep. George Santos’ Long Island district called on the serial fabricator to quit, citing among other lies his claims to Jewish and Holocaust heritage.

The call Wednesday by officials of the Nassau County Republican party was significant because the Republican majority in the U.S. House of representatives is precarious — just five members — and the Republican Santos’ 3rd District could easily swing back to Democrats in a special election.

Multiple speakers said his lies about being of Jewish heritage were in particular offensive in a district that includes the Five Towns, which has a large Orthodox Jewish community.

“We go to shul, we go to worship, we take our religion seriously,” said Bruce Blakeman, the Nassau County executive, who is Jewish.

Blakeman said “what was really tragic” was that so many residents of the county are survivors of the Holocaust.

“For him to make up this story, that his parents were Holocaust survivors is beyond the pale. It is simply tragic and outrageous, and disgusting,” said Blakeman. “I join here with my colleagues in government calling for George Santos’ resignation, because he cannot serve anymore. He does not deserve that right. He is a stain on the House of Representatives. He’s a stain on the Third Congressional District.”

Blakeman, who is the top elected official of the populous county, said he instructed his staff to no longer work with Santos, and to refer calls from constituents seeking federal services to Rep. Anthony D’Esposito, the Republican who represents the neighboring 4th District.

State Sen. Patricia Canzoneri-Fitzpatrick said one reason she felt compelled to call on Santos to resign was that her district includes the Five Towns. (It is not in Santos’s district, but there are Orthodox Jewish enclaves in the 3rd District.)

“I am particularly offended also as a representative of the Five Towns and the Orthodox community that what he did regarding his religious status was exceptionally offensive,” she said. “And for them, I stand here and ask that he step down.”

Santos has said he has no intention of resigning, and the GOP Speaker, Kevin McCarthy of California, has not called on him to do so.

Santos wrested the swing district from a decade of Democratic control after the incumbent, Tom Suozzi, retired in a failed bid to run for governor. He defeated his opponent, Robert Zimmerman, who is Jewish, by eight points.

Santos stood by McCarthy during the most contentious intraparty contest for House speaker in a century. McCarthy was forced to deliver major concessions to the extreme right in his party to secure the speakership in a narrow vote, and already faces daunting obstacles in advancing an agenda because of the narrowness of his majority.