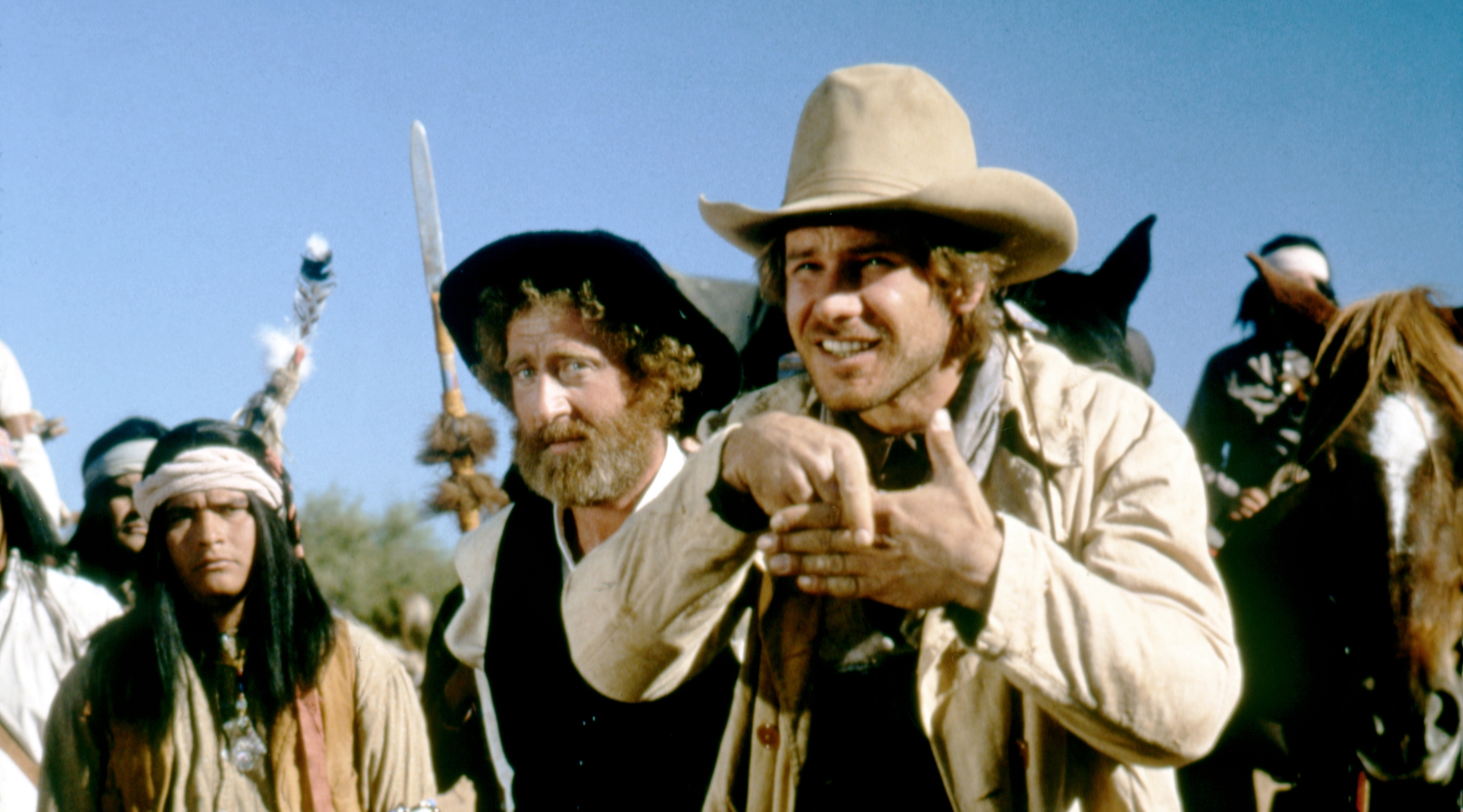 (JTA) — Turner Classic Movies admits that capturing the “Jewish experience” in a series of films is a daunting task, but the network is attempting to do so anyway.

Every Thursday night in January, the channel is showing movies spanning from the 1930s through the 1990s on the theme. According to an article on the TCM website, the series aims to show “how filmmakers have attempted to deal with such themes as assimilation, antisemitism, religion, family life and the Holocaust, sometimes with clarity and honesty, other times with varying degrees of distortion and caricature.”

There are a couple of films in the series set during the Holocaust, but notably none involve concentration camp settings. Instead, the general focus seems to be on portraying comedy, romance and the joy of everyday Jewish life.

Antisemitism does come up often in the Jewish experience, and that is reflected in the films, including in “Crossfire,” a film noir from 1947 about the murder of a Jewish man that helped kick off the series last week. The theme is also prominent in “Fiddler on the Roof,” which also aired on the series’ first night.

Here are the remaining movies to look forward to, in the order in which they will air in EST.

In this film adapted from the novel “To An Early Grave” by Wallace Markfield, four Jewish writer friends — played by George Segal, Jack Warden, Sorrell Brooke and Joseph Wiseman — travel to the funeral of their other friend after he dies suddenly. Though the film was not as well received as other films directed by Sidney Lumet (who started his career as a child actor in Yiddish theater), it includes a Black-Jewish character, which is still rare in cinema today.

Speaking of Jews of color on screen: this movie has a Jewish angel played by Harry Belafonte, whose real-life father was of Jewish descent. The angel visits a poor Jewish tailor, played by Zero Mostel, who starred as the original Tevye in “Fiddler on the Roof” on Broadway. It was directed by Hungarian-born Jew Ján Kadár.

This is the only Woody Allen film in the lineup. Before the scandalous accusations against the director picked up steam again over the past decade, “Annie Hall” was a landmark for American Jews in film, encapsulating the neurotic Jewish New York comedic archetype. Allen plays comedian Alvy Singer who falls in love with the titular character played by Diane Keaton.

This is not a Woody Allen film, but his influence is all over this comedy written and directed by Jonathan Kaufer, in which a New York Jewish television producer played by Saul Rubinek tries to find his perfect woman.

Most of the movies in the series are American, but there are a couple of international films, including this French-Canadian coming-of-age story about a 13-year-old Jewish girl obsessed with the character that Anna Karina plays in Jean-Luc Godard’s film “Vivre sa vie.” Directed by Léa Pool, it’s the most recent film in the lineup, though it is set in 1963. Pool, whose father was a Holocaust survivor from Poland, is one of several women directors represented in the series.

Probably the most famous of the romantic comedies in the series, “Crossing Delancey” was also directed and written by women: Joan Micklin Silver and Susan Sandler, respectively. Amy Irving stars as Isabelle Grossman, a young New Yorker who works for a bookstore and is close with her grandmother — who wants to see her granddaughter settle down. She has a matchmaker set her up with Sam Posner (Peter Riegert), a pickle salesman, and Isabelle is torn between him and the intellectual world. The film also shows the Lower East Side from the era when it was bustling with Jewish immigrant shops and vendors, before gentrification irrevocably changed it.

One can never have too many romantic comedies set in New York. In this one, directed by Israeli-born Menahem Golan, Elliott Gould plays Alby Sherman, a business owner whose wealthy uncle will only loan him money if he breaks up with his gentile girlfriend (Margaux Hemingway). The very Jewish cast also includes Sid Caesar, Carol Kane, Shelley Winters and a very young (and uncredited) Sarah Michelle Gellar.

This pioneering indie film — which according to The New York Times was the first independent American film to be funded primarily by grantmaking organizations — is also is notable for its portrayal of female friendship between Susan Weinblatt (Melanie Mayron), a Jewish photographer, and her ex-roommate Anne Munroe (Anita Skinner), who moves out to get married. Directed by Claudia Weill, who also wrote it along with Vicki Polon, the film is a precursor to so many contemporary indies, including Noah Baumbach and Greta Gerwig’s “Frances Ha.”

Jews are not usually associated with Westerns. But in this comedy, Gene Wilder stars as a rabbi from Poland who is set to lead a congregation in San Francisco. He gets stuck en route in the Wild West and befriends a bank robber played by Harrison Ford. Some scenes don’t hold up in contemporary times, especially ones portraying Native Americans, but TCM doesn’t shy away from showing how stereotypes are part of film history.

This French film is one of the few in the series that takes place during the years of the Holocaust. Louis Malle’s autobiographical film is based on his time at the Catholic school Petit-College d’Avon, at which the real headmaster Pére Jacques (Pére Jean in the film) attempted to hide Jewish children from the Nazis. The film focuses on the friendship of two fictionalized 12-year-old boys, Julian Quentin (Gaspard Manesse) and Jean Bonnet, whose real name is Jean Kippelstein (Raphael Fejtö).

Neil Simon adapted his own play, the second in his semi-autobiographical trilogy about growing up in Brighton Beach, for the screen. Eugene Jerome (Matthew Broderick), a young Jewish Brooklynite, is drafted into the army during World War II and is sent to bootcamp in Mississippi. The movie is helmed by prolific Jewish film and theater director Mike Nichols, who was born in Germany and immigrated to the United States as a young boy in 1939.

Many of the movies selected for this series unsurprisingly take place in Brooklyn, including this one based on Chaim Potok’s 1967 novel set towards the end of World War II. It shows the conflict between different sects of Judaism by focusing on the friendship of two Jewish teenagers — Reuven Malter (Barry Miller), who is Modern Orthodox, and Danny Saunders (Robby Benson), who is Hasidic.

Richard Benjamin stars in this movie based on Philip Roth’s book, adapted and directed by Ernest Lehman. Though the novel — which is written as a monologue from Alexander Portnoy to his psychoanalyst — turned Roth into a celebrity author, the film adaptation was not critically or commercially successful, especially when compared to another Roth adaptation starring Benjamin: “Goodbye Columbus.”

The other Holocaust movie in the series is also from France, and is one of director French New Wave pioneer François Truffaut’s most commercially successful films. The manager of a small theater company in Paris (Catherine Deneuve) hides her Jewish husband (Gérard Depardieu) during the Nazi occupation.

The series closes with another take on Sholem Aleichem’s stories that makes a nice bookend with “Fiddler on the Roof.” Adapted and directed by Maurice Schwartz, who also stars in the titular role, the Yiddish film was thought to be lost until a print was found in 1978. In 1991, it became the first non-English film to be selected for preservation in the library of Congress National Film Registry for its cultural significance.