Brooklyn gyms have an answer to antisemitism: teaching Jews to fight back 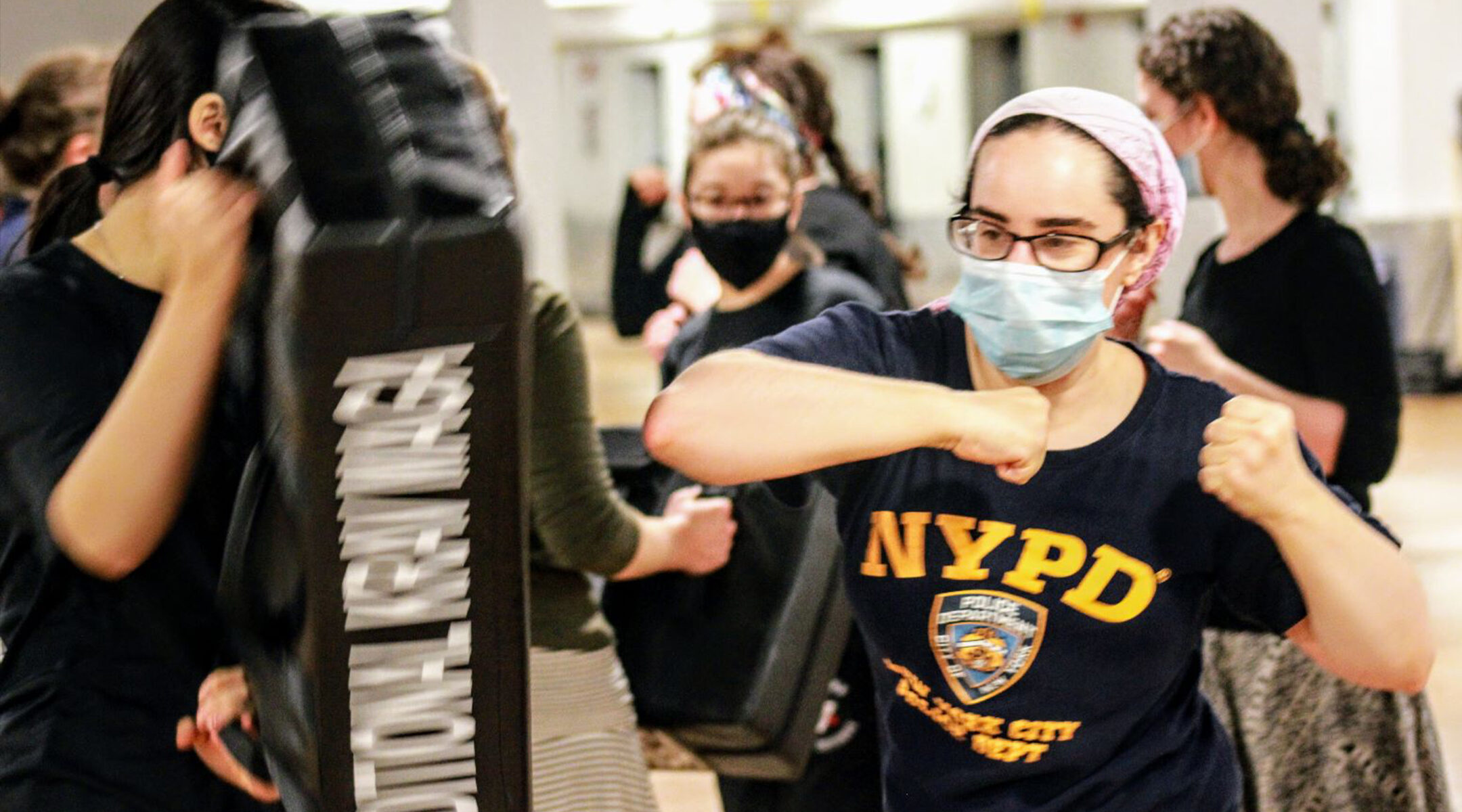 An Orthodox woman takes a fighting class with Guardian Self Defense in Crown Heights. (Courtesy)
Advertisement

(New York Jewish Week) — Emanuel Landsman, a Lubavitch father of five who lives in Crown Heights, found the recent rise in antisemitic attacks to be very concerning. But instead of being afraid, he decided to learn how to fight.

Over the past three years, Landsman has become proficient in the Israeli martial art known as Krav Maga (literally, “close combat”). “I’m a visibly Jewish man,” Landsman told the New York Jewish Week. “I came to train because of all the antisemitic attacks and what was going on around us. I would get hollered at by cars driving by. My kid came home and said others were walking down the street and yelling at him.”

Recently, high-intensity self-defense classes have been popping up in Jewish neighborhoods in Brooklyn, specifically in response to street attacks on Orthodox residents. Last week, an analysis of NYPD data by the Times of Israel showed that antisemitic incidents in New York City have doubled over the past two years.

Landsman learned to fight with a training program called Legion, which has previously held Krav Maga classes in Manhattan and Connecticut. Next month, Legion is making its first post-pandemic expansion to Brooklyn; weekly classes will take place at the Beth-El Jewish Center, a synagogue in Flatbush.

“It’s not a requirement to join our class, but the majority of our members are Jewish,” Legion’s president and former Israeli Defense Forces soldier Corey Feldman told the New York Jewish Week. “Our logo is a Jewish star. It’s pretty obvious who we are and what we stand for.”

Jews are attacked because we’re seen as vulnerable targets. Join Legion Self Defense & send a message to criminals: “you can no longer attack me & expect me not to defend myself.” I had the opportunity to participate in the program for 2.5 years, & acquired life changing skills. pic.twitter.com/bOnAbnwbPF

Feldman added that he is seeing more of a demand for these classes, which include separate classes for men and women, and a mixed class as well. “We already have 40 people in New York City, with many more that wanted to join, but we didn’t have room to accommodate.” Feldman said, adding that as antisemitic attacks on Jews increase, people are “aware of the need for this.”

“We believe that the best way to confront that is deterrence,” Feldman said. “We want to make sure you’re going to think twice before you start pushing that guy on the subway who is wearing a kippah.”

In Legion classes, members work up a sweat through a mix of high-intensity workouts that include punching, kicking, grappling and other forms of martial arts.

The new Legion classes in Brooklyn will be held in City Council member Inna Vernikov’s district, which encompasses parts of Brighton Beach, Sheepshead Bay and Midwood. She told the New York Jewish Week that she’s “very involved” with Legion; she has taken Legion classes herself and said she is working to provide discretionary funding from her district office this year, although she declined to discuss specifics.

“It’s extremely important that every single Jew, especially visibly Orthodox Jews, do this,” Vernikov said. “I’ve seen small, petite women train and gain life-changing skills. You develop an attitude and a confidence that if you walk down the street and use the skills properly, the attacker will avoid you.”

Another Krav Maga program serving Brooklyn Jews is Guardian Self Defense, which was started by Joe Richards, a Jew from Long Island. In 2019, he rented out a room in a Crown Heights yeshiva to teach members of the local community how to fight.

“Across the hall they were having a bar mitzvah,” Richards told the New York Jewish Week. “And then there was us training. We ran these 45 guys hard and pushed them.”

Since then, Richards said he now teaches hundreds of Jewish students through his program. In Crown Heights, he runs three weekly classes for the Lubavitch community in space rented at the local outpost of the gym chain Crunch. GSD also has other locations in Manhattan, Long Island and Florida.

Richards said he started his Brooklyn classes after seeing videos of attacks on people wearing the distinct dress of Orthodox Jews. “Let me bring the training to the area where this is happening,” Richards said. “There were no freaking gyms there. I went into the community and recruited them [students]. And now the people [students] are doing all the recruiting because it’s so popular.”

Members of Shomrim, a neighborhood watch organization in the Orthodox community, are using Krav Maga training to learn how to defend themselves in the field.

Crown Heights Shomrim member Ben Cousin, who trains regularly with GSD, told the New York Jewish Week that “ordinary people” are now learning how to fight in his community through these programs. “They have been victims of antisemitic attacks,” Cousin said. “Some of them have seen it, they feel it, but they are joining because they feel they have to stand up for themselves.” 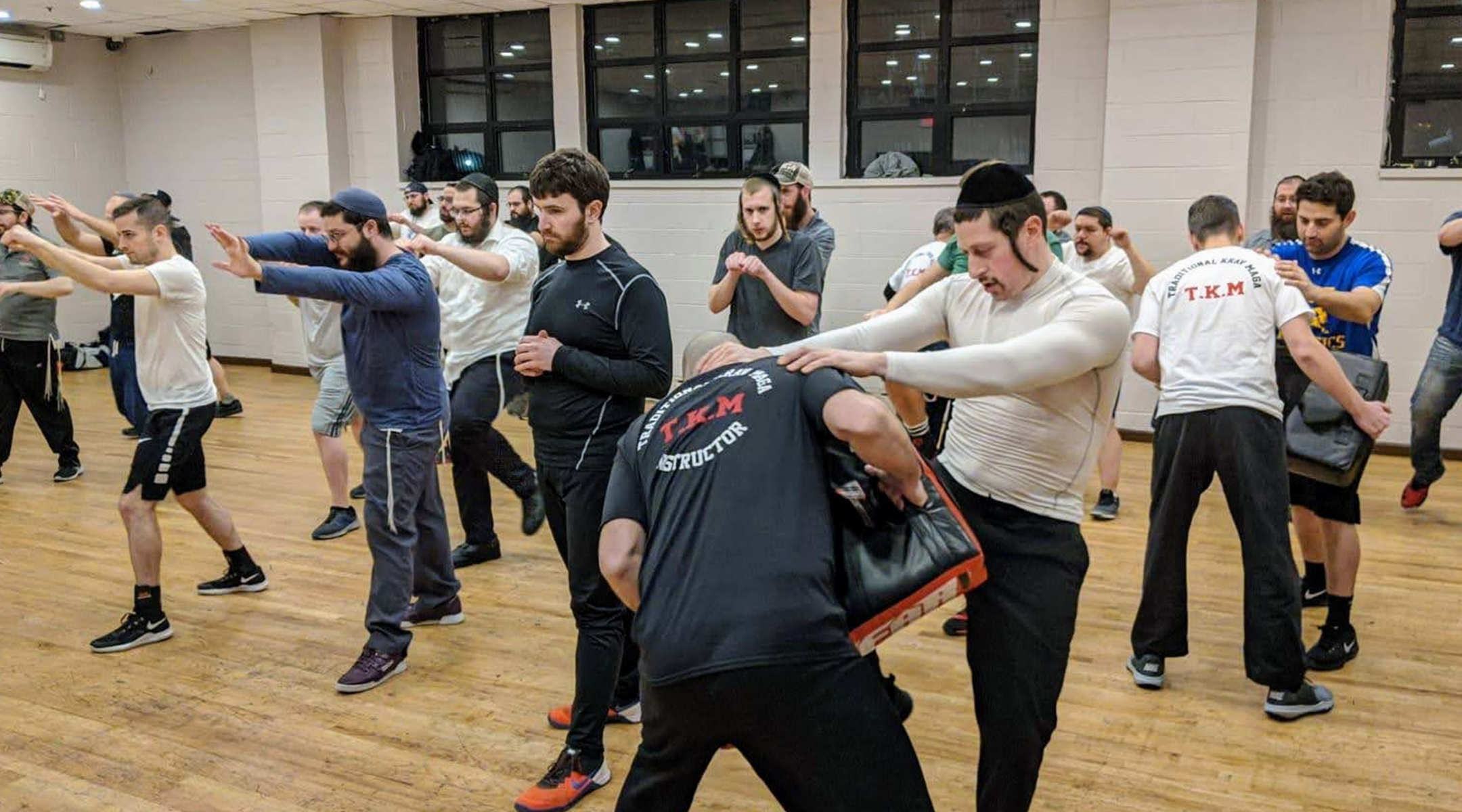 A Guardian Self Defense fighting class in Crown Heights. (Courtesy)

Cousin spoke about how the GSD teaches “de-escalation” tactics, and is not just about fighting. He told a story about when he was on patrol with Shomrim and his team confronted a man after a robbery. “He pushed me,” Cousin said. “Instead of pushing him back, I said, ‘I don’t want to fight you.’ I calmed him down. I apologized. That comes from the training — I don’t want to fight, but I’m ready, just in case.”

“This is a last resort program,” he added. “If you put your hands on us, we will remind you that Jewish blood is not cheap.”

Like Legion’s Feldman, Richards is gearing up for a new group of GSD trainees this year who have heard about his Krav Maga program. Richards is the grandchild of four Holocaust survivors and compared the current rise in antisemitism to what his grandparents experienced.

“The Jews are being targeted everywhere — verbally, online, physically. From the right and left, we are now under siege,” Richards said. “If you’re visibly Jewish, you have a double target on your back. We don’t have the luxury of trying to plan what we should do. Everybody should be taking action.”

“There are plenty of people in this class who had never thrown a punch in their life,” Landsman said of his training with Legion. “I’m not asking you to join the UFC [the mixed martial arts league], but you need to be able to stand your ground and unfreeze yourself when somebody is threatening you with violence. You need to know when to run or when there is no retreat and you have to defend yourself.”