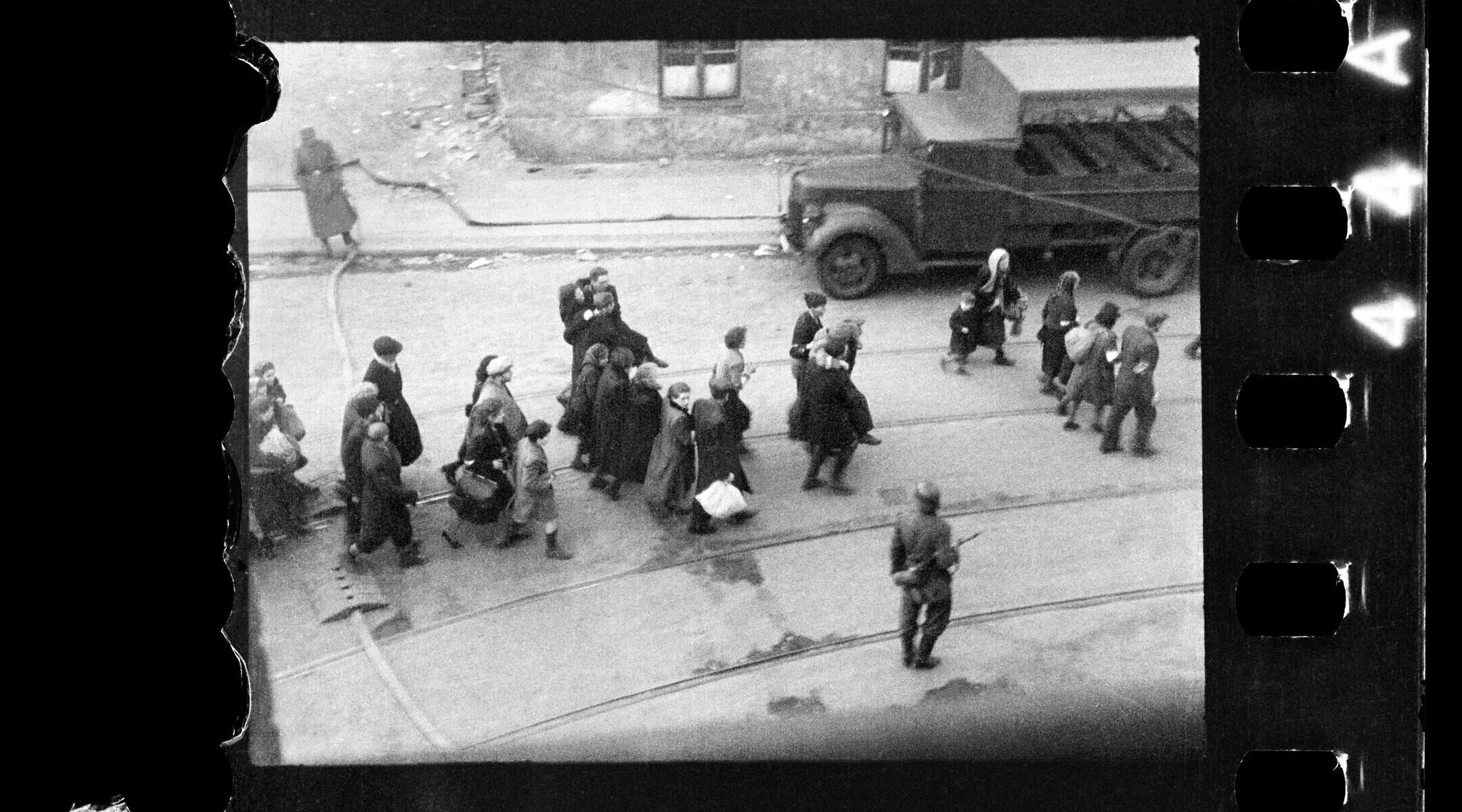 A photograph of Jews inside the Warsaw Ghetto during the uprising there, taken by the photographer Z. L. Grzywaczewski. (Family archive of Maciej Grzywaczewski, son of Leszek Grzywaczewski / Photo from the negative: POLIN Museum)
Advertisement

(JTA) — For the last 80 years, the only way to see images of Jews rising up against their captors in the Warsaw Ghetto has been from the perspective of Germans, who took the only known photographs of the seminal event of Jewish resistance during the Holocaust.

But last month, a roll of film taken by a Warsaw firefighter during the uprising was discovered by his son. The developed pictures offer a previously unseen perspective on the Warsaw Ghetto Uprising according to the POLIN Museum, which announced the find this week.

“The image on them is often blurred, recorded in a hurry, hidden, partially obscured by the elements of the immediate surroundings: the window frame, the wall of the building or standing figures of people,” the museum said in a statement. “The photos, however imperfect, are priceless.”

The pictures were taken by Zbigniew Leszek Grzywaczewski, a Warsaw firefighter whose brigade was tasked with making sure the fire in the ghetto did not spread to the “Aryan” side of the city as the Nazis put down the Jewish revolt. 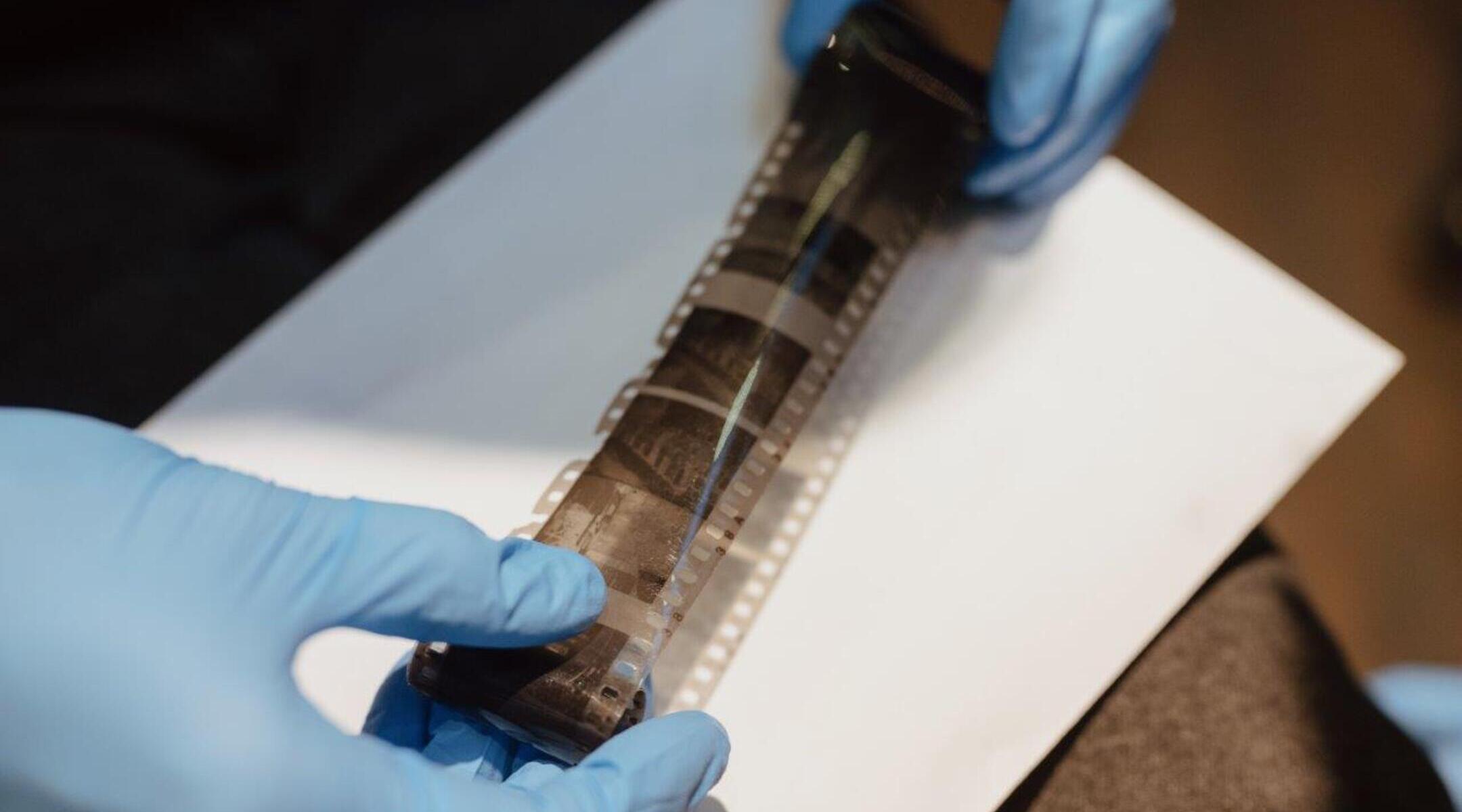 Negatives from photographs of the Warsaw Ghetto Uprising are handled at the POLIN Museum in Warsaw. (Maciek Jaźwiecki / POLIN Museum of the History of Polish Jews)

An estimated 13,000 Jews died during the uprising, which was carefully organized and took place over several weeks in April and May 1943, following the Nazis’ decision to “liquidate” the ghetto, Europe’s largest. Many of them died as a result of the fires.

“The sight of those people taken out of there will probably remain in my eyes for the rest of my life,” Grzywaczewski wrote in his diary in 1943. “Faces (…) with mad, unconscious eyes. (…) silhouettes staggering from hunger and terror, dirty, torn. Shot in masses, some alive fall over the corpses of others already liquidated.”

The POLIN museum, which opened on the 70th anniversary of the ghetto uprising 10 years ago to tell the history of Polish Jews, said the photographs suggest that Grzywaczewski understood the significance of what he was doing. The roll contained 48 shots, 36 of which had never been seen before this month.

“These are the views of smoke over the ghetto, on its streets and backyards, burned-out houses, firefighters putting out the fire, standing on the roof of the house and eating a meal from metal canteens in the street,” the museum said. “It seems that Leszek Grzywaczewski tried to record these scenes as best he could, realizing the importance of documenting the events inaccessible to the eyes of people on the other side of the ghetto wall.”

The differences in lighting between shots, as well as the inclusion of photographs of the Aryan side of the city interspersed among those of the ghetto, suggest that Grzywaczewski entered the ghetto multiple times with a camera, not just on one occasion.

The pictures were found by Grzywaczewski’s son, Maciej Grzywaczewski, who spent months looking through his father’s archive’s collection on the museum’s hunch that there may be something of value there.

The museum plans to display the pictures as part of an exhibition scheduled around the 80th anniversary of the uprising in April.