After Harrowing Journey to Israel, Sudanese Refugees End Up in Jail 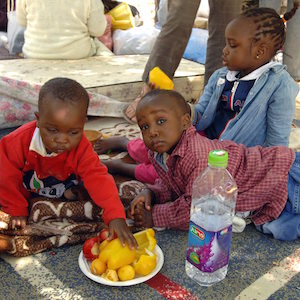 Ali and his sister started running as hard as they could toward the mountains near their village in Darfur when it was attacked and burned by militia forces — but his sister did not run quite fast enough, and was gunned down before Ali’s eyes. Ali, not his real name, eventually made his way to Egypt and then Israel in search of refuge. Instead, he has spent nine months in an Israeli prison along with other Sudanese refugees who await a decision on their fate by Israeli and U.N. officials.

About 160 refugees have come to Israel in the past year, and most of them are being held in prisons or army bases. A law against infiltrators from enemy countries bars them from appealing their cases in court.

A few have been released to kibbutzim, where they are under house arrest.

“I came here for liberty and freedom in Israel, but unfortunately I found something else,” Ali, 30, told JTA by telephone from the Ma’asiyahu prison in Ramle. “I ask the Israeli government to help us, not to punish us, because we have already been punished enough. We need their help.”

Israeli officials say they’re doing what they can to expedite the process of interviewing the detainees and finding them homes in different countries in coordination with the United Nations High Commission for Refugees. Israel will not send the refugees back to Sudan, but the government is not letting them apply for asylum here because Sudan is considered an enemy country.

Some of the asylum-seekers are from the Darfur region, others from other parts of the African country. A civil war in Darfur has morphed into genocide of the region’s non-Arab peoples. Hundreds of thousands of people have died in the conflict, which has been led by government-sponsored militias recruited from Arab tribes who have murdered, raped and prevented humanitarian aide from reaching victims.

“Because of the terrible situation we have seen an influx to Israel. We are working very closely with the UNHCR in Geneva and are trying to find a solution whereby these people can be given refugee status. Obviously no one wants to send them back to where they came from, and we are looking for a third party” which could accept them, Foreign Ministry spokesman Mark Regev said.

Sudanese who cross into Israel from Egypt often are caught by army patrols.

The Hotline for Migrant Workers and the Refugee Rights Clinic at Tel Aviv University recently filed a petition to the Supreme Court against the use of the infiltration law, which is being used to hold the Sudanese asylum-seekers without due process.

The organizations also are asking for the cases of the Sudanese asylum-seekers arrested by the army to be transferred to the Interior Ministry, where they can have access to judicial review within 24 hours. They argue that the Sudanese should be released from prison unless they’re deemed a security threat or are accused of committing a crime.

Lastly, the organizations say the refugees should be allowed to apply for asylum in Israel, just as refugees of other nationalities are permitted to do.

The New Israel Fund, which helps fund the Hotline for Migrant Workers, also has called on Israel to find solutions for the asylum-seekers. They have placed ads in Israeli newspapers demanding their release and launched an online petition to pressure the government.

Eliezer Yaari, director of The New Israel Fund in Israel, said he understands that the legal situation of the Sudanese is complicated because they entered the country illegally — but says he hopes the government will show compassion.

“Israel should find temporary solutions to allow them not to be in jail. Their only crime is running away from a place they could be killed,” he said.

Noting the role of American Jews in pressuring the White House to confront the situation in Darfur, attorney Anat Ben-Dor of the Refugee Rights Clinic at Tel Aviv University said she was hopeful American Jews might use their leverage to pressure the Israeli government about Sudanese here.

“We are lawyers and our work is in prisons and courts, but we do think some political pressure coming from Jews in the U.S. might tip the balance here and maybe change the attitudes of authorities,” Ben-Dor said. “Finding host countries for 160 people is not an easy task, and the fact that people are still detained while all this is happening is outrageous.”

There has been a significant increase in the number of Sudanese crossing into Israel since last December, when at least 28 Sudanese protesters were killed in Egypt when police opened fire to disperse a large crowd. The protest was held outside the UNHCR office in Cairo by Sudanese refugees demanding better conditions and treatment.

Following the demonstration, the Egyptian government announced it would deport 650 Sudanese arrested during the melee who did not have identification papers on them. Word of the planned expulsions further alarmed the refugee community.

Yassin said he no longer felt safe in Egypt, so he decided to make the journey across the Sinai Desert to Israel. He thought that once he arrived and told the story of how his relatives were killed and his village was destroyed, he’d be given help.

“I am looking for freedom and protection. It is hard for me to be all this time in jail,” he said.

Shevy Korzen, executive director of the Hotline for Migrant Workers, said she thinks part of the reason Israel has detained the Sudanese under the infiltrator law is out of fear that the Jewish state could be flooded by refugees.

“There are fears of a huge wave,” Korzen said, referring to the Sudanese asylum-seekers in Egypt. “Israel does not want refugees. Everyone is shocked about murders, but no one wants to take refugees.”

Her organization usually assists migrant workers who have lost their legal status and victims of sexual trafficking who are detained before being deported. Volunteers visit detention facilities to help members of these groups, and it was during these visits that they first encountered the Sudanese.

Korzen said she found it ironic that Israel was using the infiltrator law as a reason not to give the Sudanese a haven as refugees when it was Israel itself that promoted a section in the Fourth Geneva Convention of 1949 requiring countries to exempt refugees from measures they might normally take against enemy nationals.

Israel championed the provision, pointing to the fact that England had given refuge to Jews from Austria and Germany during World War II even though they were citizens of an enemy country.

One of the Sudanese detainees told of being separated from his wife and 2-month-old son during the fighting in Darfur. He does not know their fate.

“Our families have died, others are suffering and we don’t know where they are. We are asking for help quickly,” he said.