After Long Campaign, Jewish Veteran Will Finally Be Honored by U.S. Military 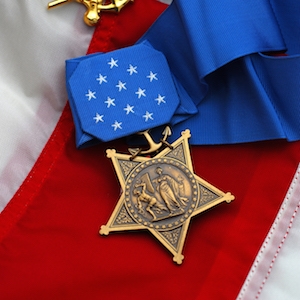 On Sept. 23, as Tibor Rubin enters the White House, generals will stand at rigid attention, President Bush will rise, and then he’ll drape the Medal of Honor, the nation’s highest award for gallantry in combat, around the neck of the 76-year old Holocaust survivor and Korean War veteran. Rubin and a legion of supporters have waited almost 55 years for this moment of triumph of camaraderie and persistence over bureaucratic lethargy and the prejudice that embittered the lives of so many old-time Jewish GIs.

Oddly, Rubin still does not know precisely which of his wartime feats met the Medal of Honor criterion of “conspicuous gallantry and intrepidity at the risk of his life, above and beyond the call of duty, in actual combat against an enemy armed force.”

He guesses it might have been the time he secured a retreat route for his company by single-handedly defending a hill for 24 hours against waves of North Korean soldiers.

Or it might have been any of the other actions that earned him four recommendations for the Medal of Honor by his commanding officers or fellow soldiers, two times for the Distinguished Service Cross, and twice for the Silver Star.

Had he received all those awards, he would have become the most decorated American veteran of the Korean War. What he actually got were two Purple Hearts for combat wounds and a 100 percent disability.

Rubin, known as “Tibi” to his Hungarian childhood friends and “Ted” to his army buddies, was born in Paszto, a Hungarian shtetl of 120 Jewish families, one of six children of a shoemaker.

At age 13, Rubin was transported to the Mauthausen concentration camp in Austria, where he was liberated two years later by American troops. His parents and two sisters perished in the Holocaust.

He came to the United States in 1948, settled in New York and worked first as a shoemaker and then as a butcher.

“I was a handsome dog in those days, and the ladies who worked with me always brought me lunch,” he reminisced fondly.

In 1949 Rubin tried to enlist in the U.S. Army, both as an assumed shortcut to American citizenship and, he hoped, to attend the army’s butcher school in Chicago. He first flunked the English language test but tried again in 1950 and passed, with some help from two fellow test-takers.

In July of that year, Pfc. Rubin found himself fighting on the frontlines of Korea with I Company, 8th Regiment, First Cavalry Division. There he encountered the terror of the company — First Sgt. Artice Watson.

According to lengthy affidavits submitted by nearly a dozen men — mostly self-described “country boys” from the South and Midwest — Watson was a vicious anti-Semite who consistently “volunteered” Rubin for the most dangerous patrols and missions.

Rubin’s bravery during such missions so impressed two of his commanding officers that they recommended him three times for the Medal of Honor. Both officers were later killed in action, but not before telling Watson to initiate the necessary paper work to secure the medals for Rubin.

Some of the men in Rubin’s company were present when Watson was ordered to put in for the medals, and all are convinced that he deliberately ignored the orders.

“I believe in my heart that First Sgt. Watson would have jeopardized his own safety rather than assist in any way whatsoever in the awarding of the medal to a person of Jewish descent,” wrote Cpl. Harold Speakman in a notarized affidavit.

Toward the end of October 1950, massive Chinese troop concentrations crossed the border into North Korea and attacked the Americans. After most of his regiment had been wiped out, the severely wounded Rubin was captured and spent the next 30 months in a prisoner-of-war camp.

Faced with constant hunger, filth and disease, most of the GIs simply gave up.

“No one wanted to help anyone. Everybody was for himself,” wrote Sgt. Leo Cormier Jr., a fellow prisoner.

All except Rubin: Almost every evening, he would sneak out of the camp to steal food from the Chinese and North Korean supply depots, realizing that he would be shot if caught.

“He shared the food evenly among the GIs,” Cormier wrote. “He also took care of us, nursed us, carried us to the latrine . . . He did many good deeds, which he told us were ‘mitzvahs’ in the Jewish tradition . . . He was a very religious Jew, and helping his fellow men was the most important thing to him.”

Survivors of the camp credited Rubin with keeping 35 to 40 people alive, and recommended him for the Medal of Honor, Distinguished Service Cross and Silver Star.

Sgt. Carl McClendon, a soldier saved by Rubin, wrote: “He had more courage, guts and fellowship than I ever knew anyone had. He is the most outstanding man I ever met, with a heart of gold. Tibor Rubin committed everyday bravery that boggles the mind. How he ever came home alive is a mystery to me.”

For some 30 years after his discharge, Rubin lived quietly in a small house in Garden Grove, Calif. with his wife Yvonne, a Dutch Holocaust survivor. The couple reared two children: Frank, an Air Force veteran, and a daughter, Rosalyn.

Rubin finally got his American citizenship in 1953. He tried to resume his old job as a butcher, but crippling afflictions traceable to his war wounds forced him to quit.

It wasn’t until the 1980s that Rubin’s old army buddies started protesting the army’s inaction in recognizing the man who had saved so many of their lives. They were soon joined by others.

The Jewish War Veterans have championed Rubin’s cause for many years and at one point collected 42,000 signatures on a petition presented to President Reagan. But nothing appeared to penetrate the wall of bureaucratic indifference.

Then, in the mid-1990s, the U.S. military, now a model equal-opportunity employer, was forced to revisit its record of discrimination against minorities during World War II and the Korean War.

Responding to criticism that the military consistently had squelched recommendations for high medal awards to minorities, the army, navy and air force started to review their old files.

In 1996 the Pentagon belatedly awarded Medals of Honor to 21 Japanese-American and other Asian-American veterans, and eight to former African-American servicemen who were institutionally segregated during World War II.

Congress passed a bill in 2001 providing for a review of selected Jewish veterans, known as the “Leonard Kravitz Jewish War Veterans Act.” Kravitz, the uncle and namesake of rock musician Lenny Kravitz, was killed manning his lone machine gun against attacking Chinese troops during the Korean War, allowing the rest of his platoon to retreat in safety.

Kravitz was recommended for a Medal of Honor, but the award was downgraded to a Distinguished Service Cross, the second highest decoration.

A year later, under the terms of the Kravitz bill, a list containing the names and wartime records of 138 Jewish veterans was sent to the Pentagon. All the men listed had received the service cross from one of the military branches. The exception was Rubin, though his file was the thickest of all.

Rubin is the 15th Jewish recipient of the Medal of Honor since it was instituted during the Civil War by an Act of Congress signed by President Lincoln, according to archivist Pamela Elbe of the National Museum of American Jewish Military History.

“It would have been nice if they had given me the medal when I was a young handsome man,” mused Rubin. “It would have opened a lot of doors.”

Nevertheless, ex-Cpl. Rubin is deeply impressed that high brass now address him as “Mister” or “Sir” and that he will have an escort of a major and a master sergeant on his way to Washington.

Furthermore, when he wears his medal, tradition requires that even five-star generals salute him and that the president of the United States stand when Rubin enters a room.

He is bound to get a lot of salutes at the White House, and later that day in a ceremony at the Pentagon hosted by Defense Secretary Donald Rumsfeld.

Rubin is allowed to invite 200 guests for the White House ceremony, and among them will be the survivors of his old company and their families. There also will be relatives, but Rubin doubts that his cousins in Israel will be able to make it.

When Rubin was interviewed three years ago, he told this reporter, “I want this recognition for my Jewish brothers and sisters. I want the goyim to know that there were Jews over there, that there was a little greenhorn, a little shmuck from Hungary, who fought for their beloved country.”