America Decides 2004 Under Gaze of Spotlight, Obama is Praised for Bridging Racial Divide 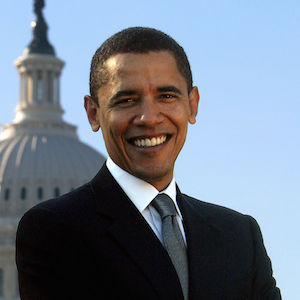 Barack Obama spent a recent Sunday campaigning in black churches in suburban Chicago, explaining the Swahili origins of his first name, which means “Blessed.” His final stop was a Jewish center for the aged, where he told the same story — but added a note about the word’s etymological relationship to its Hebrew counterpart, baruch.

“And he pronounced ‘baruch’ impeccably,” marveled Rep. Janice Schakowsky (D-Ill.), who had spent the day with the man all but sure to become the third African American U.S. senator since Reconstruction.

Obama, whose keynote speech last week was arguably the highlight of this year’s Democratic Party convention, did not come by the pronunciation by chance.

“His connection with the Jewish community was one he made early on,” Schakowsky, who is Jewish, said at the convention.

Long before March, when the Illinois state senator achieved national prominence by trouncing a crowded field of rivals in th! e Democratic primary for one of Illinois’ U.S. Senate seats, Obama and the Chicago Jewish community eagerly had sought each other out, with the goal of reforging the classic black-Jewish alliance of the 1960s.

Jewish backers say comparisons to King aren’t overstated: They see Obama as healing a divide that has grown in recent decades because of disagreements on affirmative action and Israel.

“Obama has reached out, has shown up at Jewish community events, has expressed concern — including support for Israel — in a way that is reassuring,” Jay Tcath, director of Chicago’s Jewish Community Relations Council, said in a phone interview.

Signs of Obama’s ! outreach include attending the American Israel Public Affairs Committe e’s Washington policy conference in May. All congressional candidates get an automatic invitation to the AIPAC conference, but attendance — especially by those who aren’t incumbents — is considered a serious commitment to the pro-Israel community.

Robert Schrayer, a leading Chicago Jewish philanthropist, said he decided to raise money for Obama after the candidate sought a meeting with him.

“We couldn’t find any areas in which we disagreed,” he said in a phone interview, saying they discussed abortion rights, gun control and Israel. “He knew quite a bit about the history of Israel.”

“Our first and immutable commitment must be to the security of Israel, our only true ally in the Middle East and the only democracy,” said Obama, who has a degree in political science and international relations from Columbia University. “The administration’s ! failure to be consistently involved in helping Israel achieve peace with the Palestinians has been both wrong for our friendship with Israel, as well as badly damaging to our standing in the Arab world.”

However, Obama’s full quote appears to direct criticism at the Bush administration, saying its alleged neglect of peace efforts created the circumstances for the building of the fence: “The creation of a wall dividing the two nations is yet another example of the neglect of this administration in brokering peace.”

In follow-up comments, the RJC said that view was problematic as well.

“The failure of the peace process has zero to do with the Israelis and zero to do with the United States and has everything to do with Yasser Arafat,” Matt Brooks, the group’s executive director, told! JTA. “It raises issues about Obama’s understandings of the complexiti es of the area.”

It has not just been a case of Obama courting Illinois Jews — the reverse is true as well.

Obama’s status as the first black president of the Harvard Law Review made him well known among the school’s graduates, said Solow, himself a Harvard law alumnus.

After law school, Obama returned to Chicago in the early 1990s to launch a voter registration drive, and local Jewish graduates of Harvard law were quick to seek him out.

“So many people spoke extremely highly of him,” said Solow, who has headed a number of Chicago-area Jewish organizations.

What makes the Obama-Jewish connection especially heartening, Jewish leaders say, is that it’s not just Jews who welcome the renewed relationship. Obama’s Jewish base excites other black leaders, among them Jesse Jackson, who during his own political career was perceived as exacerbating black-Jewish tensions.

After Obama’s primary victory, when he won 53 percent of the vote in a field of seven ca! ndidates, Jackson made a point of noting Obama’s appeal to Jewish voters.

“At a time there’s so much polarization, so much bitterness and anger and hurt, we need coalition leaders,” Jackson told the Chicago Sun-Times at the time. The Republicans are not running a serious challenger to Obama, meaning he is all but certain to win the seat vacated by Peter Fitzgerald, a Republican.

Obama, 43, credits much of the breadth of his worldview to his parents: His father was a Kenyan goat herder, and his mother is white and from Kansas.

An ability to reach out to a multitude of communities is a given in Obama’s Chicago South Side district. The district includes Hyde Park, home to many upper middle class Jews as well as black, Hispanic and blue-collar white neighborhoods, many gutted by the loss in the 1980s and 1990s of manufacturing jobs.

Carol Moseley Braun, the previous black senator from Illinois, leapt from state-level representation in roughly the same district to ! national prominence. The ability to accommodate a mosaic of ethnic dem ands breaks black politicians out of a parochial mold and prepares them for the national stage, several people who know Obama said.

Rev. Steve Bland, a black minister who has preached in Obama’s constituency, said the reference that most touched him in Obama’s speech was a reference to the jobless in Galesburg, Ill., a town that is almost all white.

“It’s one of those places that if you don’t say anything about it, no one’s going to notice,” said Bland, who was sporting an Obama button as he headed from his hotel to the convention center.

The ability not only to reach across divides but to create sympathies in one camp for the other bodes well for liberal ideals once thought dead, Obama’s backers say.

“He is so inspiring because he represents America,” said Rebecca Rosenthal, a Chicago-area financial adviser who took a break this year to campaign for the Democrats and who was attending the convention as an observer.

Doug Scott, the white mayor of Rockf! ord, Ill., a manufacturing town on the Wisconsin border, noted Obama’s appeal to his white constituents.

“Barack has a tremendous ability to relate to all people,” he said at the convention in Boston.

The vision of an America less divided than its recent reputation was a centerpiece of Obama’s speech. In perhaps the most-quoted passage, he dismissed those who divide America into red states for Republicans and blue states for Democrats.

Such appeals appear to be working.

“If there’s an Arab-American family being rounded up without benefit of an attorney or due process, that threatens my civil liberties,” he said in his speech, prompting a group of Arab-American delegates at the convention to jump up and cheer.

! Back home in Chicago, Jews cheered that passage too, Tcath said.

” It was a safe expression of concern and support for that community,” he said, one that Jews could easily endorse.