Amid Grim News from Katrina, a Jewish Couple’s Infant Survives 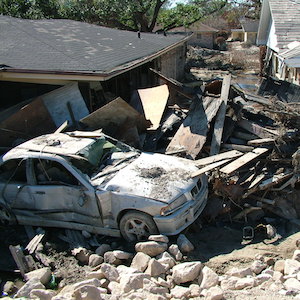 As Hurricane Katrina threatened to destroy their homes and towns, thousands fled the Gulf Coast in search of higher ground, leaving behind a host of valuables — from cars to clothes to albums of sentimental family photographs. But for Tad and Lani Breaux, a Jewish couple from New Orleans, evacuation meant leaving behind something far more precious: their four-day-old child.

Zachary Breaux was in the neonatal intensive-care unit at a New Orleans hospital when his parents were forced to run for their lives, thinking that as in past hurricanes, their evacuation would last only several days. They ended up in Houston, safe but uncertain about their young son’s fate.

Desperate for information, they turned to Adam Bronstone, the director of the New Orleans Jewish Community Relations Council and the head of communications for the Jewish Federation of Greater New Orleans.

Bronstone, in turn, contacted several potential sources of information, including U.S. Army officials, in a frantic attempt to track down baby Zachary.

They found him in the late afternoon on Sept. 1, Bronstone said.

Zachary, it turned out, had himself been shuttled out of New Orleans as the storm powered its way toward the Gulf. He had been put on a plane along with 60 adults and three children and shuttled to Cook Hospital in Fort Worth.

Later that evening, Tad and Lani Breaux were reunited with their missing child. They were flown to Fort Worth aboard a plane provided by Angel Flight — a nonprofit organization of pilots and other volunteers that arranges free transportation on private aircraft in response to medical and other compelling human needs.

Amid scenes of growing chaos and despair, the reunion was a welcome bit of good news. Mostly though, developments in the region were disheartening.

The official death toll is less than a hundred but is predicted to climb into the thousands in Katrina’s devastating aftermath. Last week, reports of looting, violence and general lawlessness saturated newspapers and television news programs. Hunger and fear of disease in affected areas engendered anger and disbelief as the federal government’s handling of the crisis garnered sharp criticism.

Meanwhile, Houston was quickly becoming a haven for victims of the destructive storm who have been left, for the moment at least, without homes.

Some 15,000 Louisiana evacuees were being housed in the Astrodome, the city’s well-known covered sports stadium, after conditions in the New Orleans Superdome grew unbearable. Houston is hosting tens of thousands of evacuees.

The Jewish Federation of Greater Houston has sprung into action to aid the beleaguered evacuees, Jew and non-Jew alike.

The organization has joined an interfaith coalition taking responsibility for feeding the Astrodome influx for the next 30 days, a service that the federal government is not providing, the federation’s CEO, Lee Wunsch, told JTA. The effort will require 700 to 800 volunteers each day and is expected to cost between $7 million and $8 million.

“We’re trying to raise the money to make a sizable contribution to that,” he said. Between Sept. 1 and 2 alone, the federation had raised about $75,000 in online donations. More money was coming in from other sources as well, Wunsch said.

“This is what we’re all about,” he said. “This is why I started working in the Jewish community 35 years ago — to do what we’re doing right now.”

A number of New Orleans families are now living with families in Houston, Wunsch said, and local day schools are allowing students from New Orleans to enroll for free. The Maimonides Society, a group for local Jewish doctors, has been mobilized to help those evacuees with medical concerns, and several local rabbis are coordinating an effort to ensure that their Jewish religious needs are met.

Synagogues in the Houston area are providing free Shabbat meals and are expected to open their doors to evacuee families both in the immediate future and during the High Holidays.

At Congregation Beth Yeshuran in Houston, members are making room in their homes for those with no place to go and have prepared welcome packages of toiletries, snacks and beverages. The synagogue was also arranging kosher meals for those who want them, and it is planning to send more than 250 volunteers to the Astrodome this week.

The community response has been swift and overwhelming, say those involved in coordinating area relief efforts.

“I’m 150 e-mails behind,” said Bronstone, who fled New Orleans on Aug. 27 and has since been working at the Houston federation office and living with a friend. “There’s one guy here answering four phones at a time.”

The situation, Bronstone said, is “crazy, it’s surreal, it’s loving, its warm. It’s the worst of times — but it’s also the best of times.”

Hurricane damage in the region was staggering. As of last Friday, however, it remained unclear how sites of Jewish concern fared in the storm. Those with knowledge of New Orleans geography said that, based on news reports about damage to particular neighborhoods, they suspected that some buildings, including a Jewish museum, were badly damaged or destroyed.

The New Orleans federation was coordinating with several volunteers planning a return to the area early this week and was expecting to receive word on the condition of Jewish buildings from them.

After a grueling 12-hour trip in a three-car convoy, Rabbi Mendel Rivkin, the program director at Chabad Lubavitch of Louisiana, arrived in Houston.

“Just in the Chabad House-Tulane area, though the flooding was not that bad (when we left), the downed trees and power lines and the debris completely cover the streets,” he wrote in a posting on the Chabad of New Orleans’ Web site. “Chimneys fell. Pieces of roofs are off. Siding and gutters litter the yards. Gates are down. My car’s back window was smashed by a piece of debris that fell off a roof on Broadway.”

Other postings listed New Orleans families who had been heard from or were known to be safe.

In addition to the 5,000 or so Jews thought to have landed in Houston, Jews also ended up in Birmingham, Ala.; Nashville; Atlanta; Austin, Texas; Dallas; cities in Florida; and elsewhere.

Many also fled to Memphis. The Orthodox Union dispatched Rabbi Chaim Neiditch on a fact-finding mission to Tennessee.

“They’re living Jewish lives as best as they can,” said Neiditch, the director of the southern region of the O.U.’s National Conference of Synagogue Youth. They are attending prayer services and eating kosher food, he said, but there is a real fear that the community, stretched to its limits by the influx of evacuees, will run out of kosher food.

“There is a sense of despair and worse — every single possession is lost, jobs gone. They are separated from family and friends. They have no means of communicating with each other,” he said. “It is beyond comprehension what is going on.”

Students from New Orleans have already enrolled and started taking classes at the Margolin Hebrew Academy in Memphis, Neiditch said.

Among other problems Neiditch reported to the O.U., relayed to JTA by e-mail, New Orleans banks are closed and evacuees don’t have mailing addresses where they can receive money. The community is also working to get medication for a girl with diabetes.

Jewish organizations in the hard-hit region and beyond pitched in to help those whose lives have been disrupted by Katrina.

“Each of us is potentially vulnerable to the fury of Mother Nature, irrespective of where we live, the religion we practice or the lifestyle we lead,” said David Harris, the AJCommittee’s executive director. “Those of us lucky enough to be safe and secure are obliged to lend a helping hand to those less fortunate. Today it is our moral imperative to respond to the needs of our fellow Americans in the South.”

The disaster relief fund of the United Synagogue of Conservative Judaism has begun collecting donations. The group is also exploring alternatives preparations in case other items, such as clothing, are needed.

The USCJ also distributed a special prayer, written by two of its members. It reads, in part:

“In the path of Katrina’s destruction, let the good in humanity rise to the top of the flood. Give us strength to console those who have lost family, friends and neighbors. Give us the courage to provide hope to those who despair. Provide us with the guidance to heal those who ail, both in body and in spirit.

Local federations throughout the United States and Canada have also established funds to aid those in need in the hurricane’s aftermath.

Hillel: The Foundation for Jewish Campus Life is mobilizing locally and internationally to help those devastated by Hurricane Katrina. The Hillel Foundation in Houston will be the center of the organizations’s activity, opening its doors to evacuees and volunteers.

The Edgar M. Bronfman Center for Jewish Student Life at New York University set up a volunteer student delegation that was to travel to Houston over the weekend to aid those taking shelter there.

Mazon: A Jewish Response to Hunger made a $5,000 emergency grant to America’s Second Harvest, the nation’s largest charitable hunger-relief organization, which is now working to bring more than 5 million pounds of food to the beleaguered region.

The Union for Reform Judaism’s Henry S. Jacobs Camp in Utica, Miss., was opened to some 150 New Orleans residents fleeing the storm, including some disabled adults.

The union used its disaster-relief fund to aid those affected by Katrina. It has also opened a hurricane relief line and created extensive Web-based communications resources including an area on its Web site where members of four Reform temples in southeast Louisiana — Touro Synagogue, North Shore Congregation, Temple Sinai, and Congregation Gates of Prayer — can share their whereabouts with colleagues and friends.

A group of Chabad-Lubavitch centers in Texas, Tennessee, Alabama, Florida and Georgia is arranging for housing and kosher food for Jews who need them and is marshaling volunteers to aid victims.

The United Jewish Communities, the umbrella organization of the North American Jewish federations, established an emergency mailbox to accept donations to aid both the Jewish and general communities affected by the hurricane. In advance of the storm, the UJC offered technical expertise to federations and to its network of independent communities.

According to Barry Swartz, the UJC’s senior vice president, the organization had raised upward of $1 million as of last Friday.

“We’re working on developing plans with local communities where the evacuees are,” he said.

Meanwhile, as Shabbat approached, relief work in Houston went on.

“We have mobilized our community around all the areas that seem to be current and potential needs,” Wunsch said. “There’s a lot of activity. People are very generous with their time. Our phones have not stopped ringing.”