After Lean Years, Uganda’s Jews Finally Have Their Day at the Mikvah 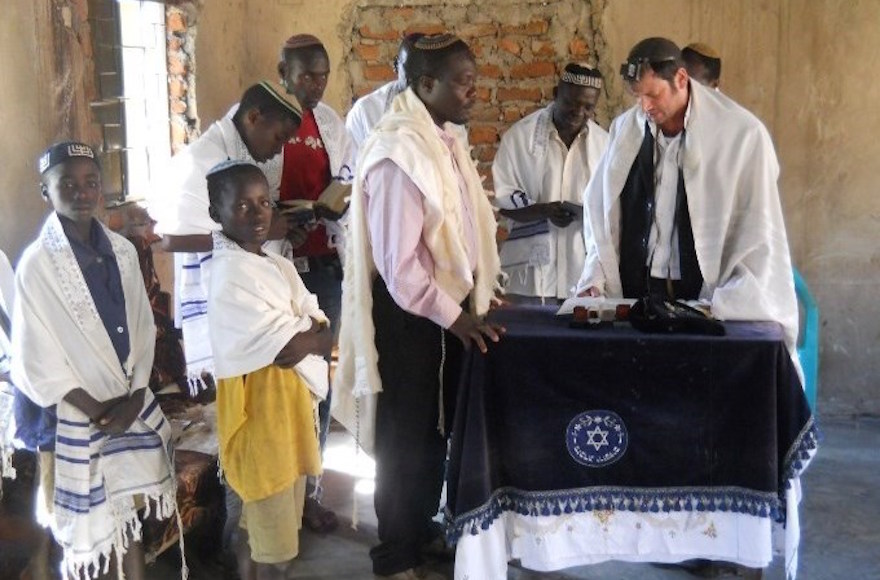 Capping a Jewish story of struggle and survival, Uganda’s Jews just got dunked in the mikvah.

Four Conservative rabbis from the United States and one from Israel joined the community’s spiritual leader, Gershom Sizomu, in supervising the conversion of most of Uganda’s 600 Jews, a several-day affair that concluded Tuesday.

Sizomu, who recently returned to Uganda from a semester of rabbinical studies at Hebrew Union College in New York, the Reform movement’s theological seminary, is thrilled that the 83-year-old Jewish community has converted according to halachah, or Jewish law.

As such, it should now gain more legitimacy in the eyes of the Jewish world, he says.

Sizomu also is being pragmatic.

There are more men in the community than women, and most members of the community are related. Recognition by other Jews will expand members’ opportunities to marry and sustain their community, known as Abayudaya, a local term that means “the people of Judah.”

The community lives on the outskirts of Mbale, the third largest city in Uganda.

After several intense days, two-thirds of the Abayudaya — some 400 people in all — were converted. Most of those who chose not to undergo the conversion cited sickness or travel complications.

A few claimed their Jewishness didn’t need an outside stamp of approval.

For most, though, the conversion went off without a hitch. Neither the neighboring Muslims nor the ABC televison reporter who trailed behind the group made problems.

“We are at peace with everybody!” said Sizomu, who described a newfound “connection between Uganda and the rest of the” Jewish world.

Sizomu and the rabbis divided into two religious courts, where they confirmed each community member’s commitment to Judaism before sending each family off to the synagogue’s mikvah or the local Namatala River.

The males of the community had been circumcised at birth, yet they agreed to undergo “a hatafat dam brit,” a symbolic procedure to extract a droplet of blood from the penis.

It was just “a small poke,” one of the rabbis explained, but young boys who feared a second circumcision screamed anyway.

The Jews of Uganda trace their roots to Semei Kakungulu, the local agent of British imperialists at the turn of the 20th century.

In addition to carrying out political orders, Kakungulu was to be a missionary for the British, converting the people of Mbale to Christianity.

Unfortunately for England, Kakungulu favored the Hebrew bible, and spread its teachings instead of the Christian one.

It therefore came as little surprise when the British fired Kakungulu in 1917. Around that time, he took on the task of circumcising himself — when he was almost 50 years old — along with his two grown sons and the 3,000 men of the community.

Two years later, the city began referring to the community — pejoratively — as Abayudaya when members began practicing the Orthodox Judaism they maintain to this day.

After Kakungulu’s death in 1928, many members left the Abayudaya for gifts that came with a price. The nearly naked Abayudaya could have education and clothing — if they accepted Christianity.

As their countrymen opted for modern conveniences, the dwindling Abayudaya could be recognized by their traditional Ugandan clothing, such as animal hides and “back cloth” made from the bark of a tree.

Sizomu’s grandfather held together what was left of the community from 1936 to 1992.

During that period, the community experienced both a blessing and a curse: In 1962 Israel opened an embassy in Uganda, bringing clothing to the country’s 1,000 remaining Jews and prayer books to their 36 village synagogues, but in 1971 Idi Amin came to power, banning Jewish practice and ordering Jews to convert to Christianity or Islam.

Amin took 32 synagogues for public use and shut the Israeli embassy, which never reopened. The countries renewed diplomatic ties in 1994, but Uganda today is served by the Israeli ambassador in Kenya.

Although Sizomu was too young to suffer from Amin’s repression, he remembers his father being tortured for building a sukkah, the fatal beatings of community members who collected remnants of a synagogue roof that had blown away in a storm and the caning of older brothers and sisters who refused to weed crops in the school gardens on Saturdays.

Amin was overthrown in 1979 — two days before Passover, Sizomu recalls.

“It was a real celebration of freedom. We had a practical Pesach,” he said. “Whenever it’s Pesach, we remember that wonderful time in 1979,” when they felt like the Jews freed from Egyptian bondage.

About fifteen years later, an American organization called Kulanu — Hebrew for “all of us” — that aids lost and dispersed Jewish communities learned about Abayudaya, and has been working with the community since.

Kulanu established a scholarship fund to help the community’s 150 children attend primary and secondary school, and coordinated the mass conversion.

At the community’s request, Kulanu initially wanted Orthodox rabbis to perform the conversion. They declined, saying Mbale didn’t have enough of an Orthodox infrastructure — butchers, day schools and the like — to sustain an Orthodox lifestyle.

Now, after his experience at the Hebrew Union College, Sizomu plans to reshape his community’s brand of Judaism. The different kinds of Judaism he found in the United States are good for preserving the Jewish people from assimilation, he said.

He hopes to develop in Uganda a “Reconstruvodox” Judaism — a mixture of Orthodoxy and Reconstructionism — to allow women more influence, including the opportunity to become religious leaders.

Although he’ll miss New York Jewish life — the Chanukah menorahs in government windows, the Shabbat wishes of neighbors and pedestrians on Friday night — Sizomu has much to celebrate at home.

In addition to the recent conversion, Sizomu’s brother, Joab Jonadav “J.J.” Keki, recently became the sub-county chairman over 32 villages and more than 25,000 people. That gives him control over police and military forces — and makes him the first Jew in Uganda to win political office.

Also on Tuesday, the day they completed the conversions, the visiting rabbis officiated at Sizomu’s wedding. Most of the community took part, their high-pitched instruments blending with background laughter as Sizomu talked to JTA by telephone.

“The rabbis were dancing up and down!” he said, adding that they plan to wed five more couples before leaving Uganda.

The Conservative rabbis, who do not represent an official delegation of the Rabbinical Assembly or the Conservative movement, seem almost as excited as the Abayudaya themselves about taking part in the conversion.

“It’s terrific, and I feel honored to be part of this,” said one of the officiating Rabbis, Howard Gorin of Tikvat Israel Congregation in Rockville, Maryland.

Gorin said he is “incredibly impressed that people in the middle of Third World poverty still maintain their Judaism to the extent that they do.”

Maybe that’s what Karen Primack, a Kulanu staffer, meant when she praised the “Ugandan miracle.”