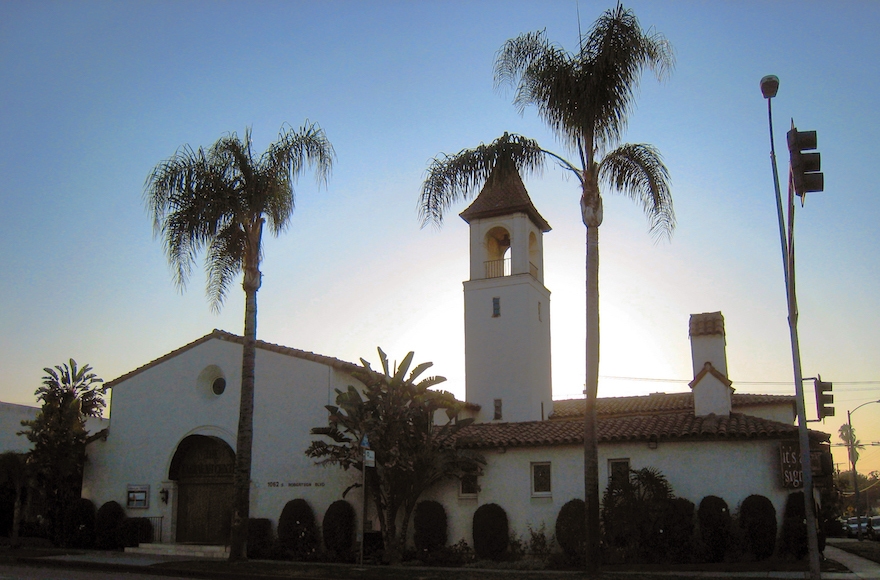 David Shamouelian thinks he has tapped into what he thinks is a sure-fire marketing tool: Four thousand years of Jewish mysticism.

“How do you explain this? You walk into the store and want to buy a blouse for yourself but you end up buying a dress, why? Because there is internal energy in the clothes,” says Shamouelian, whose clothing company,

Sharagano, has signed an exclusive deal with the Los-Angeles-based Kabbalah Center to market clothes using the once-sacred symbols of the Kabbalah. “The product is drawing you to it, not the other way around,” he says. “That is what we learned from the Kabbalah 4,000 years ago at the time of Abraham.”

Shamouelian hopes that supernatural forces will draw shoppers straight to his new clothing line inspired by the 72 Names of God and the teachings of The Kabbalah Center, which offers courses in Jewish mysticism and spirituality.

He has already released the first of a series of designs: T-shirts inscribed with the Hebrew letters lamed, alef and vav, one of the 72 divine names in kabbalistic teachings. The shirts, retailing from $32 to $40, will be available through SharaganoParis.com and 72namesofGod.com, with all proceeds going to the Kabbalah Center.

The center teaches that “these three letters give you the power to conquer your ego . . . Simply focus your eyes on the letters, then visualize destroying your ego, ” says an advertisement for a white baby-tee tank top.

The creative spark for the clothing line came from a video made by the one superstar who in so many ways defines the word ego — Madonna.

The singer has studied at the Kabbalah Center for six years, and in the video for “Die Another Day” — the title song for the newest James Bond movie — she has lamed, alef and vav tattooed on her arm

The letters aren’t the only Jewish symbols in the video, which has stirred some controversy since its release. In it, she also wears phylacteries associated with Jewish praying, and is electrocuted in a chair bearing Hebrew markings.

Tattoos are forbidden by Jewish law, and traditionally, tefillin is worn only by Jewish men.

Madonna is no stranger to religious controversy.

Her 1989 “Like a Prayer” video drew criticism from some Catholic leaders offended by her depiction of a black man being crucified, playing the role of Jesus.

But Madonna’s teachers at the Kabbalah Center are not offended by her video.

Madonna “always does her thing,” said Rabbi Yehuda Berg, who is also the author of the book “The Power of Kabbalah.” The performer “doesn’t have anything against Judaism.”

Berg is releasing another book called “The 72 Names of God” in the spring, potentially a wonderful accessory to the clothing line.

The center was founded in 1922 in Jerusalem by Rabbi Yehuda Ashlag.

He was the first modern kabbalist to say “in today’s world everybody can study Kabbalah,” Berg said. “Even non-Jews can study.”

Ashlag’s teaching are now disseminated through more than 50 international offices of the Kabbalah Center, including locations in far-flung places like Venezuela, the Ivory Coast and Moscow.

While the center does not have an official membership base, it has more than 150,000 subscribers on its mailing list in the United States — and almost that many in Israel where there are five centers.

But Berg says he hopes the Kabbalah “is going to have” an even “wider reach” as a result of the new clothing line, Berg said.

We want to “bring it out to the masses,” said Shamouelian, who says his commercial quest may also be a spiritual one.

“Clothing makes someone look good outside and inside; it helps people connect to their inner being,” he said.

The 24-year-old designer was born in Iran but moved to New York when he was 2.

He got involved with the Kabbalah Center 14 years ago. “I had a semi-religious background, did not understand how we do things, I asked the rabbis and scholars why are we doing this? What is the meaning of the Shabbat?” The meaning of the commandments? “Everybody gave me the same answers: because this is what we have to do.”

Disillusioned, Shmouelian thought, “if this is Judaism I don’t want a part of it.”

But then his mother introduced him to the Kabbalah Center. After the first class, “all my questions were answered,” he said.

Traditional Jewish law requires that students of Kabbalah are scholars, at least 40 years old and married.

The Kabbalah Center calls this form of study “the secrets of the Bible.”

We “don’t touch that,” Shmouelian says. The center’s classes offer what he calls a “taste of Bible,” general principles for life and spirituality.

Books like Berg’s “Power of Kabbalah” distills “ancient, long-hidden wisdom” into a “highly accessible, eminently practical form.” The book is described on the center’s Web site as “both lighthearted and profound.”

Which may explain the center’s popularity among Jews and non-Jews, celebrities and just regular people alike.

A spokeswoman for the center said the string has been wrapped around Rachel’s Tomb near Bethlehem and is purportedly imbued with the biblical matriarch’s energy, protecting the wearer against the negative influences of the Evil Eye. The Kabbalah Center sells a packet of six strings for $26.

Celebrities such as Elizabeth Taylor, Rosie O’Donnell, Roseanne and of course Madonna have been known to wear the bracelet — an attempt to ward off the evil lens of paparazzi, perhaps?