Bush Counsels Patience on Mideast in Chanukah Meeting with the Jews 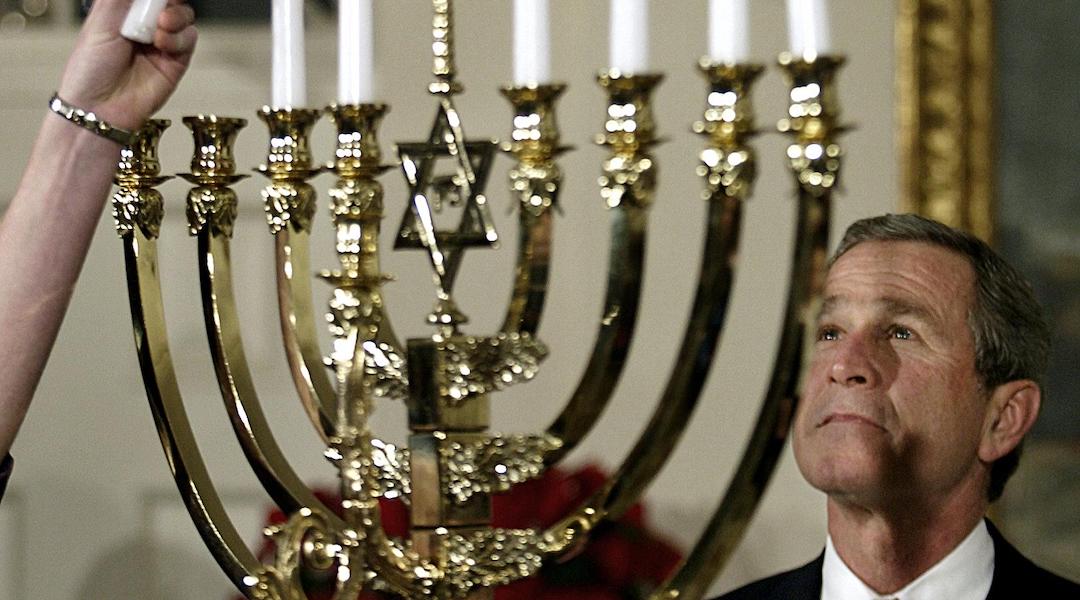 Israeli Prime Minister Ariel Sharon may have set a six-month ultimatum for the Palestinians — offering them partnership or pullout — but President Bush is counseling patience and adherence to existing peace initiatives.

Bush met with Jewish lay and communal leaders at the White House on Monday for the traditional annual Chanukah celebration.

Participants said the meeting was warm and friendly, with the Jewish leaders congratulating the president on his recent foreign policy successes, including the capture of Iraqi despot Saddam Hussein and Libya’s pledge to end its weapons of mass destruction programs.

Bush also initiated a discussion on the resurgence in Europe of anti-Semitism, saying it was America’s role to set an example in respecting the rights of the individual.

A central topic of conversation was Sharon’s speech last week warning the Palestinians that unless they crack down on terrorist groups and return to peace negotiations, Israel would pull out unilaterally from parts of the West Bank and Gaza Strip and set its own border.

That border would be less favorable to the Palestinians than what they could achieve through negotiations, Sharon said.

A participant in Monday’s hourlong meeting asked Bush if he thought Sharon’s threat was sincere.

Bush nodded yes, saying he understood Sharon’s position even referring to the prime minister by his nickname, Arik.

“Arik has a job like mine: His job is to protect his people,” the participant, who asked not to be identified, quoted Bush as saying.

Bush added, however, that he wants Israel to be patient and stick to the U.S.-led “road map” peace plan, which envisions a Palestinian state and an end to terrorism by sometime in 2005.

“We need to be patient and wait for a new Palestinian leader to emerge,” Bush was quoted as saying, adding that he has high expectations of Ahmed Qurei, the new Palestinian Authority prime minister.

Israelis are frustrated with Qurei because he has been slow to distance himself from P.A. President Yasser Arafat, whom Israel and the United States reject as untrustworthy.

Bush made clear that he wants Israel to wait for Qurei, and also that he won’t venture too deeply into the peace process unless he’s relatively sure of the outcome.

“You all need to be patient. Presidential capital is not to be wasted,” a participant quoted Bush as telling the group.

The administration has avoided speculating on what might happen if Sharon makes good on his threat, focusing instead on Sharon’s immediate promises to ease conditions for the Palestinians.

State Department spokesman Richard Boucher said Tuesday that the administration had noted the “specific steps” Sharon had promised to take, but added: “We avoided speculating on some of the things he said might/could be down the road.”

In his speech last week, Sharon said he prefers to follow the road map, and White House officials have said Bush was mollified by Sharon’s commitment. Bush also was adamant that Sharon not use Israel’s West Bank security barrier, now under construction, to set the borders of a future Palestinian state.

“I understand the need for the fence, it’s a security barrier, but part of the route is problematic,” Bush was quoted as saying in the Monday meeting. Referring to Libya’s surprise pledge to cooperate with arms inspectors, Bush said Israel needs to be patient if it expects similar commitments from Syria and Iran — implacable foes with reported plans to obtain weapons of mass destruction.

The United States has imposed sanctions against both countries, Bush said, but nothing will happen until major trading partners of those nations — especially in Europe — join in.

“We need to bring the Europeans around when it comes to Iran and Syria,” Bush was quoted as saying. “Everything with the Europeans is a process.” Bush has much on his plate headed into 2004.

The government has set a June deadline for conferring self-rule on the Iraqis, and the U.S. presidential election will heat up around March, when Bush’s Democratic opponent likely will be apparent.

With such preoccupations, Bush has made clear that he won’t be drawn into the Palestinian-Israeli conflict until he is assured of results — a stance not untypical for a president in an election year.

At the public Chanukah celebration after the meeting with the Jewish leaders, Bush never mentioned Israel, instead praising U.S. servicemen and servicewomen in Iraq.

“We pray for the brave men and women of our armed forces, many of whom are spending the holiday season far from home and their loved ones,” he said.

Two Jewish Marines, including one who served in the Iraq war, lit the menorah with their six-year-old sons.

Bush appeared relaxed and confident, watching with a bemused smile as the University of Maryland’s Kol Sasson chorale attempted a gospel rendition of Maoz Tsur.

Participants said the mood was upbeat and festive.

“The man and his commitment to Israel were very much in evidence,” said Malcolm Hoenlein, executive vice chairman of the Conference of Presidents of Major American Jewish Organizations.

“He implied it’s a U.S. responsibility to show Europeans the need to address it, he was forceful and talked about it as a fundamental value,” Hoenlein said. Bush also related anti-Semitism to the issue of anti-Israel incitement among the Palestinians.

David Kessel, Hillel director at the University of Texas at Austin, called the mood “intimate.”

“It was a nice comfortable ambience,” he said.

Still, it was clear that Bush wanted to remain in control of the relationship with the Jewish community.

About half the participants, who were unknown to mainstream lay leaders present, apparently were invited because of their support for Bush. Bush also left only a few minutes at the end of the meeting for questions.