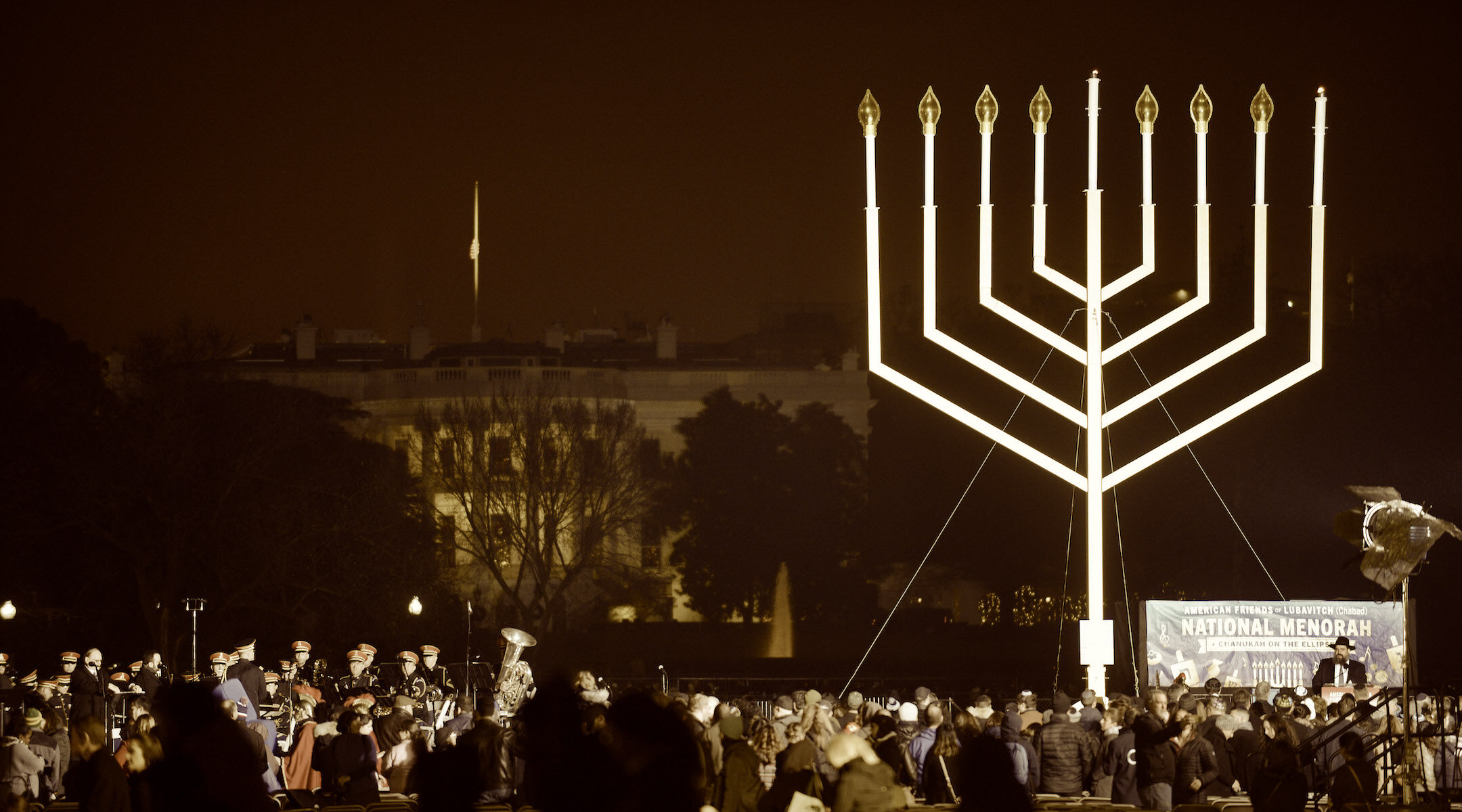 The 30-foot-high D.C. Hanukkah menorah, seen in 2018, was first lit by President Jimmy Carter in 1979. (Astrid Riecken For The Washington Post)
See Original Daily Bulletin From This Date
Advertisement

In an historic ceremony with two menorahs on the fourth night of the “Festival of Lights,” President Carter last night medicated the National Chanukah Menorah in Lafayette Square, opposite the White House, and acclaimed the holiday’s significance for human freedom everywhere.

Both he and Lubavitcher Rabbi Abraham Shemtov, alluded to the 50 Americans held hostage in the U.S. Embassy in Teheran in their remarks during the 15-minute lighting ceremony — wax candles in a 36-inch sterling silver menorah presented to the President and electric “flames” in the 36-foot gold-painted stainless steel menorah. It was the first time that Chanukah candelabras were lighted in the area that has seen many of America’s most historic occasions.

“It also commemorates humankind’s commitment to be free,” the President said. “So tonight we pray that our closeness to God, our memory of this fine commitment of human beings down through the ages, will strengthen our desire to share our life and our love — not only with the 50 American hostages for whom we pray constantly — but for men and women throughout the world who don’t always have freedom and whose lives might be in danger.”

Thanking the American Friends of Lubavitch for presenting the National Menorah, Shemtov, who headed the project, said, “In this way we share the meaning of Chanukah with the world at large.” He said that “Chanukah reminds us that quality will be triumphant over quantity, commitment and dedication will prevail over numbers.”

Participants in the ceremonies, in the presence of about 200 spectators in sub-freezing weather, included President Carter’s domestic policy chief Stuart Eizenstat, his wife, Fran, and their sons Jay, 10, and Brian, six, Secretary of Commerce-designate Philip Klutznick; Leonard Goldfine, chairman of the Philadelphia Lubavitch Center; and opera tenor Jan Peerce who chanted “Mooz Tzur, Yeshuati” (Rock of Our Salvation).

After the President lit a wax eandle, Jay Eizenstat lit the shamus candle from it and the first of the four candles while offering the traditional blessings in Hebrew. Brian, his father, and Goldfine lit the other candles.

In addition to the silver menorah, Shemtov gave the President two booklets, one containing a copy of the Congressional resolution and the President’s proclamation honoring the Lubavitcher movement’s leader, Rabbi Menachem Schneerson on his 76th birthday which was proclaimed “Education Day. U.S.A.”, the other contained the texts of resolutions adopted by 25 states and the proclamations of their governors and the mayors of 30 cities.