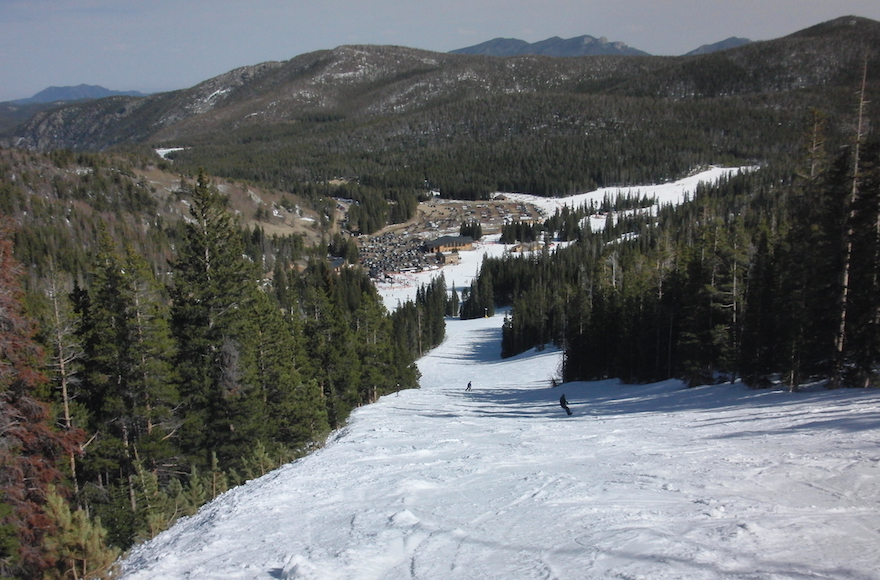 There are Jews hanging from mountaintops all over Colorado. Others are lighting Shabbat candles on sailboats or discovering their spirituality on the ski slopes.

These Jewish adventure enthusiasts not only make an effort to do the hobbies they love with other Jews, but they do so looking for religious or spiritual meaning.

By combining their dual interests, this growing cadre of adrenaline seekers is building a new definition of what it means to do, or be, Jewish.

When Korngold realized that the Reform Jews she was trying to reach in Boulder, Colo., were more interested in skiing than sitting in synagogue on Saturday mornings, she strapped on a pair of snow boots and headed up the mountain.

“For 30 percent of us, synagogue life is working really well, but the other 70 percent, we need new ways of reaching those people,” she explains.

“There are so many people whose religion is the outdoors, who really experience their spirituality outside of the synagogue,” continues Korngold, who has biked from New York to San Francisco and competed in a 100-mile trail run. “So what I do is say, ‘You’re going to be outdoors, you say it’s a spiritual experience. Let me show you how it’s Jewish.’ ”

Korngold’s “Adventure Rabbi” program challenges participants to discuss Torah passages, as well as Judaism’s relationship to nature, during Mountain Minyan hikes, backpacking treks through the desert and Rosh Hashanah retreats to a ranch in the Rockies.

Her trips are so popular that Korngold says her main problem is finding enough guides to meet demand.

Rabbi Howard Cohen, a Reconstructionist rabbi who runs the Vermont-based Burning Bush Adventures organization, also talks about the need to build bridges between Judaism and the outdoors.

“I know so many Jews who have essentially grown detached from the Jewish community because as they were growing up, they couldn’t get what they wanted from the Jewish world,” he says. “So they went outside of it.

Cohen calls the stereotype of the unfit, nonathletic Jew “residual anti-Semitism,” noting that Jews long have been involved in heart-pumping activities like boxing and farming.

He said Jewish camps have been relying on outdoor activity for years, and that the first Outward Bound school was started by a German Jew, Kurt Hahn, in 1941.

Cohen himself is proof of the Jewish athletic tradition. Before attending rabbinical school he spent 10 years working for Outward Bound, where he learned to dog sled, set up camp and navigate whitewater rapids.

Now he leads day-school students, among others, on such expeditions. Before going, participants are sent Torah portions, as well as a list of questions, quotes and readings.

Cohen instigates discussion on these materials out in the woods, and has students keep Shabbat and bake challah in the field.

Being with students in this context changes his ability to relate to them, Cohen says.

“There are a lot of rabbis who ski or play golf and put their kipah in their back pocket,” Cohen says. “But rabbis who take their congregants skiing, they have a different bond.”

Cohen admits that rabbis who follow this path may not serve Jewish community “needs,” such as Shabbat services and bar mitzvah training, but he says they do provide some of the “wants” Jews have from their religion.

“People want to be engaged Jewishly in different ways,” he says. “We’re adding quality to the experience.”

Rabbi Nachum Shifren, an Orthodox surfer who rides waves in a wetsuit and full beard, said the surfing lessons he offers in Israel and southern California offer catharsis.

“It’s definitely a therapeutic thing,” Shifren says. “Once you’re hooked on all that power and might of the ocean, you’re just never going to be the same.”

Shifren is working on a new program to wean inner city kids off drugs and gang life through surfing. Cohen also is developing a program for troubled youth.

“We tend to think of religion as a place where you have to toe the line… but there’s room for rebellion in religion,” he said, citing “iconoclastic rabble-rousers” in the Torah such as Abraham.

Korngold said her therapeutic outreach pulls in other types of out-of-the-box Jews.

“We’ve taken angry and/or unengaged Jews and turned them into Jews with a positive Jewish identity,” she says.

The Chicago-based Steppin’ Out Adventures uses this community-building effect as a vehicle for matchmaking, allowing Jewish singles to schmooze while biking in Ireland or climbing the Inca Trail in Peru.

Robin Richman, director and one of the co-founders of the organization, described the bonding that takes place as “amazing.”

“When you’re on an adventure you plan as best you can, but things happen,” she said. “Those are the things that become jokes between you.”

She cited a weekend getaway to Wisconsin where, due to three straight days of rain, the group wound up eating lunch in their underwear.

“It definitely brought the trip close together very quickly,” she laughed.

Since it began in 1993, Steppin’ Out Adventures has led to 60 marriages, 34 babies and “a whole lot of friendships and business partners,” according to the group’s Web site.

For the 20 members of the Chesapeake Bay’s Sailing Chavurah, the marriage of the outdoors and Jewish life also has proved transformative.

“At first we all thought we were the only one” who sailed and was Jewish, says Julien Hofberg, the group’s commodore. But over time, boats named Tikkun Olam and Miss Shue Goss found each other, as did a Holocaust survivor, an accomplished Orthodox racer and a half-dozen Reform and Conservative Jews from the region.

“Now we hold Havdalah services every Saturday, we have a Chanukah party,” Hofberg says. “We share our expertise… and watch out for each other.”