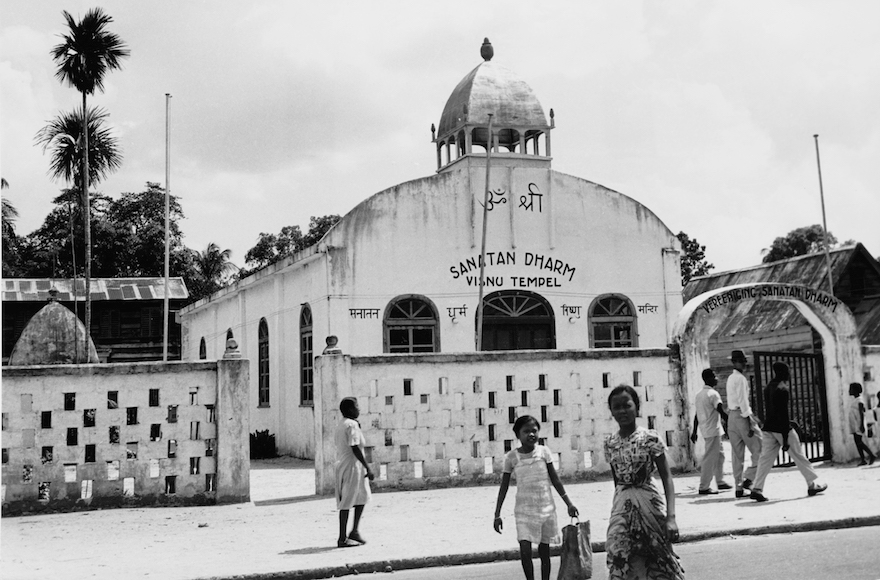 The words 'Sanatan Dharm' are written on the front of a Hindu temple to Vishnu at Paramaribo, the capital of Surinam in South America, circa 1955. (Photo by Three Lions/Hulton Archive/Getty Images)
See Original Daily Bulletin From This Date
Advertisement

Official confirmation that the Parliament of Surinam, in Dutch Guiana, and the Netherlands Government have both approved the proposal of the Freeland League to settle 30,000 homeless European Jews in Surinam, was received by the League last week, it was announced at a press conference here today.

Dr. I.N. Steinberg, secretary-general of the League, said that his organization will send a commission of experts to Surinam to select a suitable area for settlement and to draft detailed economic, technical and financial plans. The project provides for settling Jewish immigrants in an undeveloped area of Surinam on a community basis.

In announcing the acceptance of the plan by the appropriate authorities, Dr. Steinberg said that negotiations began in The Hague in 1946 and were transferred to Paramaribo, capital of Surinam. A delegation of the Freeland League visited Paramaribo in April 1947 and reached a preliminary agreement with the Government Advisory Commission of Surinam on the main principles of the proposed colonization.

“This preliminary agreement, as well as the figure of 30,000 immigrants, were submitted to the Legislative Council of Surinam,” Dr. Steinberg declared. “On June 27, 1947, they voted to accept the plan. On July 3, 1947, Dr. J.A.Jonkman, Minister for Overseas Territories, announced in the Netherlands Parliament in The Hague, approval of the project. On July 21, the Freeland League was officially notified by Dr. J.C.Brons, Governor of Surinam, that the Staten and Netherlands Government agreed to the immigration of 30,000.”