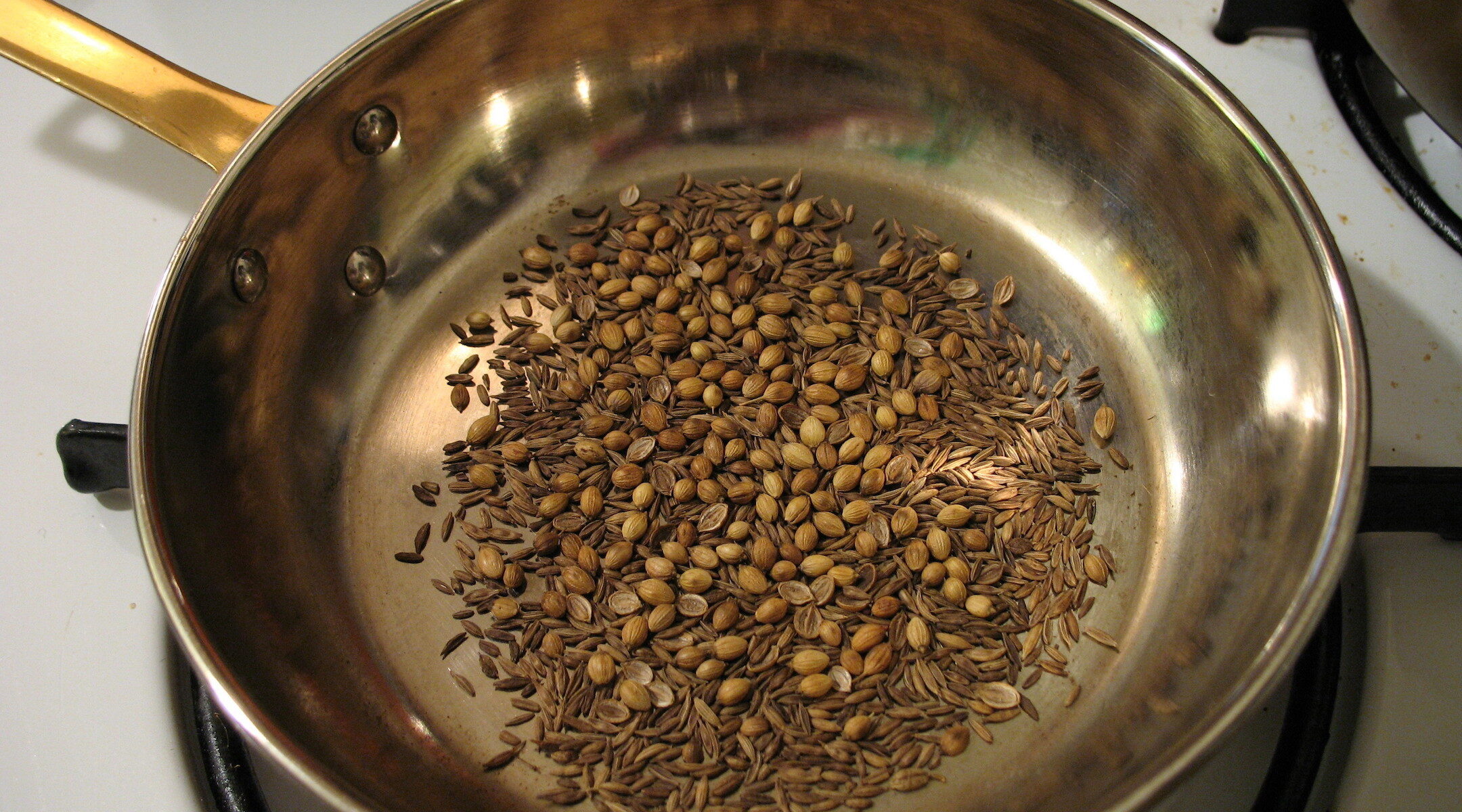 Ruby red pomegranates beckon; their jellied seeds symbolize your good deeds in the coming year. A bowl of crunchy sesame seeds promises that your virtues will be as numerous as sesames seeds themselves. You partake in pumpkins and squash for protection; you nibble on olives and fava beans too. To keep enemies away, you sample spinach and beet greens. You taste tantalizing dishes seasoned with garlic and leeks, believed to cancel your bad deeds. And to guarantee a sweet year, you delight in figs, quince, dates — and apples soaked in honey.

Pinch yourself. You are not dreaming. This fantasy could become a reality. With a little know-how and a lot of spices, you could dine this Rosh Hashanah on traditional Tunisian cuisine.

“I am crazy about Southern Mediterranean Jewish food,” says Joyce Goldstein, chef, author, teacher, and Mediterranean cooking expert. “I love dishes that combine spices, fruits, and nuts . . . with meat, fish, poultry, and vegetables, and that play with heat and lemon, sweet and sour, and sweet and hot. This is the food I cook quite often at home and served constantly when I owned Square One, my restaurant in San Francisco.”

Tunisia is a small country wedged between Algeria and Libya. While Jews have come and gone in waves over the centuries, it is believed that Jewish life there dates back to the Roman Empire. Except for a few notable outbreaks of hostility in this Muslim country, Jews have lived under relatively tolerant conditions as merchants, interpreters, diplomats, and government officials. Today many are jewelers, butchers and carpenters; some run boutiques and restaurants.

However, since 1948 when 100,000 Jews lived in Tunisia, the Jewish population has dropped to 2,000. Many Jews emigrated to Israel after the founding of the Jewish state — or to France when Tunisia won independence in 1956. More Jews left following anti-Jewish riots during the 1967 Six-Day War. Although few in number, Jews tenaciously thrive, retaining a lively but observant community, complete with Jewish schools, synagogues and kosher food. Countering a downward trend, in the past several years their population has edged up by 200.

Hara Seghira is home to the Ghriba Synagogue, the oldest in continuous existence in the world. This synagogue, with its Arabic-style entrance shaped like a keyhole, made headlines in April when a gas truck explosion damaged the building and killed at least 16 people, including 11 German tourists. Al-Qaida later claimed responsibility for the bombing.

This was not the first time Tunisian Jews faced trouble. During the 16th century, pirates took Jewish hostages. To arrange their release, a small group of marrano Jews — Jews who hid their religion to escape the Spanish Inquisition — traveled from Livorno, Italy. Many of them stayed and others followed from Livorno. Their descendants are easy to recognize because they speak Italian, avoid intermarriage with native Jews, and educate their children in Italy. They keep their own traditions and cuisine, a mixture of Italian, Tunisian and Portuguese.

Indeed, many Jews from Spain, and later Portugal, settled in Tunisia to escape the Spanish Inquisition. It didn’t take long for them to both adopt and influence local cooking.

“While not purely Sephardic, as much of this cuisine existed before the arrival of Jews from the Iberian peninsula in 1492, the taste interplay between North Africa and the Iberian Peninsula is evident in many a bite,” says Goldstein, explaining that established Portuguese and Spanish Jewish communities were already in Tunisia from earlier migrations before the expulsion from Spain.

She claims that local ingredients and the use of specific spices create signature flavor profiles in each part of the Mediterranean world. But North African Jews play with the fullest spice spectrum, infusing foods with garlic, ginger, cumin, cayenne, coriander, hot pepper and caraway. And tweaking tastebuds further, they also sprinkle mint, cinnamon, and dried rose petals into recipes, along with complex homemade spice mixtures.

Goldstein used cookbooks as source material for her research and experimented with recipes that excited her. The cookbooks she studied were written by women who probably possessed the talent of world-class chefs, except their world centered in the home.

Women customarily worked in teams in the kitchen: grandmothers, aunts, and cousins; mothers and daughters; mothers-in-law and daughters-in-law; and neighbors too. Marketing and cooking filled their days, especially before holidays. Although food was prepared by hand, the old-fashioned way, there was joy in the team effort and satisfaction from nimble hands gathered around a table.

Women chatted and gossiped as the elder generation of experienced cooks passed on their skills to brides who watched how to stuff vegetables, grind nuts and spices and trim fruit. Today in America, the land of microwave ovens, low-fat frozen entrees, and fast food, this lifestyle is hard to fathom. Although American women are busy, Goldstein highly recommends team cooking because it’s more fun than you can imagine. She discovered this while teaching cooking classes in the San Francisco Bay area. Teamwork or not, her recipes are easy for one person to master.

“Students love the food and can’t get enough of it,” she says, touting Tunisian Rosh Hashanah dishes. She raves about the scent of cumin and cilantro wafting from a whole grilled fish. Its head represents Rosh, the head of the year. While chicken soup with eggs is a must on Erev Yom Kippur, it is also popular at New Year’s meals like Ashkenazi-style chicken soup. The bean and beef stew is often served with home-made semolina bread, the equivalent of challah. The sweet and sour nuance of the squash and apricot puree is enhanced by couscous.

When you cook this beautiful food and share its sensual and vibrant seasoning, you’ll know why this cuisine tastes better than practically anything else, Goldstein explains. “It’s infused with a wide range of flavors and the most spicy surprises.” Surprises as layered as Jewish life in Tunisia surviving over 2,500 years.

1. Preheat oven to 450 degrees. Rub fish with 2 tsp. of salt inside and out, then rinse. Cut diagonal slits in both sides of fish, so marinade can penetrate.

2. In a small bowl, combine the lemon juice, spices, garlic, pepper and the remaining 1 tsp. salt. Whisk in olive oil. Rub this paste into fish, and if baking, wrap in aluminum foil and bake until opaque throughout, 25 to 30 minutes. Unwrap and serve sprinkled with coriander. If broiling or grilling, there is no need for foil. Yield: 6 servings.

1. Remove excess fat from chicken pieces, then rinse. Rub each piece with lemon halves and sprinkle with salt. Cover and refrigerate overnight.

2. Put chicken in a large stockpot and add cold water to cover. Bring to a boil. Reduce heat to a simmer and skim the scum from broth. Simmer gently for 30 minutes. Add the vegetables, saffron and bouquet garni. Cook for about 2 hours longer. Using a skimmer, remove the solids and discard.

3. Pour the broth through a sieve lined with wet cheesecloth into a large bowl. Chill the stock, uncovered, in an ice bath in the sink until cold. Spoon off fat. Pour the broth into a pot, bring to a boil, and cook at a low boil, skimming if needed, until reduced and flavorful. Add pepper and cinnamon.

4. Beat the eggs with the lemon juice and stir into the soup. Simmer for 8 to 10 minutes. Garnish the soup with the mint. Yield: 6 servings

1. Soak the apricots in hot water for 1 hour to soften. Drain apricots.

3. Add the onions, reduce heat and cook, stirring occasionally, until tender, about 10 minutes.

4. Add the squash and water and cook until the squash is tender, about 20 minutes. Add apricots, lemon juice and cinnamon, and cook until you have a slightly chunky puree. Test for salt. Serve warm or at room temperature as an accompaniment to couscous. Yield: 3 cups.

1. Rinse spinach and cilantro well. In a large covered pot, cook spinach and coriander over medium heat until wilted, about 3 to 5 minutes. Drain well and return to pot. Cook over low heat turning with a wooden spoon, until dry and browned, 20 to 30 minutes.

2. Add beans, veal bones, beef, garlic, onion, cinnamon, harissa, dill, mint and water. Bring to a boil, reduce heat to a simmer, cover, and cook until the liquid is absorbed and the oil comes to the top of the dish, about 3 hours. Add more water if the dish becomes too dry while cooking. Yield: 6 servings.

In a food processor or blender, grind or puree the peppers. Strain, pressing on the solids with the back of a large spoon. You should have about 3/4 cup puree. Stir in garlic, spices and salt. Add oil for spoonability. Yield: about 1 cup.