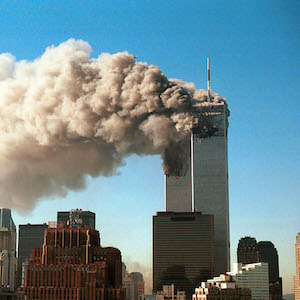 For Fred Gompertz, the devastating Sept. 11 attacks on the World Trade Center — just yards away from his apartment building — brought back memories of hiding upstairs on Nov. 9, 1938, while Nazi thugs destroyed his father’s clothing store on Kristallnacht.

That may explain why, as most people were evacuating their buildings and trying to escape the disaster area, the 77- year-old retired fashion designer froze instead, sitting alone in his dark apartment for two days until his son was able to rescue him.

Gompertz’s proximity to the World Trade Center attacks was unusual. There appear to be no other known cases of survivors of Nazi persecution who were directly caught up in the Sept. 11 events.

Yet even for other Holocaust survivors, the shock and trauma of the massive terror attacks in the United States — a place they viewed as uniquely safe — are reawakening long-dormant childhood memories and emotions.

“It brings back their vulnerability,” Fogelman said. “It brings back the fact that there is no secure place on this planet, so it creates a lot of anxiety and tremendous fears that make it difficult to have restful sleep.”

With the massive death toll in which bodies cannot be located and the acrid smoke permeating the air for days, the Sept. 11 attacks have special resonance for Holocaust survivors. Fogelman calls it “deja vu of the world they’d thought they’d left behind.”

Herself the child of survivors, Fogelman is an advisor for The Hidden Child Foundation, a 6,000-member group of Jews who escaped the concentration camps by hiding from the Nazis.

Fogelman and the foundation recently distributed a letter to members, noting that “our underlying physical, mental and emotional tolerances for stress may be different from those who did not have early traumatic histories” and that the recent events “probably have caused us to feel powerless, shocked and numb.”

Other likely feelings, according to the letter, are “rage, depression and overwhelming anxiety.”

Fogelman advises survivors to avoid watching television for too long at one stretch and to try to rest, eat and drink regularly.

Not all survivors are reporting special problems, and several Jewish agencies say they’ve been surprised by the level of resilience among this population.

“This is a very independent and very brave group who don’t ask for help easily,” said Karen Wies, a spokeswoman for Selfhelp Community Services, Inc., which provides home care, housing and community-based social services to over 2,000 survivors of Nazi persecution.

Elihu Kover, Selfhelp’s vice president for social services, said his group is hearing contradictory things from clients. Some are feeling anxious and afraid to leave their homes. Others seem relatively unaffected or say the Sept. 11 attacks — which occurred during just one terrible day — are not as bad as the Holocaust, a persecution that continued over a period of years.

Survivors are experiencing the same “range of emotions as in the general public, but with this one really big piece — firsthand experience of trauma directed against them as Jews, as a target population,” Kover said.

David Stern, of New York’s Jewish Association for Services for the Aged, said, “at this point, very few Holocaust survivors are openly expressing fears or concerns,” although there have been a few cases of people “whose memories of the past have been reawakened by the events.

“I think we’ll begin to see among Holocaust survivors some reawakened fears, but we’re not seeing it yet,” he said, noting that the Jewish holidays — and the family gatherings that come with it — may be postponing the trauma.

Ann Shore heard her father being shot by the Nazis in 1942, and she survived the Holocaust with her mother and sister by hiding for three years in a hayloft and scavenging for food at night.

Shore, who is the president of the Hidden Child Foundation, said survivors are reacting differently to the Sept. 11 attacks.

“Our great concern is not as much for ourselves any longer but for our children and grandchildren. It reminds us of the disaster that was, and it’s pretty frightening,” she said. “I’m in a feeling of weeping and crying. It brought up all this pain that had festered.”

However, Selfhelp’s Kover suggested that survivors may also be able to help the rest of Americans as they struggle to get on with their lives after Sept. 11.

An acquaintance recently told Kover that she had told her mother, a Holocaust survivor, that she did not know how to comfort members of her synagogue who had lost family and friends in the attacks.

The mother reportedly urged her to “get everyone together and build a sukkah.”

“Just the act of building will help you,” the mother said. “That’s what we did. We came here and we rebuilt. You find ways to heal yourself.”