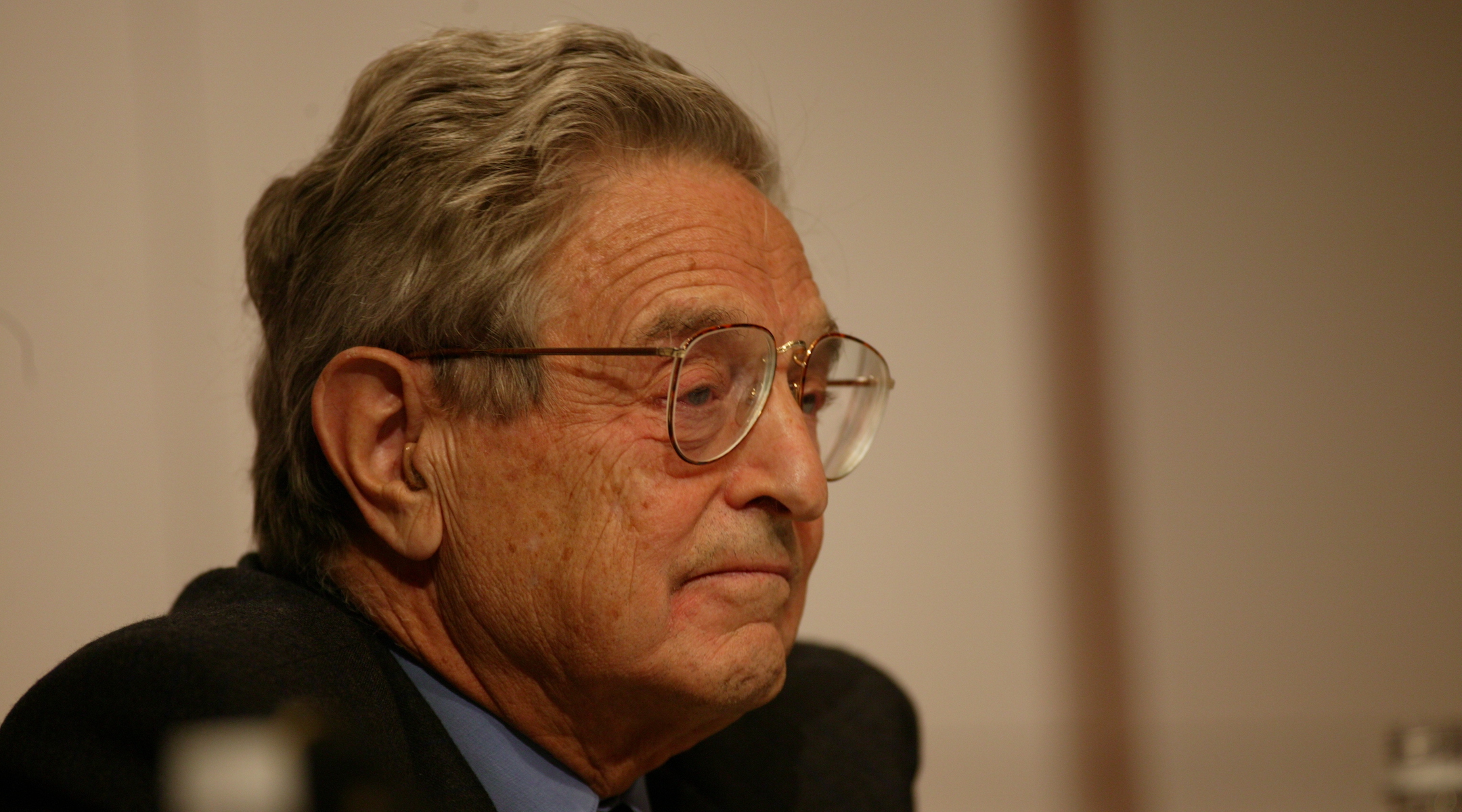 It’s not often that George Soros, the billionaire financier and philanthropist, makes an appearance before a Jewish audience.

It’s even rarer for him to use such an occasion to talk about Israel, Jews and his own role in effecting political change.

So when Soros stepped to the podium Nov. 5 to address those issues at a conference of the Jewish Funders Network, audience members were listening carefully.

Many were surprised by what they heard.

When asked about anti-Semitism in Europe, Soros, who is Jewish, said European anti-Semitism is the result of the policies of Israel and the United States.

“There is a resurgence of anti-Semitism in Europe. The policies of the Bush administration and the Sharon administration contribute to that,” Soros said. “It’s not specifically anti-Semitism, but it does manifest itself in anti- Semitism as well. I’m critical of those policies.”

“If we change that direction, then anti-Semitism also will diminish,” he said. “I can’t see how one could confront it directly.”

That is a point made by Israel’s most vociferous critics, whom some Jewish activists charge with using anti-Zionism as a guise for anti-Semitism.

The billionaire financier said he, too, bears some responsibility for the new anti-Semitism, citing last month’s speech by Malaysia’s outgoing prime minister, Mahathir Mohammad, who said, “Jews rule the world by proxy.”

“I’m also very concerned about my own role because the new anti-Semitism holds that the Jews rule the world,” said Soros, whose projects and funding have influenced governments and promoted various political causes around the world.

“As an unintended consequence of my actions,” he said, “I also contribute to that image.”

In the past, Mahathir has singled out Soros and other “Jewish financiers” for financial pressure that Mahathir said has harmed Malaysia’s economy.

After the conference, some Jewish leaders who heard about the speech reacted angrily to Soros’ remarks.

“Let’s understand things clearly: Anti-Semitism is not caused by Jews; it’s caused by anti-Semites,” said Elan Steinberg, senior adviser at the World Jewish Congress. “One can certainly be critical of Bush policy or Sharon policy, but any deviation from the understanding of the real cause of anti-Semitism is not merely a disservice, but a historic lie.”

“He buys into the stereotype,” Foxman said. “It’s a simplistic, counterproductive, biased and bigoted perception of what’s out there. It’s blaming the victim for all of Israel’s and the Jewish people’s ills.”

Furthermore, Foxman said, “If he sees that his position of being who he is may contribute to the perception of anti-Semitism, what’s his solution to himself — that he give up his money? That he close his mouth?”

Associates said Soros’ appearance Nov. 5 was the first they could ever recall in which the billionaire, a Hungarian- born U.S. Jew who escaped the Holocaust by fleeing to London as a child, had spoken in front of a Jewish group or attended a Jewish function.

The one-day meeting on funding in Israel, which took place at the Harvard Club in New York, was limited mostly to representatives of Jewish philanthropic foundations.

After Soros’ speech, Michael Steinhardt, the real-estate magnate and Jewish philanthropist who arranged for Soros to address the group, said in an interview that Soros’ views do not reflect those of most Jewish millionaires or philanthropists.

He also pointed out that this was Soros’ first speech to a Jewish audience.

Steinhardt approached the lectern and interrupted Soros immediately after his remarks on anti-Semitism.

“George Soros does not think Jews should be hated any more than they deserve to be,” Steinhardt said by way of clarification, eliciting chuckles from the audience.

Steinhardt then gave the lectern back to Soros, who said he had something to add to his remarks on the issue of anti- Semitism. Soros then paused to ask if there were any journalists in the room.

When he learned that there were, Soros withheld further comment.

Mark Charendoff, president of the group that hosted the conference, said he was pleased overall with the Soros event.

“We found him to be enormously frank, candid and generous with his time,” Charendoff said. “I would be delighted if Mr. Soros would bring his passion, his brilliance and his resources to a range of different causes that are important to the Jewish community.”

Regardless of what they think of his politics, most Jewish activists likely would welcome Soros’ participation in the world of Jewish philanthropy.

Though he’s ranked as the 28th richest person in the United States by Forbes magazine — with a fortune valued at $7 billion — Soros has given relatively little money to Jewish causes.

Soros’ first known funding of a Jewish group came in 1997, when his Open Society Institute’s Emma Lazarus Fund gave $1.3 million to the Council of Jewish Federations, and when Soros gave another $1.3 million to the Jewish Fund for Justice, an anti-poverty group.

As much as Jews may not like what Soros has to say — at the Nov. 5 meeting, he called for “regime change” in the United States and talked of funding projects in “Palestine” — they are eager to get Soros involved in giving to Jewish causes.

“In many ways, this was an introduction for Soros,” Charendoff said. “He remarked to me how impressed he was with the quality of the people he met. We can only hope that this was a beginning of an engagement with the Jewish funding world.”

Soros said he has not given much to Jewish or Israel-related causes because Jews take care of their own, so that his financial clout is better directed elsewhere.

Steinhardt tried to correct him on that point, saying the field of Jewish giving is not as crowded as Soros thinks.

“Even if we were a crowded field,” Steinhardt told Soros, “I’m sure we could make room for you.”

During his speech, Soros announced that he would support the “Geneva accord,” an unofficial Middle East peace plan proposed by two out-of-office politicians, Israel’s Yossi Beilin and Palestinian Yasser Abed Rabbo.

That plan envisions two states along pre-1967 borders and a shared Jerusalem, and is vague on the demand that Palestinian refugees from 1948 be allowed to return to Israel.

It was not clear whether Soros’ support of the plan would involve funding. Beilin’s office did not return a call seeking comment.