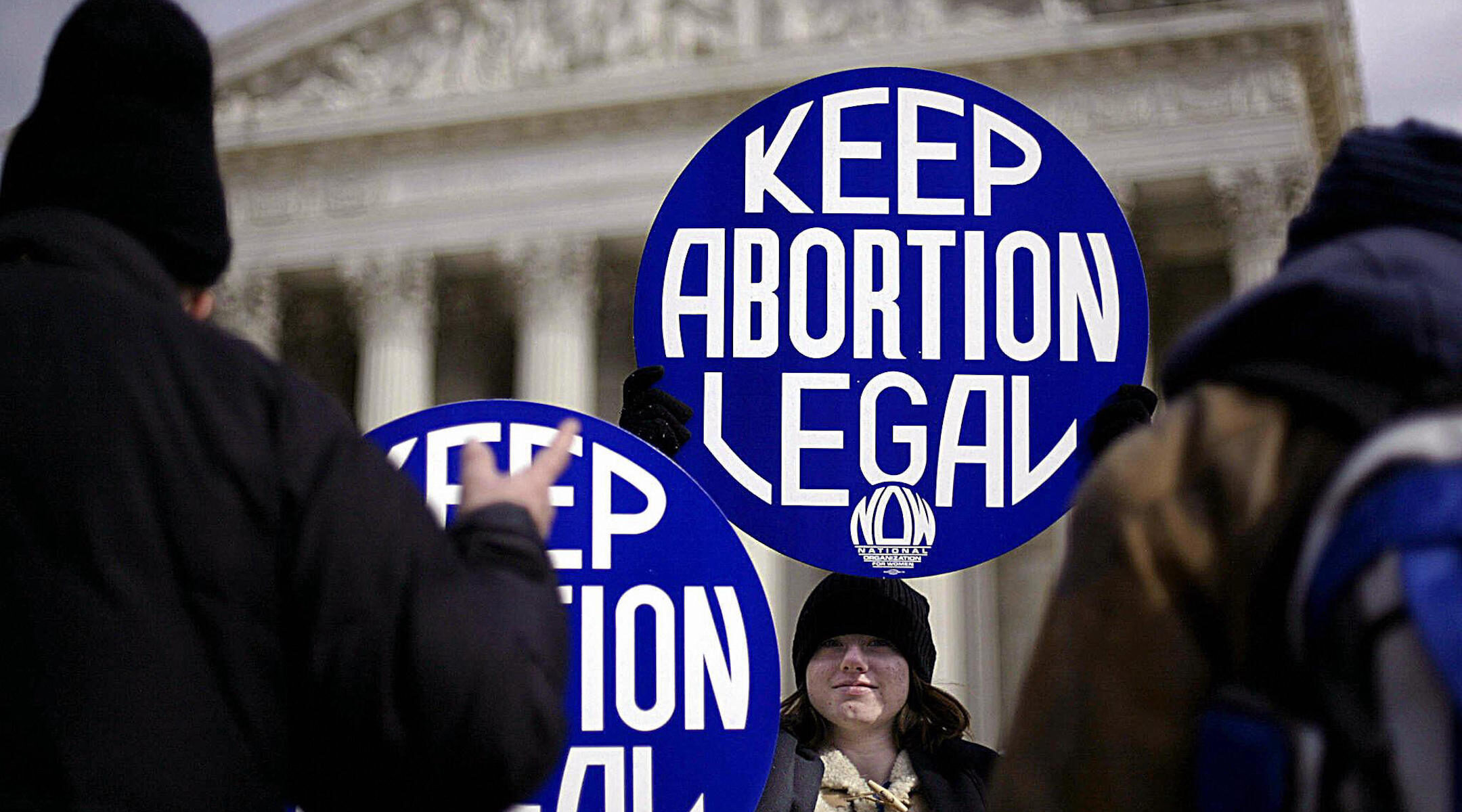 A view of counterprotesters at a March for Life demonstration in front of the Supreme Court, Jan. 22, 2004. (Tim Sloan/AFP via Getty Images)
See Original Daily Bulletin From This Date
Advertisement

Barbara Goldman came halfway across the country for this week’s reproductive rights rally — and she says it was worth it.

“You have to stand up and be counted,” said Goldman, who came to Washington for Sunday’s March for Women’s Rights from Chicago with her congregation.

Goldman spoke at a Saturday night Havdalah service that the Women of Reform Judaism held on the eve of the abortion-rights rally, with the Jefferson Memorial bathed in candlelight.

Thousands of Jewish women joined hundreds of thousands of American women — and a smattering of men — rallying for abortion rights at the National Mall.

“As Jews, we know what it means to have fundamental rights and liberties stripped away,” Marsha Atkind, president of the National Council of Jewish Women, told the overflow crowd. “And today, one of our most basic rights, our right to reproductive freedom, is under attack in courtrooms and legislatures across the country.”

Much has been made of Jewish support for the Bush administration’s stance on Israel, the fight against terrorism and, in many cases, the war in Iraq. But for many American Jews, those positions do not counterbalance what they see as the administration’s chipping away at civil liberties.

“We’ve seen an erosion of civil rights and human rights in this country by an administration that is secretive and is afraid to hear dissent,” said Sharlene Dane, who flew to Washington from Los Angeles for the rally.

Her sister, Sharon Hollander of St. Louis, said she remembered a time before abortion was legal, and she was determined to protect the right to abortion for her daughters.

“We don’t want the rights to disappear and they’re in danger,” she said. “The government is now in the hands of people that would abolish rights we fought to maintain.”

The Conservative and Reconstructionist movements were represented as well.

“It’s so important that we do this under Jewish auspices,” said Roni Berkowitz, president of the Chesapeake Jewish Reconstructionist Federation, which represents the Washington area. “It’s not just a matter of choice. The Talmud teaches us there are times that it is incumbent on women to have an abortion,” she said, referring to instances where abortion is allowed if the mother’s life is in jeopardy.

Many of the groups assembled spoke out against last year’s passage of the Partial Birth Abortion Ban, which outlawed a specific abortion procedure technically known as intact dilation and evacuation, which generally is carried out late in a pregnancy.

Orthodox Jews generally differ from the other streams when it comes to abortion, and Orthodox Jewish representatives in Washington have expressed support for both acts.

But polls have shown that more Jews support abortion rights and Roe v. Wade than any other religious or ethnic community in the United States, according to the Union for Reform Judaism.

“We’re being shouted out by the religious right,” said Sandi Costello, who joined a Hadassah delegation from Albany, N.Y. “It’s important for people to know that people who have a firm foundation in religion and ethics value choice.”

That contingent seemed very skeptical of Bush’s overtures to Jews.

“The president is making decisions that are overtly political, motivated to go for the Jewish vote,” said Jane Marcus, who came from Los Altos Hills, Calif., with members of her synagogue’s sisterhood. “I hope Jews look at all of the president’s policies before they vote.”

June Walker, Hadassah’s national president, said it is important for the Jewish community to be involved in issues beyond Israel.

“We cannot be one-issue people,” she said. “We must be part of the society we live in.”

Meredith Pensak, 22, said she was optimistic that young American Jews would carry the mantle for these types of domestic crusades. The Wesleyan University student came to the rally with her mother.

“We’re aware that it’s not just us, we have to fight for everybody,” Pensak said.