Meat May Be Murder, but It’s Not a Holocaust, Jewish Groups Fume 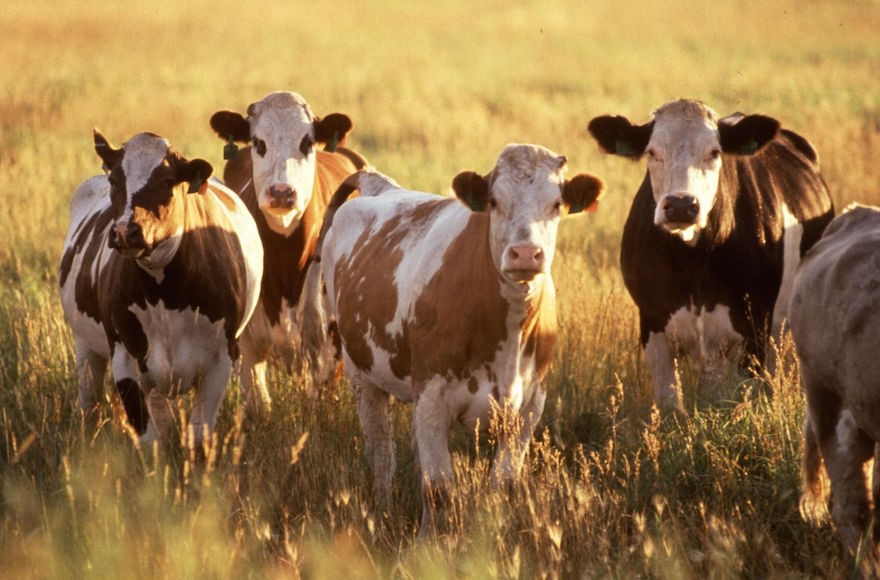 “During the seven years between 1938 and 1945, 12 million people perished in the Holocaust,” the image declares. “The same number of animals is killed every 4 hours for food in the U.S. alone.”

The poster forms the heart of a new national campaign launched last week by People for the Ethical Treatment of Animals that compares the Holocaust and the meat industry — and that is ruffling Jewish feathers.

Dubbed “Holocaust on Your Plate,” PETA’s campaign and its companion Web site, masskilling.com, insists the Nazi murder of Jews, gays and gypsies mirrors “the modern-day Holocaust” that is the industrialized slaughter of animals for food.

One of the campaign’s creators, Prescott, 21, said that as a Jew whose relatives died in the Holocaust he finds the analogy neither “off the wall” nor “radical,” but entirely apt.

Many of his mother’s cousins, aunts and uncles are believed to have been killed in Buchenwald and Dachau, Prescott said, adding that his mother’s sense of social justice led him to become a vegetarian, and then vegan.

Singer was a staunch vegetarian whose fictional characters drew analogies between Nazism and man’s treatment of animals in books such as “Enemies, A Love Story.”

In “The Letter Writer” from “The Seance and Other Stories,” Singer’s character Herman delivers a eulogy for a mouse, in which he says that “in relation to” animals, “all people are Nazis: For the animals it is an eternal Treblinka.”

That phrase, “Eternal Treblinka,” became the title of a book on the subject by Holocaust educator Charles Patterson, whose Web site links to the PETA campaign.

PETA’s tactics are raising the hackles of several Jewish groups and splitting the Jewish animal-rights community.

“No responsible Jewish leader will have anything against a campaign that seeks to limit the abuse and torture of animals,” Hier said. “But putting on a Web site the images of the death camps, and comparing it to chickens cooped up in a pen, it denigrates the memory of the Holocaust.”

“Rather than deepen our revulsion against what the Nazis did to the Jews, the project will undermine the struggle to understand the Holocaust and to find ways to make sure such catastrophes never happen again,” he said.

Ironically, the PETA project first came to the ADL’s attention when the animal-rights activists sought ADL approval for their effort.

“It’s chutzpah enough to compare” the Holocaust and the meat industry, Foxman said, “but to go to the Jewish community is double chutzpah!”

Prescott admitted that ADL’s response “wasn’t what we were expecting,” though he added that PETA still would seek support from other Jewish groups.

PETA’s campaign, meanwhile, has become a meaty issue in the Jewish vegetarian community.

Roberta Kalechofsky, who founded Jews for Animal Rights and has written several books on Jewish vegetarianism, criticized PETA’s use of the Holocaust.

The Holocaust “is the end result of a very complicated, theological, historical, evolutionary process that went on for 1,700 years,” she said, but PETA’s use of the period “is really sucking away all that history.”

By drawing the parallel, PETA “reduces the meaning of the Holocaust to physical pain,” she added.

Kalechofsky wrote a paper on animal rights and the Holocaust in which she drew a distinction between the motivations of hunters and Nazis.

Prescott replied: “So if people had eaten the flesh of Jews killed in the Holocaust, would that have made it acceptable?”

Richard Schwartz, author of “Judaism and Vegetarianism,” long has opposed the use of Holocaust imagery in animal-rights causes, but hoped that PETA’s dramatic tactics would focus attention on animal rights.

If PETA’s comparison of death camps to factory farms rouses people from their “indifference” to the environmental impact of the meat industry, he said, “why not look at the questions it raises?”

Schwartz said a routine supermarket trip evoked for him “the banality of evil” in which people buy meat “without considering what’s behind it.”

If Americans reduced their beef consumption by just 10 percent, he claimed, it would free up enough grain now used to feed livestock to feed the 20 million people every year who die of starvation.

Despite his initial hopes for the campaign, Schwartz changed his mind after sensing the “rage” from some Jewish groups and even colleagues. One Web site, MyJewishLearning.com, gave the debate prominent play.

Schwartz went so far as to urge PETA to issue a “clear and unambiguous” apology for the “deep pain” its Holocaust campaign has caused.

He also wants PETA to meet with Jewish groups, who he hopes will add animal rights and vegetarianism to their own agendas.

But PETA remains adamant that the “similarities” between the Holocaust and factory farming are worth exploring, Prescott said.

“We’re trying to widen the circle of compassion, and sometimes a person has to be shocked before they can begin to accept their own role in an act of injustice,” he said.