Negro Marchers from Selma Wear ‘Yarmulkes’ in Deference to Rabbis 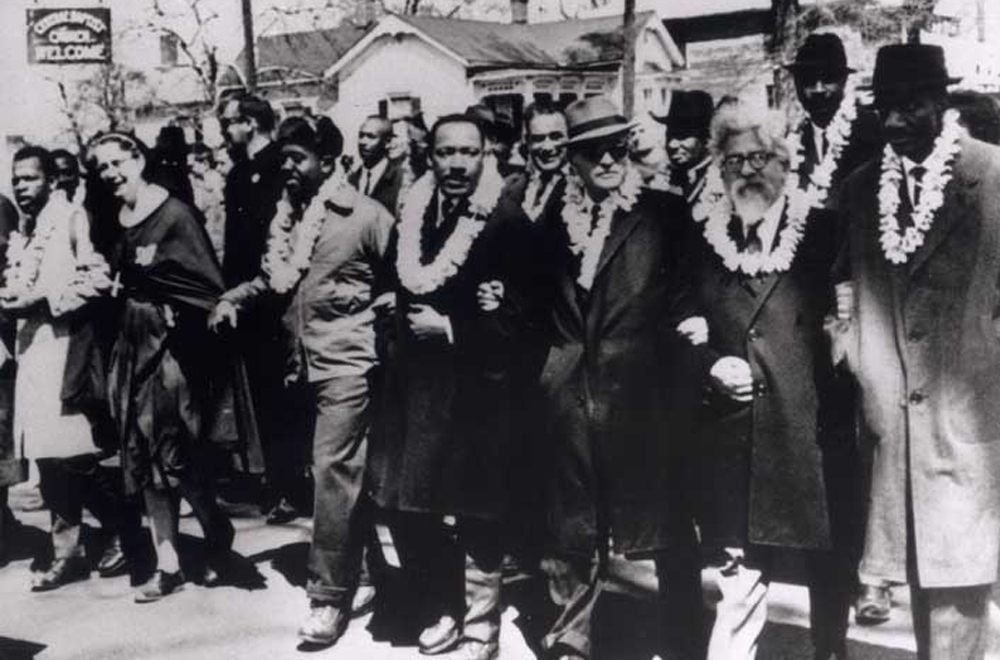 The Alabama Negroes called the yarmulkes “freedom caps.” The demand for yarmulkes was so great that an order has been wired for delivery of 1,000 when the marchers arrive in Montgomery later this week for a great demonstration at the state capitol.

Dr. Abraham Heschel, of the Jewish Theological Seminary, was asked by the Rev. Martin Luther King to take a position of honor at the head of the marchers. He walked with Dr. Ralph Bunche, Under secretary of the United Nations, and the 82-year-old grandfather of a Negro youth slain recently by Alabam police. The rabbi completed the day’s march despite the distance.

RABBIS PARTICIPATE IN MARCH; FIVE WERE HELD IN SELMA JAIL

Rabbis jailed by Selma police during the weekend for participating in demonstrations conducted Friday evening services in the Selmar Jail, it was learned. Five rabbis recited Hebrow prayers behind prison bars. They have since been released on bond. An estimated 10 to 12 rabbis took part in the march which began yesterday.

Brant Coopersmith, Washington, D.C., director of the American Jewish Committee, was in Selma with instructions from his organization to assist the demonstrators in any way possible. An expert in community relations and human rights projects, Mr. Coopersmith is helping to facilitate the aims of the demonstration. Benjamin R. Epstein, national director of the Anti-Defamation League of B’nai B’rith, led a contingent of ADL officials in the march.

From various cities, Jewish community leaders came to Selma, among them Mr. and Mrs. Don G. Lebby, representing the Jewish Community Federation of Cleveland, Ohio. A considerable number of the white youths who came to Alabama to join the march, affiliated with such groups as the Students Non-Violent Coordinating Committee and the Congress of Racial Equality, were of Jewish faith.

(Rabbi Maurice N. Eisendrath, president of the Union of American Hebrew Congregations, said in New York today that he will join other Reform rabbis and laymen from all parts of the country participating in the march from Selma to Montgomery. At the same time he called upon the 660 member synagogues of the UAHC to “launch a vigorous educational program to rally public sentiment for the strongest and most effective voting registration bill.”)