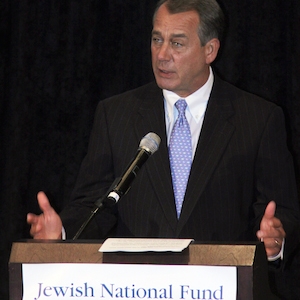 It was an interest in education that brought U.S. Rep. John Boehner (R-Ohio) into the sukkah of a Cincinnati family several years ago. Boehner, elected last week as the majority leader in the U.S. House of Representatives, came to the outdoor tent to listen to Jewish parents with children in day school. There, he expressed his support for a priority issue in the religious community — resources for special education students in private schools.

“He was very interested,” said Joyce Garver Keller, executive director of Ohio Jewish Communities, who attended the meeting. “I think his openness to listening is very important.”

Boehner’s ascension to the House majority leadership could have an important impact — both negative and positive, depending on whom you ask — on the organized Jewish community’s priorities.

Boehner replaces Tom DeLay (R-Texas),who resigned from the second-ranking House job last month. He is under indictment for alleged campaign finance abuses in Texas and is reportedly under investigation in Washington for his ties to disgraced lobbyist Jack Abramoff.

On one hand, Boehner already appears to be in sync with the Jewish community on an issue of growing importance across the religious and political spectrum — lobbying reform.

But his fiscal conservatism is likely to encounter opposition from some Jewish groups involved in social welfare programs, which rely on spending programs for funding.

Elected to the House in 1991, Boehner has focused most of his efforts on domestic issues. As chairman of the House Committee on Education and the Workforce, he has been an advocate for school vouchers, a program that allows federal dollars to go to private and parochial schools.

Numerous Jewish groups oppose the program as a violation of the separation of church and state, also known as school choice. But it is touted by the Orthodox community.

“He’s very smart on policy and on politics,” said Nathan Diament, director of the Orthodox Union’s Institute for Public Affairs. “He’s not a member of Congress who, if the staff didn’t put talking points in front of him, wouldn’t know what he was talking about.”

Boehner is also well known to Ohio Jews from his tenure as a state representative. But that does not mean he has been a strong supporter of increased funding to Jewish social service programs in the state.

“He’s not someone who believes in a big-spending government,” said Keller of the local federation. “We are oftentimes asking for federal support we may not be getting from the congressman.”

In recent weeks, Jewish groups in Ohio pressed Boehner to oppose the final congressional budget plan, which included significant cuts to Medicaid and other social welfare programs. Boehner voted for the plan.

Boehner has not taken the lead on Israel issues like his predecessor, DeLay, or his chief competition for the leadership position, Rep. Roy Blunt (R-Mo.). But sources who know him said Boehner has been supportive on Israel, and will likely take on more of a leadership role in his new capacity.

Boehner led a congressional delegation to Israel in 1998 when he served as the Republican conference chair.

The American Israel Public Affairs Committee, the pro-Israel lobby, gave him a thumbs up.

“Congressman Boehner has traveled to Israel and has a solid pro-Israel record,” said Jennifer Cannata, an AIPAC spokeswoman.

William Daroff, vice president for public policy at United Jewish Communities, was a page for Boehner when he served in the Ohio state legislature.

In his first week in the leadership, Boehner has already ingratiated himself with some Jewish officials for taking a strong stance against restrictions on congressional travel, as part of lobbying reform packages being proposed in Congress.

Jewish groups are concerned because several proposals, including one offered by House Speaker Dennis Hastert (R-Ill.), would restrict or eliminate travel by non-profit and educational groups. Groups such as AIPAC rely on these trips to educate lawmakers on the Middle East and garner support for foreign aid and pro-Israel resolutions.

Boehner told the Washington Post last Friday that a ban on such trips would be “counterproductive” and called instead for more oversight in congressional travel.

Boehner’s office did not respond to calls seeking comment.

On the list were votes against reproductive rights, and support for a charitable organization’s right to hire staff of the same faith, even while receiving federal funds.

The Republican Jewish Coalition countered by highlighting his support for an educational advisory board that would oversee appropriate use of federal funds for Middle East programs at colleges and universities. Several Jewish groups have objected to federally funded college programs that support anti-Semitic and anti-Israel professors and programs.

Keller said Boehner’s views on domestic issues has often run counter to Jewish groups, but that she has always found an open door at his office.

“We’ll argue, we’ll agree, we’ll nosh and we’ll go forward,” she said. “And hopefully go forward with a better relationship with him.”