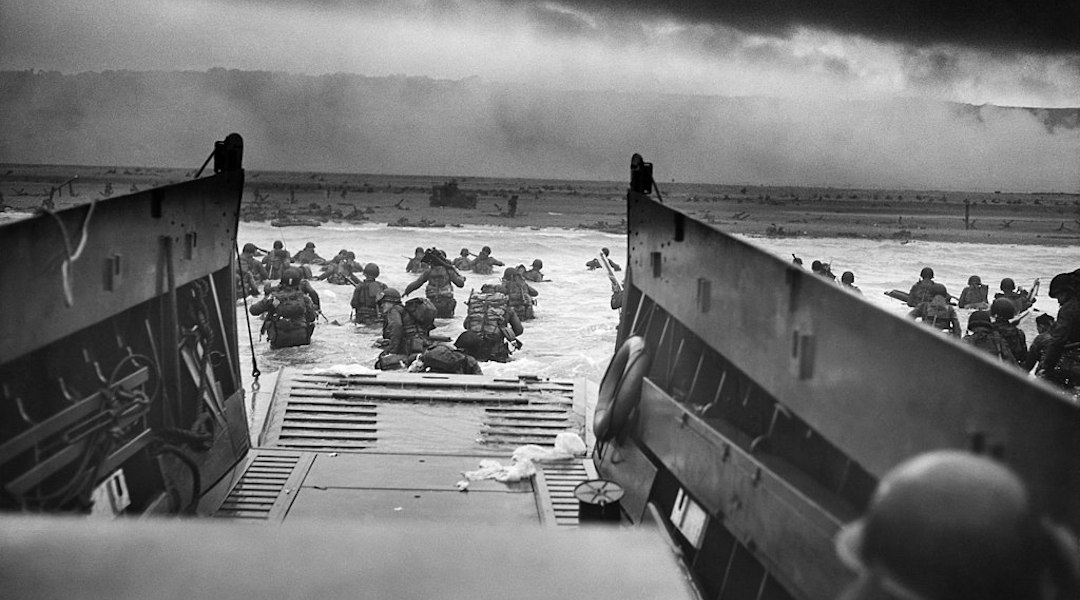 A 22-year-old Jewish officer from New York, Lt, Abraham Condiotti, who comes from a Sephardic Jewish family, was the commander of the first wave of small assault boats in the invasion landing between Cherbourg and Le Havre, while another New York Jew, Robert Halperin, was one of the first Americans perhaps the very first – to go ashore in France, it was reported here today from the invasion front.

Condiotti’s own boat, the first to hit the beach, landed less than 60 seconds after H-Hour, B. J. McQuaid, the New York Post correspondent, related in a dispatch written “aboard the combat transport U. S. Barnett in the transport area.” His boat carried members of an infantry company commanded by Capt. Leonard T. Schroeder, 25, of Baltimore, Mr. Quaid wrote. “Just as Condiotti’s was the first boat to hit the beach, Schrceder may have been the first American or even Allied soldier to invade Europe,” he said.

The news about Halperin’s landing, as related by William H. Stoneman, correspondent of the N. Y. Post in a dispatch dated “off the Coast of France,” reads: “One of the first Americans to go ashore in France – perhaps the very first – was Bob Halperin, formerly of the Brooklyn Dodgers professional football team. His job is to mark beaches for the assault infantry, daring job requiring as much brain as courage and barrels of both. He made a hero of himself at Port Lyautey in Morocco, and at Gela, Sicily. He is certainly making a hero of himself in there again this morning, doing a job on which the success of our assault depends and which not one man in a thousand would like to have.”

Halperin was an electrical contractor before joining the armed forces. Lt, Condiotti is a graduate of Brooklyn College. He went into the Navy in 1942. Early yesterday, when his parents heard that the invasion had started, they went to a nearby synagogue and spent four hours praying.