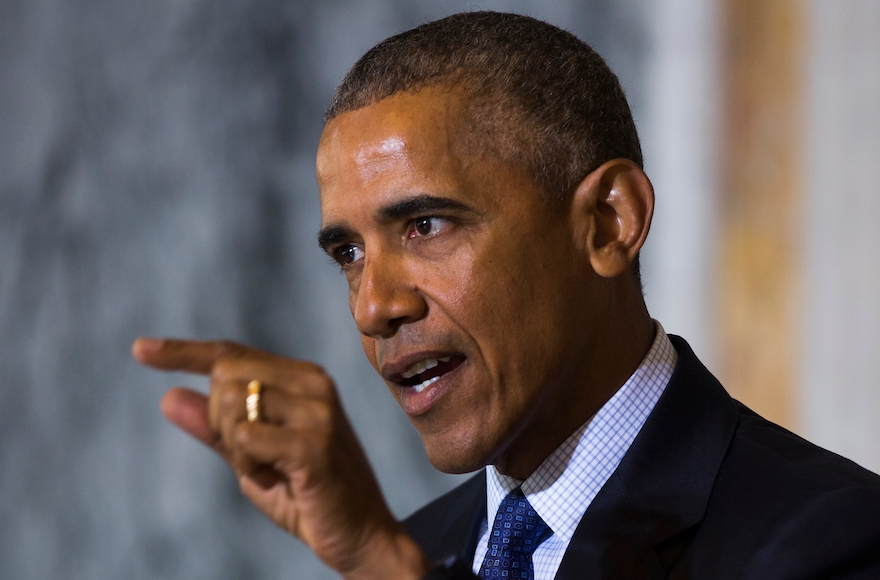 Barack Obama’s campaign has decided that the best way to respond to the Republican Jewish Coalition’s controversial advertisements is to shun the organization.

The decision comes as Jewish Democrats have become increasingly upset by advertisements attacking Obama that the RJC has run in Jewish newspapers across the country. The ads have called Obama’s views on Israel “dangerous” and “reckless,” and his advisers “pro-Palestinian,” “anti-Israel” and “hostile to Jews.”

An Obama Jewish outreach official did not return a call requesting comment, but a source familiar with the Obama camp’s thinking emphasized that the campaign is ready and willing to debate whomever the McCain campaign designates.

Obama representatives will not appear alongside anyone from the RJC, said the source, because it believes the organization is spreading false information about Obama through its series of advertisements and the poll of Jews in swing states it sponsored last month.

The survey, which the RJC said tested “negative messages” about Obama, included questions stating that Obama had served on a board that donated to a “pro-Palestinian organization” and that he had been endorsed by a Hamas leader. (Democrats noted that the “pro-Palestinian organization” primarily was devoted to social service work in Chicago and that Hamas later rescinded its endorsement.)

The RJC’s executive director, Matt Brooks, said he was “disappointed and saddened” by the Obama campaign’s decision.

“It does a disservice to the community” and “stifles debate,” said Brooks, who has defended the group’s ads as accurate and said the RJC is “raising important issues.”

The campaign’s decision already has affected one debate scheduled for Sunday evening at a Jewish community center in Van Nuys, Calif. Obama adviser Mel Levine said he pulled out of the event — sponsored by Council of Israeli Community, Los Angeles — after he was told last week of the Obama campaign’s new policy.

Levine, a former U.S. congressman, already had debated his scheduled opponent, RJC California director Larry Greenfield, three times, and said he was prepared to proceed with Sunday’s event prior to the campaign’s directive. But as a critic of the RJC’s tactics — Levine said last month that the group was “weakening Israel” by undermining the traditional notion of bipartisan support for the Jewish state — he backed the decision.

“I happen to agree with it,” he said, because appearing on the same stage with RJC gives the group an unwarranted “stature.”

“They’ve consistently misstated and misrepresented” the facts, Levine said, adding that at one of the debates his counterpart never even mentioned John McCain in his opening statement.

Levine emphasized that he was happy to appear with “any legitimate surrogate” from the McCain campaign. He noted that he was speaking to JTA on his way to the airport for a trip to Las Vegas to debate U.S. Sen. Orrin Hatch (R-Utah).

Levine did assist the Council for Israeli Community, Los Angeles in finding a replacement, UCLA law

professor David Kaye, for Sunday’s debate. Council first vice president Haim Linder said he was upset initially by the cancellation — he compared it to having the rabbi and photographer cancel a couple days before a wedding — but noted that Levine “went to work” and “got us a wonderful person” to replace him.

It is unclear how many other such events could be affected by the campaign’s decision.

The Jewish Republican group said that an Obama campaign representative had refused to appear with an RJC leader at an Oct. 26 forum at Temple Sinai in suburban Philadelphia. But an organizer of the forum told JTA that it had Pennsylvania leaders from both campaigns lined up for the event.

And a representative of the Stephen S. Wise Temple in Los Angeles said an Oct. 23 debate between Greenfield and Rep. Howard Berman (D-Calif.), a leader of Obama’s Los Angeles Jewish Community Leadership Committee, was still scheduled.

Asked what was wrong with the Obama campaign insisting on debating its McCain counterparts while RJC representatives could square off against perhaps National Jewish Democratic Council officials, Brooks said that such choices should be left up to organizers.

“The host organization should be free to invite who they wish,” he said. “It’s not up to us to decide who participates.”

The executive director of National Jewish Democratic Council, Ira Forman, has participated in a number of debates with RJC representatives this year and said he will continue to do so. Still, he said he could “sympathize” with the Obama campaign’s decision, calling the RJC’s tactics throughout the campaign “really low.”

Brooks said he would be glad to publicly defend his group’s advertisements, and issued a challenge.

“I will debate anybody the Obama campaign chooses,” he said, and “we will go through every single ad” and discuss the RJC’s poll as long as “we debate their polls,” too.

“I want to have that conversation with the Jewish community,” he said.