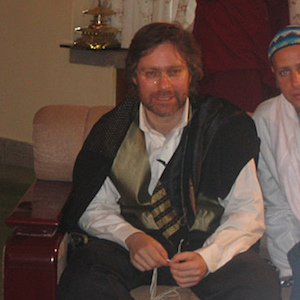 A disgraced American rabbi with a tangled history of alleged sexual misdeeds is relaunching his career as a spiritual mentor and backtracking from an apparent confession he signed two years ago.

Rabbi Mordechai Gafni acknowledged his “sickness” in 2006 after several students at his Israeli institute claimed they were lured into sexual liaisons through deception and psychological manipulation. For decades Gafni had been dogged by claims he engaged in improper sexual activities, including allegations that he molested two teenage girls.

Now Gafni is back with a new Web site that directly challenges the claims against him.

Based in Salt Lake City, Gafni, now known as Marc, is a practitioner of a Kabbalah-inspired philosophy called evolutionary spirituality.

In a statement on the controversy posted to his Web site, Gafni said the relationships he engaged in while in Israel were all “mutual and consensual,” broke no laws and did not involve an abuse of authority.

He said the letter he wrote was misunderstood to be a confession that he acted improperly.

“I believed that writing the letter would, in some measure, end the attacks, and give me time to heal and think things through,” Gafni wrote on his site, MarcGafni.com.

Gafni did not respond to requests for an interview.

A former Orthodox rabbi and later a leading figure in the Jewish Renewal movement, Gafni first gained attention in 2004 when The New York Jewish Week reported on longstanding accusations against him.

Gafni told the newspaper that one of the girls was troubled and had made up the story, but he did acknowledge a sexual relationship with the other girl when he was a 19-year-old rabbinical student.

Two years later, after the news broke in Israel, several of those same rabbis backtracked, arguing that the new accusations were different from the old ones.

Waskow recently told JTA that he has reviewed the material on Gafni’s Web site and still sees â€œnothing whatsoever to change my mind about the wisdom of the decision that several organizations made two years ago that he should not continue to teach under their auspices.”

A section of Gafniâ€™s new site dedicated to the controversy includes letters on his behalf from several spiritual leaders, attorneys and counselors, as well as the report of a forensic psychologist who administered a polygraph test.

Several references to e-mails and instant messages between Gafni and the Israeli women that supposedly prove the nature of their relationships were not exploitative. The correspondence is not available on the site.

“In each of these relationships, as is usually the case between men and women, there were complex power dynamics in which each side had power and vulnerability,” Gafni wrote regarding the Israel controversy. “While I never promised exclusivity to any, in retrospect I see I did fail to recognize two things. First, that my non-exclusivity might in itself be experienced as hurtful. Secondly, that these involvements themselves, and particularly the lack of transparency around them, might be experienced as painful or problematic.”

Gafniâ€™s Web site is filled with allusions to his problems and explanations.

Now the biography says that Gafni will focus on â€œintense inner spiritual and psychological reflection on the course of his lifeâ€ and â€œpartnering with social activist leaders to create a new, grass-roots human rights movement.â€

â€œWhile Marc Gafni will continue teaching, he wishes to do so as a spiritual â€˜artistâ€™ rather than as a rabbi, guru, or formal teacher,â€ the Web site says.

One of Gafni’s defenders is Rabbi Gershon Winkler, a New Mexico rabbi who runs Walking Stick, an organization that combines Jewish teachings with Native American wisdom.

“Do I believe that the women here experienced pain? Yes I do,” Winkler wrote in a letter posted on Gafni’s site. “Do I know that this is not a story of abuse of sexual harassment as it was reported in public forums? I am sure it is not. Do I believe that the pain caused by all of us to Rabbi Gafni far exceeds the pain that anyone else can claim to have experienced? Absolutely.”

In the letter, Winkler acknowledged that he fathered a child with a student, carried on several “intimate relationships” with students over the years and said he is currently in a relationship with two women.

Many in the Jewish Renewal leadership, he asserted, have engaged in similar sexual behavior, including some who are now critics of Gafni.

Waskow, one of the leading figures in the Renewal movement, rejected that line of argument.

“If there were, years and years ago, people in this or any other movement who did behave in ways that we would now find ethically prohibited, it was precisely because of the experience of the pain and emotional disasters and spiritual disasters created by that kind of behavior that we adopted the ethical rules that now apply,” Waskow said.

“Maybe some of that did take place, but we grew enough to decide this was not a good idea,” he said. “What he’s describing as hypocrisy is a shift over a 25-year period of time in which our movement and people in our movement grew considerably.”

Winkler told JTA that he believes it is wrong to insist on an “across-the-board” ban on sexual relationships involving rabbis and followers, teachers and students, and counselors and patients.

Gafni, he added, is a victim of sexual McCarthyism.