Oskar Schindler: A Man for All Reasons 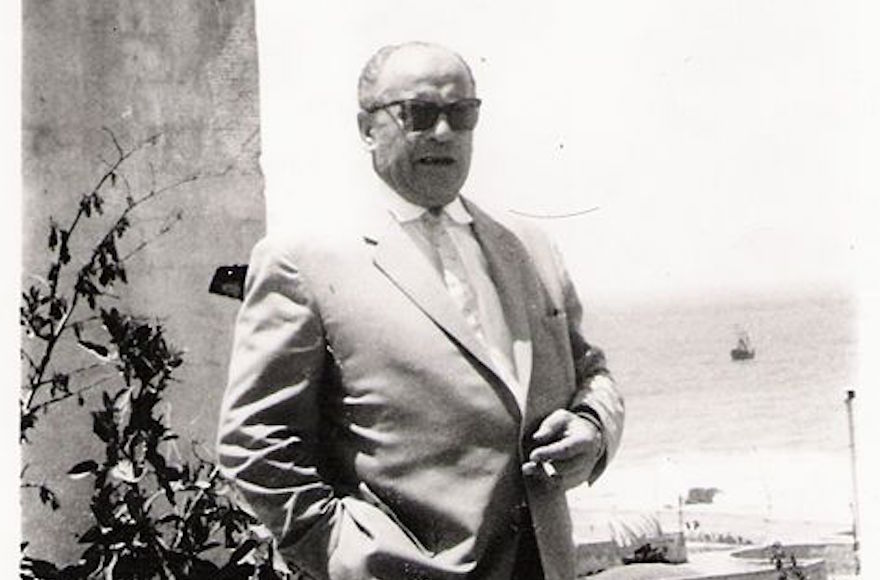 “I hated the brutality, the sadism and the insanity of Nazism. I just couldn’t stand by and see people destroyed. I did what I could, what I had to do, what my conscience told me I must do. That’s all there is to it. Really. Nothing more.” Oskar Schindler didn’t look at anyone in particular as he said this. But three men who sat around a table with him at the executive office of the American Friends of Hebrew University gazed affectionately at the tall, powerfully built 64-year-old man who spoke in German and haltingly in Yiddish.

For these three men and for 72 other people milling around outside the room, Schindler’s presence evoked the memory of a long ago time when the terror of Nazism was dissolved by the compassion and humanity of a man who three times braved arrest by the Gestapo to save some 1,400 Jews from the Nazi gas chambers.

That was almost 30 years ago, and now–several days ago–75 of the 1,400 whom he saved joined together to pay tribute to Schindler. The three men–Murray Pantirer, Isak Levenstein and Abraham Zuckerman, partners in a successful building construction firm in Hillside, N.J.–agreed that the tribute to “our friend” was the very least they could do for a man “whose sense of justice and courage knew no bounds.”

The 75 people had gathered to announce that they had raised $120,000 to dedicate a floor of the Truman Research Center at the Hebrew University on Mount Scopus in Jerusalem “in a living tribute to Oskar Schindler.” The floor will house a “Book of Life” containing “the facts of Schindler’s humanity” and the names of all the survivors, most of whom now reside in the US.

Pantirer, Zuckerman and Levenstein spearheaded the drive to raise the $120,000 for “our friend” who now resides in Frankfurt, Germany, and works for the German Friends of the Hebrew University. In 1942, Pantirer who was then 14 years old, Zuckerman who was then 33, and Levenstein who was 14, all from Cracow, and other Polish Jews were being herded into slave labor camps, concentration camps and death camps by the Nazis. The able-bodied were sent to labor camps in Plaszow, Zablocie and Brunnlitz in Poland and the then-Sudetenland in Czechoslovakia. Pantirer, Levenstein and Zuckerman were among those sent to labor camps.

Schindler, the son of a prosperous family which owned a farm equipment factory in Zwittau in the Moravian section of Czechoslovakia, acquired a kitchenware factory near Cracow where the Nazis had expropriated Jewish property. “I was an Austrian or a Pole – the border changed so many times I lost touch,” he said, “I was repelled, no. really horrified by the brutality of the Nazis. I wasn’t sure what I could or should do, but I knew I had to do something. I had known Jews in my youth and I liked them. These Nazis…”

In 1941 the Nazis issued an edict that Jews could escape enforced transfer from the area only if they were employed in German-owned firms. Schindler hired Jews who sought work. He built barracks for them to live in within his factory compound and smuggled in the wives, parents and children of the workers. He hid them until the Jewish underground could effect their escape. At other times, Schindler bribed Gestapo and other high Nazi officials to overlook infractions on the part of his workers. His wife, Emilia Pelse Schindler, fed and cared for the Jewish inmates and organized a hospital staffed by Jewish slave labor.

By 1944 the Nazis issued orders for all factories to be moved westward as the war appeared to be nearing its end and the German army was abandoning Poland. Slave laborers, Schindler recalled, were ordered to death camps. He obtained permission to switch production from kitchenware to armaments for the Luftwaffe and relocated his factory in Brunnlitz.

He demanded that all his workers–almost 900 by then–accompany him because there was too little time to train new workers. The Nazi high command approved the request and provided him with 200 more Jews from Plaszow to fulfill the quota for the Luftwaffe. It was here that Zuckerman, Levenstein and Pantirer first met Schindler.

Levenstein recalled that Schindler “saw to it that no one in his camp was beaten, that there was enough food so that no one would go hungry. He managed to get 300 women out of Auschwitz on the excuse that he needed people for work. To accomplish this he had to go to Berlin. The SS was on top of him and the Gestapo) arrested him three times but let him go because the Luftwaffe needed the armaments.”

Zuckerman described another instance of Schindler’s humanity. During a freezing snow storm, the Nazis abandoned a train-load of Jews packed into cattle cars on a railroad siding near the camp site and left them to freeze to death. When Schindler learned about the train he ordered all able-bodied men in the camp to bring the survivors out of the train and into the camp. Schindler, who helped to unload these cattle cars, fed and clothed the survivors and brought them back to health.

A TOAST TO LIFE

In 1945, when the Red Army in the east and the Allied armies in the west caught the German army in a pincer and the war’s end was imminent, Schindler, the three men related, gave a party in the camp and announced that “it was all over.” He armed a small group of inmates with rifles and guns and told them to protect the others against the retreating German army which might come through the camp and unleash a final bloodbath. Certain that his friends would be safe, Schindler and his wife headed for the American lines.

After the war, Schindler and his wife emigrated to Buenos Aires where the two received aid from the Joint Distribution Committee. Mrs. Schindler still resides in San Vincente, a province of Buenos Aires, and is aided by a monthly stipend from several Jewish organizations including the local B’nai B’rith Lodge and the Israelite Philanthropic Association.

In 1967, Schindler received the Martin Buber Peace Prize and has been honored by the German government, Pope Paul VI and the Yad Vashem in Jerusalem. Now he was back with his friends speaking to them partially in Yiddish which he had learned during his association with them in the labor camp. Just before the ceremony began, Schindler and his 75 friends lifted goblets filled with wine and, in unison, toasted “L’chayim.”