The 1947 song “Nature Boy,” written by eden ahbez, has a long and strange history. A jazz standard, it’s been performed by Nat “King” Cole and Miles Davis, and its lyrics were quoted at the end of the film Moulin Rouge (“The greatest thing you’ll ever learn/is to love and be loved in return”). Recently, its lyrics were also set to the tune of the Mad Men theme in a stunning performance.

ahbez  himself (the lowercase “a” is his spelling) was quite a character. He was born George Alexander Aberle, to a Jewish father and a Scottish-English mother, but later embraced Eastern mysticism. He became a hippie before its time, living in the woods beneath the Hollywood sign, clad in a robe and sandals and only eating nuts and fruit.

However, the song “Nature Boy” wasn’t entirely his own. Herman Yablokoff, a star of the Yiddish theatre, believed that the melody was taken from his own song “Shvayg, Mayn Harts” (“Hush, My Heart”), from his 1935 musical Papirosn (Cigarettes). According to Yablokoff, ahbez claimed that he’d been haunted by “the melody, as if angels were singing it…in the California mountains.” ahbez offered a $10,000 payoff but Yablokoff refused, saying only that he wanted ahbez to admit the song was stolen. “If he heard angels,” Yablokoff said, “they must have bought a copy of my song.”

The suit was eventually settled out of court, with ahbez paying $25,000 to Yablokoff. (If he were still alive, Antonin Dvořák would also have grounds for a lawsuit–according to musicologists, “Nature Boy” also samples from his Piano Quintet No. 2 in A.) And the melody that once haunted ahbez continues to haunt us today.

“My Cruel Land”: An Israeli Poet Discovers Loss
The Jewish Valentine’s Day
The Maccabeats Jam With Obama
Two Jews in Love (in Yiddish) in Havana 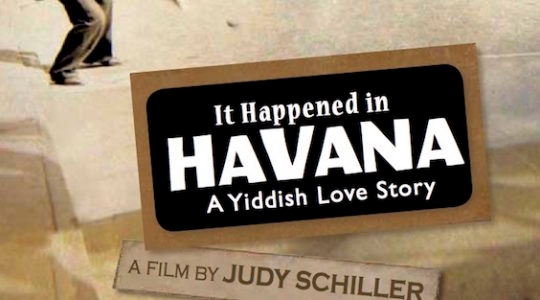