The Godfather in Yiddish

Some parodies exist solely because it’s funny to mash up two disparate genres. Take, for instance, YouTube videos such as Ten Things I Hate about Commandments (Bible stories + high-school movies), and the Fiddler on the Roof/You Got Served trailer (1800s Jewish ghetto/2000s African-American ghetto).

In a new Youtube video, the first scene of The Godfather is dubbed into Yiddish. (Watch it here–and don’t worry, there are English subtitles.) The opening lines of Italian immigrant Amerigo Bonasera’s monologue translate almost seamlessly into the Jewish immigrant experience. “I believe in America,” he says. “America has made my fortune. And I raised my daughter in the American fashion.” Bonasera explains that his daughter started hanging out with non-Italians, got a non-Italian boyfriend, and was subsequently raped and beaten. His speech is heartbreaking and chilling, with equal amounts of overprotectiveness and powerlessness. And, indeed, it reads like many immigrant tales–except for a few details, Godfather could very well be a story by Abraham Cahan or Anzia Yezierska.

The voiceover takes a few liberties in the translation. When Bonasera refers to his daughter’s boyfriend, the subtitles say “not an Italian,” but the voice says “a goy.” And the translated title, Der Kvater, literally refers to the person who carries a Jewish baby boy to the mohel to be circumcised. Traditionally, that person takes on the role of a protector or guardian to the boy in the rest of his life–indeed, much like the role of a godfather.

Who Hid the Chametz?
‘The Sound of Music’ in Hebrew Is Lovely — And Hilarious 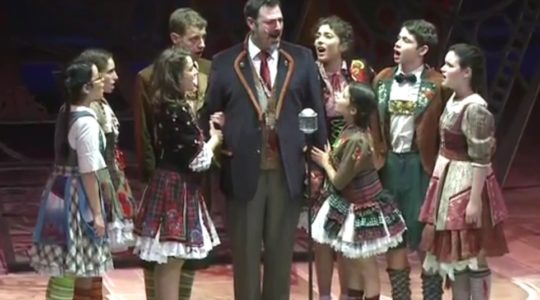 Alexander the Jew
The Mongrel Jews