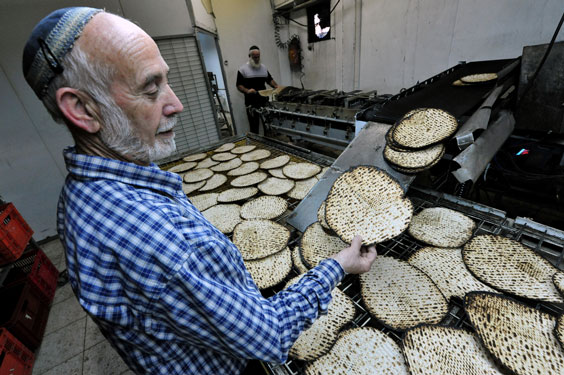 Okay, that’s a bit of an exaggeration. But progress is a touchy subject, particularly where Jewish law is involved.

In 1857, the first matzah-baking machine was invented in Austria. The automated device kneaded and pressed the dough, and the result was a thin, perforated circle that was then placed in an oven. Over time, improvements sped up the process and squared off those round matzot.

Meanwhile, certain community leaders were having none of it. Letters began to circulate arguing for the prohibition of matzah made by the newfangled gizmo. One Solomon Kluger of Brody, in what is now Ukraine, wrote that the advent of the machine would deny poor bakers to earn money for their Passover needs by eliminating jobs. He claimed that leftover dough caught in the cogs would leaven, thereby treyfing up the matzot. And, finally, that the presence of an adult was required to make sure the process took less than 18 minutes.

Rabbi Joseph Saul Nathanson of Lemberg, or Lvov, however, had him. He noted the double standard of accepting the printing press vis-à-vis the poor scribes who lost work to it. He pointed out that an adult’s presence was necessary to activate the machine anyway. But if Brody had known that 160 years later a matzah machine was providing sustenance to Ukrainian Jews, he might have bested Nathanson and gotten the great pleasure of an “I told you so.”

A Simulated Diary of a Jewish Hamburger