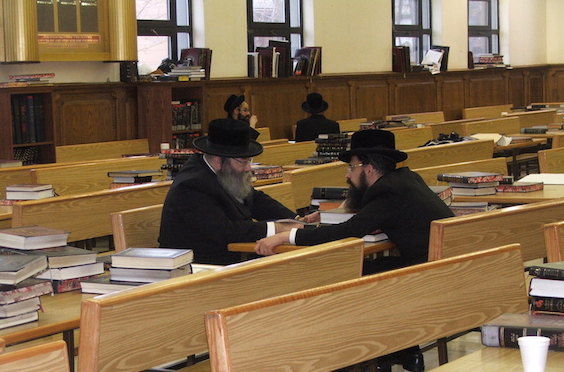 Christmas Eve has such a marked place in European Jewish history that it has its own name: Nittel Nacht. As a precaution against the violent acts by marauding Eastern European and Russian Christians, Jewish study houses would be shuttered, mikvehs would be closed, and many would stay home playing cards and chess.

And then, at the stroke of midnight, Torah learning would resume.

But why? And why are these customs still observed in New York’s Hasidic communities?

Because there’s a spiritual explanation, too:

Some who believe the Trinity is a form of idolatry, JTA reports, believe that on Christmas Eve, “dark forces were about, rendering it unfit for the purity of Torah study.” Others, that Jesus and those celebrating his birth should not undeservedly accrue the holy merit of Torah study.

But that argument draws the opposite conclusions, too, according to Yosef Rapaport, a Vishnitzer Hasid and media relations coordinator for Agudath Israel of America: “If the Jews are asleep, the bad angels are criticizing the Jews: How come you’re not worshipping me when they are? Why aren’t you learning Torah?”

It’s not exactly Chinese food and a movie, but you know—to each his own.

Lilith, Temptress of the Ancients