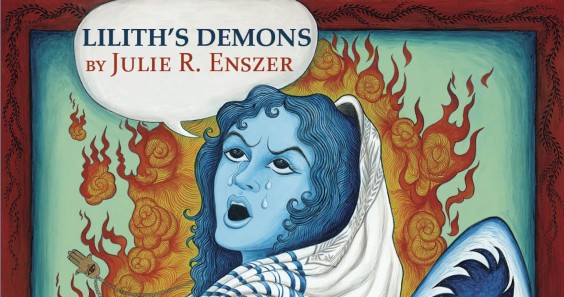 The biblical figure Lilith has been called a temptress, a “dark maid” and a feminist poster child. In a lot of Jewish folklore, Lilith is created as Adam’s first wife. She refuses to obey Adam, so her punishment is to give birth to one hundred demons every night. The demons are plagued too – they have an edict to kill newborn children before sunrise.

Poet and essayist Julie R. Enszer has taken on this mythological figure in her newest book of poetry, Lilith’s Demons. It’s not exactly pretty – after all, she’s writing about murderers who are consigned to squeeze the life out of newborns. But Enszer really climbs inside the skin of this woman and her fierce children. She finds their vulnerabilities and human hungers too.

As Enszer writes in her poem, “Lila and Liba:”

We are together
in this daily cycle,
gasping for freedom.

Enszer writes about Lilith with reverence and her demons with longing. Whether they are outcasts or crusaders for a new world of female empowerment is really up to the reader’s interpretation. This collection is a sort of invitation to look inside the nights where Lilith and her demons roam, and see if we can find hope.