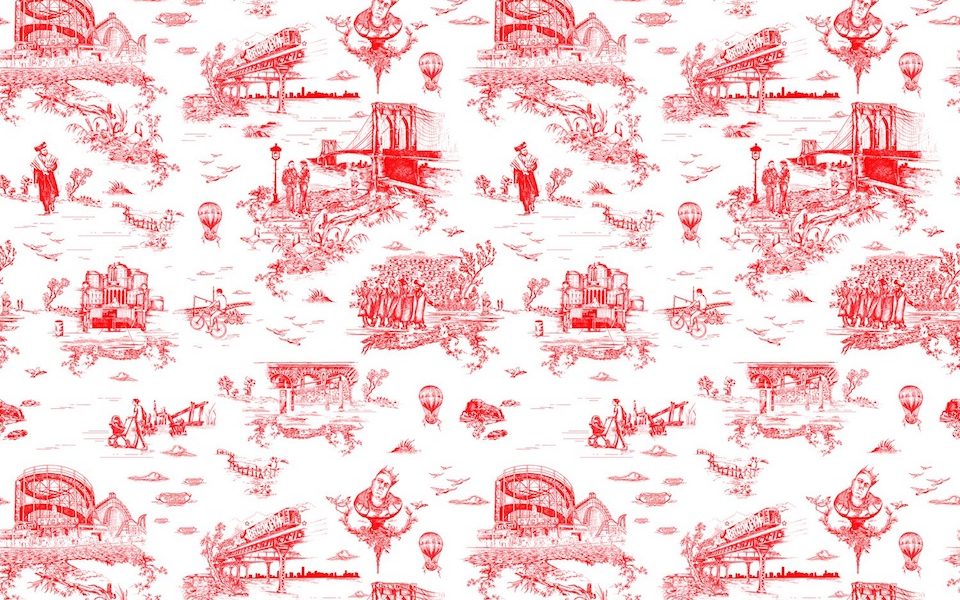 Michael “Mike D” Diamond, who rapped, sang, and played drums for everybody’s favorite hardcore-punk-turned-hip-hop trio, is multi-talented, so it’s no surprise his foray into wallpaper design is the stuff of dreams—so long as your dreams take place in Brooklyn.

Designed in collaboration with Ficarra and Adela Qersaqi of Revolver New York, the wallpaper plays off a traditional French Country Toile pattern, which typically features repeated images of pastoral scenes like picnics and flowers. “Brooklyn Toile” portrays iconic scenes from Diamond’s beloved borough: Coney Island and Notorious B.I.G. bump up against a woman pushing a stroller and a traditionally decked-out Hasidic Jew. Diamond used the wallpaper for his own home in the Cobble Hill neighborhood of Brooklyn, where he lived with his wife, Tamra Davis, and two sons. (In 2015, they sold the home (and the wallpaper) for $5.5 million.)

These days, Mike D’s spending his time in Malibu, so his Toile might feature avocado trees over subway tracks. But he still stays true to his New York roots: nailed to the frame of his giant front door is a small wooden hand making the Hawaiian “hang loose” sign. “That’s a surf mezuza,” he told Rolling Stone. “A surfzuza?”