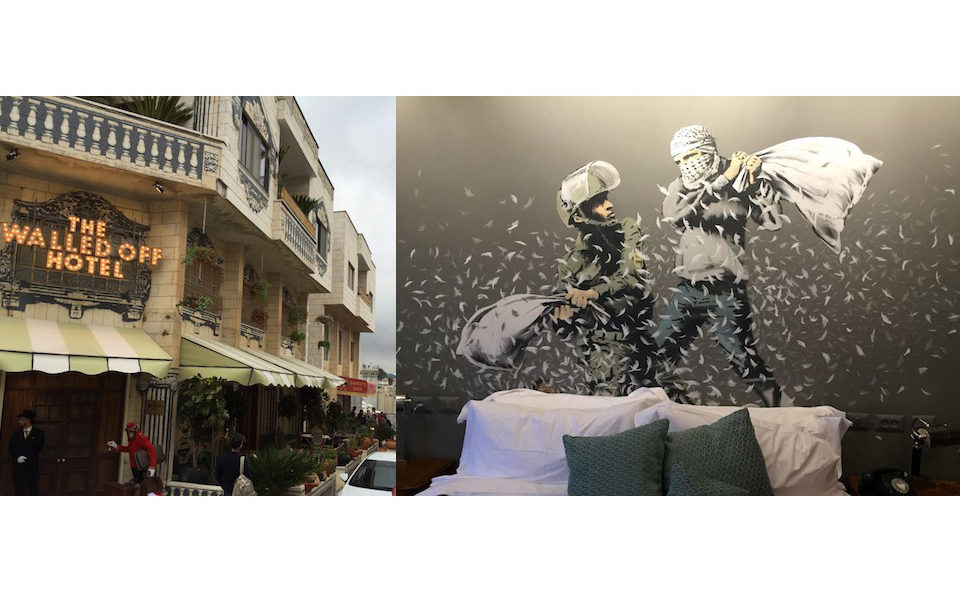 For five-star accommodation, excellent turndown service, and a fine-tuned political consciousness, look no further than the latest creation of Banksy, the anonymous satirical British graffiti artist whose new hotel has scenic views of the West Bank separation wall.

Dubbed “The Walled Off Hotel”—not to be mistaken for the “Waldorf”—the Bethlehem site is Banksy’s latest headscratcher of a project: a luxury boutique with the self-described “worst view in the world.” Famous for his subversive and wry sense of humor, Banksy may be the only person who could have pulled this off.

The trilingual museum, which opens to guests in two months, mixes the trappings of English hospitality—porcelain teacups and a self-playing piano—with classic Banksy grime. Think: graffitied rats and protestors throwing flowers instead of bombs, a headboard mural depicting a feather-fluttering pillow fight between a Palestinian and an Israeli soldier, and everywhere, fake security cameras mirroring the real ones that dot the separation barrier next door.

The hotel’s biggest statement is its location in Bethlehem, a city in the West Bank, but just minutes down from Israel’s West Jerusalem. Banksy hopes that Israelis will visit the hotel (though they’re not allowed into Bethlehem) and meet local Palestinians, sparking much-needed dialogue. Farfetched or not, it’s a pretty cool idea.