10 people attended a Jerusalem prayer service that usually draws tens of thousands. Even that was a crowd. 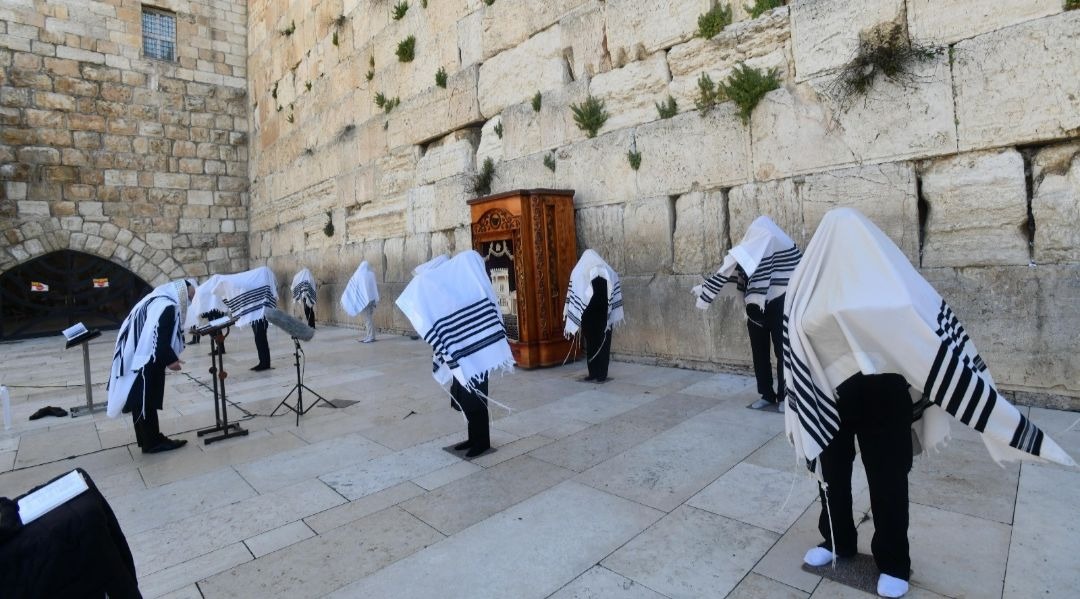 The Priestly Blessing for Passover is recited at the Western Wall by a limited number of kohanim due to the current coronavirus pandemic, on April 12, 2020. (Haim Zach/GPO and The Western Wall Heritage Foundation)
Advertisement

JERUSALEM (JTA) — A prayer service that typically packs the Western Wall plaza during Passover on Sunday took place with just over 10 men present — and even that was a crowd.

In a regular year, tens of thousands of people would make their way to the Old City of Jerusalem to recite the priestly blessing in a mass service held during Passover, Shavuot and Sukkot, pilgrimage festivals for ancient Jews.

But this year, because of the coronavirus pandemic, large gatherings are banned in Israel and around the world. So the Israeli health ministry allowed just 10 men, all residents of the Old City’s Jewish quarter and members of Judaism’s priestly class, to pray together.

They included U.S. Ambassador to Israel David Friedman and were led by Shmuel Rabinowitz, rabbi of the Western Wall and Holy Sites. In all, there were more people present than are currently allowed to gather under any other circumstances — possible because the healthy ministry has given Rabinowitz special permission to grant exceptions to the rules.

Friedman tweeted pictures showing the worshippers draped in prayer shawls and standing at significant distance from each other. “Last year I was among 100,000; this year, unfortunately, far less,” he wrote. “I will pray that the world is spared further illness or sorrow from COVID-19 or otherwise.”

The group prayed for all who have fallen ill and for the end of the coronavirus pandemic.

“These days, with the entire Jewish people and everyone in the world looking up to Heaven, the priestly blessing is that much more significant,” Rabinowitz said during the service. “We know that the gates of tears are never closed, let alone the gates of the Western Wall. May the priestly blessing and the prayers of masses of Jews to protect us from harm rise up to Heaven.”

The service at the Western Wall was not the only prayer gathering in Jerusalem Sunday, which was also the Christian holiday of Easter. At the Church of the Holy Sepulchre, a handful of clergy members recited Mass in an otherwise empty space.

When the church closed to visitors late last month, the Muslim man entrusted with the keys said it was the first closure since 1349 — the Black Plague.