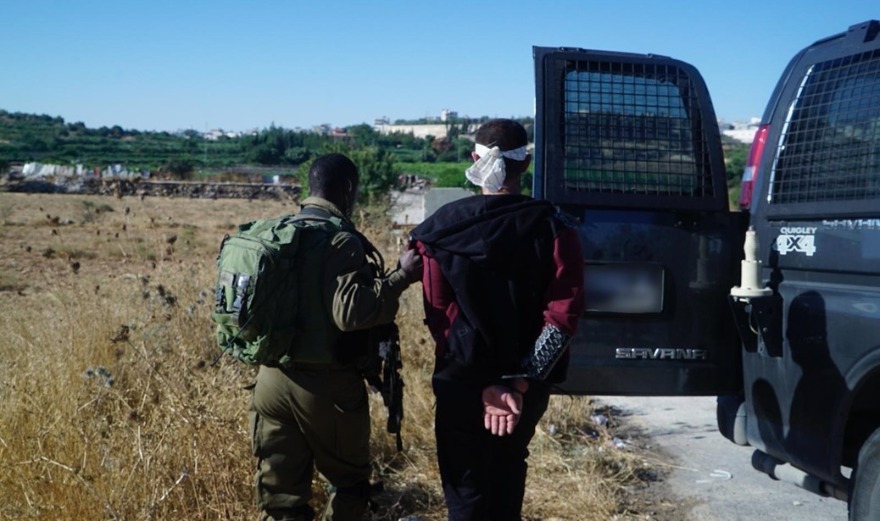 Israeli soldiers arrest two Palestinian men suspected in the muirder of yeshiva student Dvir Sorek on Aug. 10, 2019 from their homes in the Palestinian village Beit Khalil, north of Hebron in the West Bank. (Courtesy of the IDF)
Advertisement

The two men, identified as Nazir Atafra, 24, and Qasem Atafra, 30, from the Palestinian village Beit Khalil, north of Hebron in the West Bank, were arrested by Israeli soldiers at their homes. The arrests come after a joint intelligence operation by the Israel Defense Forces, the Israel Security Agency, the Israel Police and the Border Police, the IDF said Saturday night in a statement.

The men, who are cousins, have had no previous arrests, though Nazir Atafra was identified as a Hamas activist. His brother, Akrama, and Qasem’s wife, Ines, also were arrested in the raid and are suspected of helping to hide the alleged killers after murdering Sorek.

The soldiers also confiscated the suspects’ vehicle, which they allegedly used to carry out the attack, according to the IDF.

During the operation about 100 Palestinians in the village rioted and threw stones at the soldiers. The soldiers used riot dispersal methods against the demonstrators, according to the IDF.

The arrests came two days after the body of yeshiva student Dvir Sorek was found stabbed to death in the West Bank’s Etzion settlement bloc.

“In recent years, our forces have laid their hands on all of the Palestinian murderers who have attacked Israelis and today, they have done so again. We will continue to forcefully fight terrorism on all fronts,” Prime Minister Benjamin Netanyahu said in a statement issued on Saturday night.

We have found the terror squad that murdered IDF soldier Cpl. Dvir Sorek.

In an operation—together with Israeli security forces—we located and arrested the 2 terrorists suspected to have committed the attack.

We will continue in our fight against terror. pic.twitter.com/dEtxpsbpMH