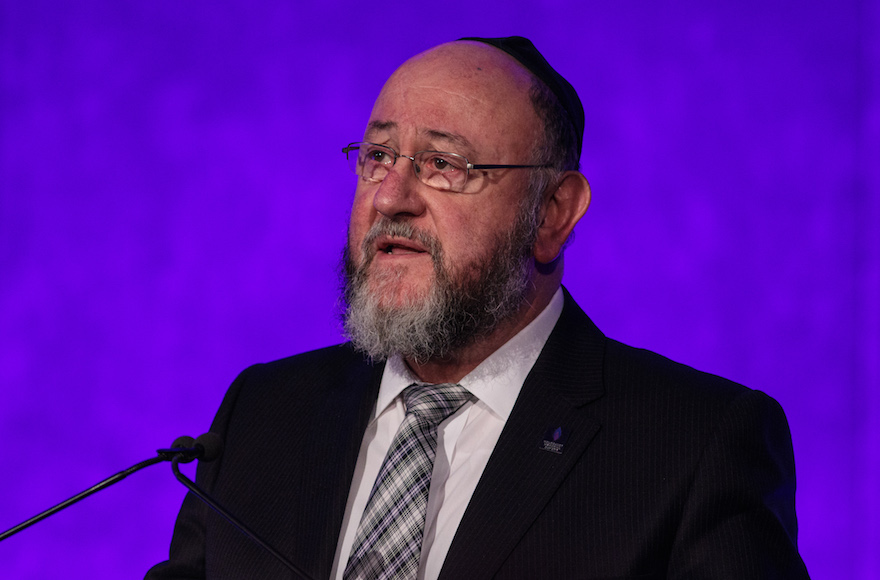 (JTA) — More than 1,200 people attended a funeral near London to bury the remains of six unknown Jews who died in the Holocaust.

Fifty Holocaust survivors escorted a small coffin carrying the bones and ashes of five adults and one child.

The remains were transferred earlier this month to the office of the chief rabbi from the United Kingdom’s Imperial War Museum, where they had been held since 1997, part of a collection of Holocaust-related items said to have originated at Auschwitz.

“We don’t know who you are, your name, if you were male or female or the details of your family. But we do know you were Jewish. All of us here feel a strong connection to you,” British Chief Rabbi Ephraim Mirvis said in his eulogy.
“Surrounding you right now are Holocaust survivors, unlike you who perished, they managed to survive,” he also said. “And since the end of the Shoah they have been your prime ambassadors, bringing a message of peace, togetherness and unity to the world, educating all of our societies about what transpired to you, with the hope that it would never happen again.”

It was Britain’s first public funeral for Holocaust victims, the London-based Jewish News website reported. It was attended by dignitaries, Parliament members, representatives from the Imperial War Museum, a representative of the Queen, and members of the Jewish community.

Prince Charles sent a personal letter ahead of the funeral, in which he wrote: “As patron of the Holocaust Memorial Day Trust, I just wanted to write and say how moved I was to hear about the arrangements being made to provide dignified and final rest to six victims of the Holocaust.”

He offered his “most heartfelt condolences” to the Jewish community.