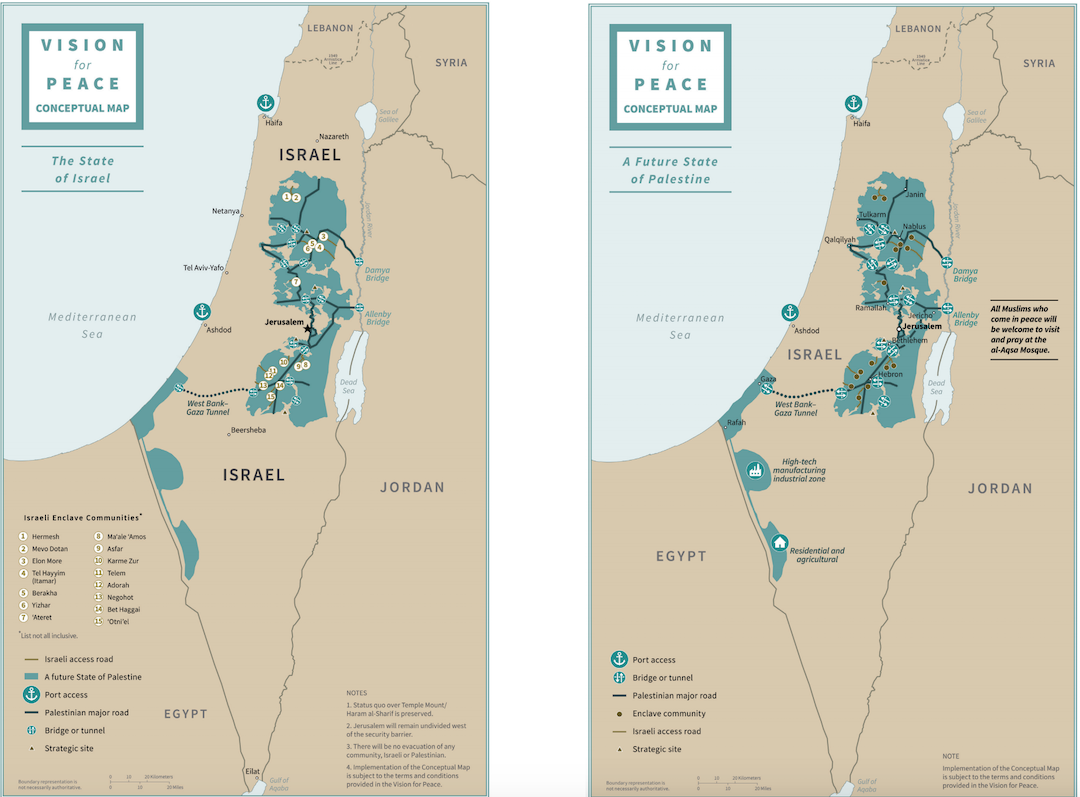 President Trump's peace plan includes two detailed maps of what a two-state solution could look like. (Screenshots from WhiteHouse.gov)
Advertisement

The graduates, from a range of programs, signed on to a letter sent Sunday to the Conference of Presidents of Major Jewish Organizations, American Jewish Committee and AIPAC.

“Our years abroad inspired us to take positions of leadership within our local Jewish communities,” the letter says. “As American and Israeli Jews, we are concerned for the safety, security, and future of the state of Israel. As leaders of America’s Jewish youth, we see it as our obligation to object to the dangerous steps toward annexation being pursued by the current Israeli government.”

The coalition deal between Netanyahu and Defense Minister Benny Gantz, who will take over as prime minister in 18 months, permits annexation from July 1.

Netanyahu said last week in a meeting with government ministers that he has a target date in July to extend Israeli sovereignty over about 30% of the West Bank, which is provided for in the Trump Israeli-Palestinian peace plan.

“As young American Jews, who spent a formative year of our lives in Israel, we unequivocally condemn the threat of unilateral annexation. We know that this plan undermines the dream of Israel as a Jewish and Democratic state, threatens Palestinian human rights, and endangers Israeli security,” the letter says. “If enacted, it will irreparably harm the strength of the US-Israel relationship. Therefore, we believe it is our obligation to oppose this plan. We demand that our elected officials and leaders of American Jewish organizations stand with us, and issue public statements condemning annexation.”