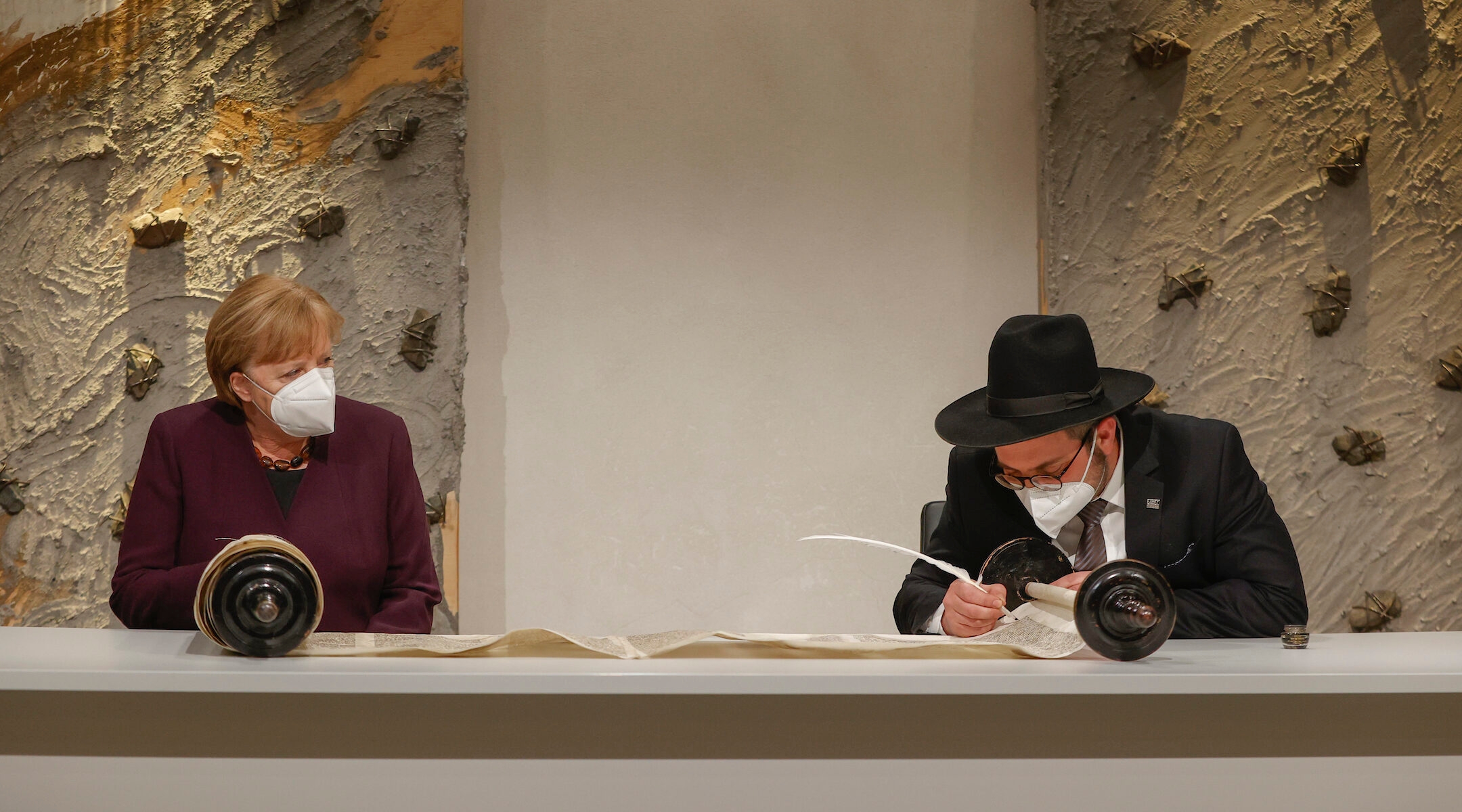 The 18th century Sulzbacher Torah, which survived the National Socialist Kristallnacht pogrom in 1938 and lay unnoticed for decades in a cabinet in a synagogue in Amberg, Bavaria, was brought back to ritually usable condition thanks to a 45,000 euro donation from the German federal government. In June, the Torah will be used once again for services in the Amberg synagogue.

In the Reflection and Prayer Room in the Reichstag, or German parliament building, Merkel sat by as Shaul Nekrich, rabbi of the city of Kassel, inscribed the final 12 letters of the scroll. The chancellor, who will step down following national elections in September, was among several dignitaries who took part in the ceremony.

This was one of several events in Germany marking the 76th anniversary of the liberation of the Auschwitz death camp. Public events marking Holocaust Remembrance Day were drastically scaled back, many of them going online due to measures to prevent the spread of the coronavirus. Today’s ceremony was broadcast on the German parliament’s website.

The Sulzbacher Torah had lain forgotten until 2015, when Rabbi Elias Dray found it in the shrine of the Amberg synagogue, where he officiates. Written for the synagogue in nearby Sulzbach, Bavaria, it had been moved to Amberg in 1934, one year after Hitler took power. It was there unnoticed there for some 70 years.

The only damage was due to the “ravages of time,” according to a statement from the Conference of European Rabbis. “Many of the letters… had faded.” The local Jewish community could not afford the costs of restoration. Bavarian member of parliament Barbara Lanzinger, who is Catholic, was able to secure German federal funding.

The restoration was carried out by Jehuda Freund in Bnei Brak, Israel, and the Torah was kept temporarily at the Jewish Museum Berlin before today’s completion ceremony.

Dray, who like Nekrich is a member of Germany’s Orthodox Rabbinical Conference, described the ceremonial completion of the Torah in the German Bundestag as “a moving and historic moment.”

The Torah “survived the darkest times in German history,” he said in the statement. “With its ceremonial completion by the highest constitutional authorities, the Sulzbach Torah scroll symbolises a new pact to protect Jewish life in Germany and to make it possible in the long term.”

Among those participating in the event were Charlotte Knobloch, president of the Jewish Community of Munich and Upper Bavaria, who survived the Holocaust in hiding in Germany; Josef Schuster, president of the Central Council of Jews in Germany; German politician Marina Weisband, whose Jewish family emigrated from Ukraine to Germany in 1994; and Bundestag President Wolfgang Schäuble.