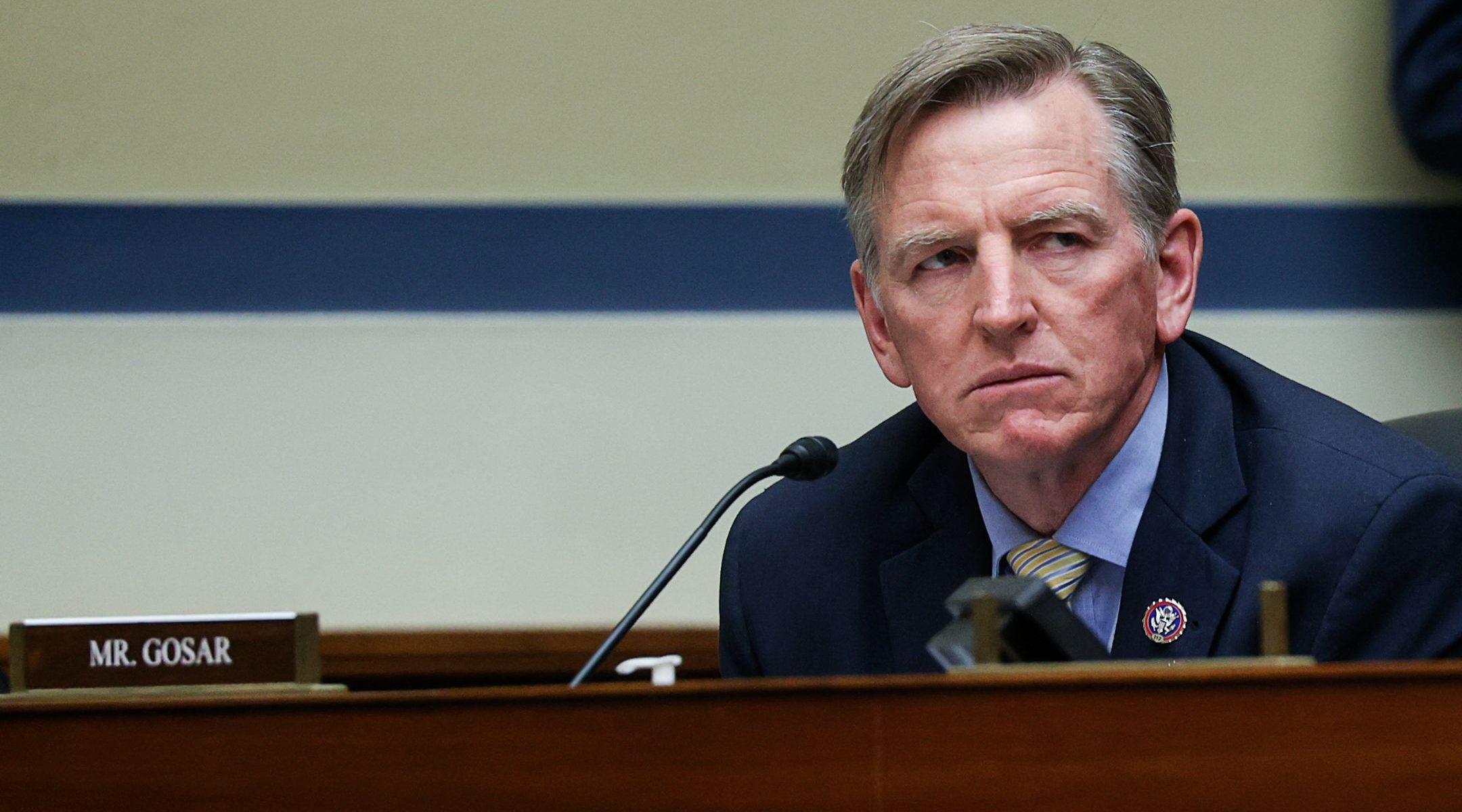 Rep. Paul Gosar of Arizona is seen at House committee meeting on the Jan. 6 attack on the U.S. Capitol, May 12, 2021. (Jonathan Ernst/POOL/AFP via Getty Images)
Advertisement

(JTA) — Paul Gosar, an Arizona Republican congressman known for his fervid support of former President Donald Trump, has announced a campaign fundraiser with Nick Fuentes, a white supremacist who has questioned the dimensions of the Holocaust.

“Please join Nick Fuentes and America First for a fundraiser event with Congressman Paul Gosar,” said the announcement posted Monday on social media. A photo shows Gosar and Fuentes smiling and posing together with coffee mugs.

Further details would be made public on July 1, according to the announcement, which directed readers to Gosar’s campaign website to make donations.

America First is the far-right organization founded by Fuentes, who has questioned the number of Jews who were killed in the Holocaust and believes that Israel has a malicious influence on U.S. policy.

Numerous social media platforms have banned Fuentes for his views.

“The JCRC is disgusted by the full embrace of white nationalists by AZ Representative Paul Gosar,” Rockower’s statement read. “We must never allow such extremism to be endorsed by our elected officials. That’s why the JCRC is working with a diverse coalition of partners across the Valley to demonstrate that racism and hate is not welcome in Arizona.”

Gosar was the only elected official who spoke in February at an America First conference. He subsequently appeared to distance himself from the group, telling another mainstream conservative group in which he had come under fire for appearing with Fuentes that he denounced “white racism.”

Gosar’s planned appearance with Fuentes has drawn sharp condemnations across the political spectrum.

Matt Brooks, the director of the Republican Jewish Coalition, posted on his Twitter feed an article in the conservative National Review headlined “Paul Gosar Hangs Out with Racists to Own the Libs.”

“This is reprehensible, @RepGosar,” the Republican Jewish Coalition said in a tweet. “Your association with Fuentes, and this event are absolutely inexcusable. You must immediately cancel this event, apologize, and denounce antisemite and Holocaust-denier, Nick Fuentes.”

Gosar appeared baffled by the negative feedback he was getting from the right.

“Not sure why anyone is freaking out,” he said on his Twitter feed. “I’ll say this: there are millions of Gen Z, Y and X conservatives. They believe in America First. They will not agree 100% on every issue. No group does. We will not let the left dictate our strategy, alliances and efforts. Ignore the left.”

Gosar was among the far-right Republicans who backed Trump’s baseless assertion that Joe Biden’s election was fraudulent.

Democrats called on the GOP leadership to censure Gosar. Minority Leader Kevin McCarthy “needs to decide whether this is what he wants his conference to reflect,” said Rep. Brad Schneider, D-Ill., who is Jewish.