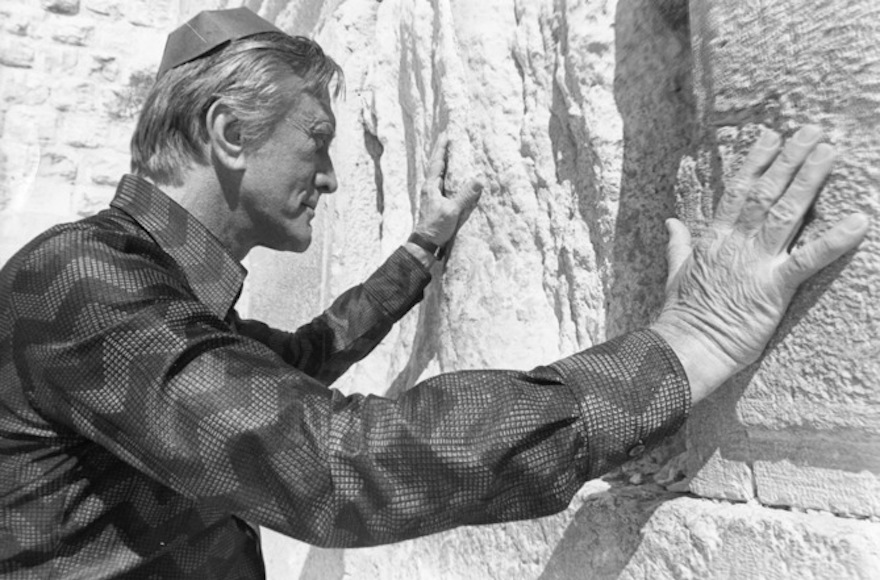 Kirk Douglas at the Western Wall in 1988. (Douglas Collection)
Advertisement

The memorial was held in Minsk on Sunday, during a joint Limmud FSU/Regional Nahum Goldmann Fellowship meeting. It included a remembrance prayer and a moment of silence conducted by the the capital city’s chief rabbi, Rabbi Shneur Deutsch, and the chief rabbi of the nation’s Progressive Jewish community, Grisha Abramovich.

Douglas, who died last week in Los Angeles at the age of 103, was born Issur Danielovitch in Amsterdam, New York, to Yiddish-speaking Jewish parents Bryna and Herschel Danielovitch from the Mogilev region of Belarus.

“This evening, this community honored the memory of one of its greatest descendants, who in addition to being a world-renowned movie star was first of all a proud Jew,” Chaim Chesler, founder of Limmud FSU, said at the service. “Even the young members of the Jewish community of Belarus know about and honor Kirk Douglas, and that is evidence, more than anything else, of the special connection that existed between the star, his Judaism in general and Jewish history in particular.”