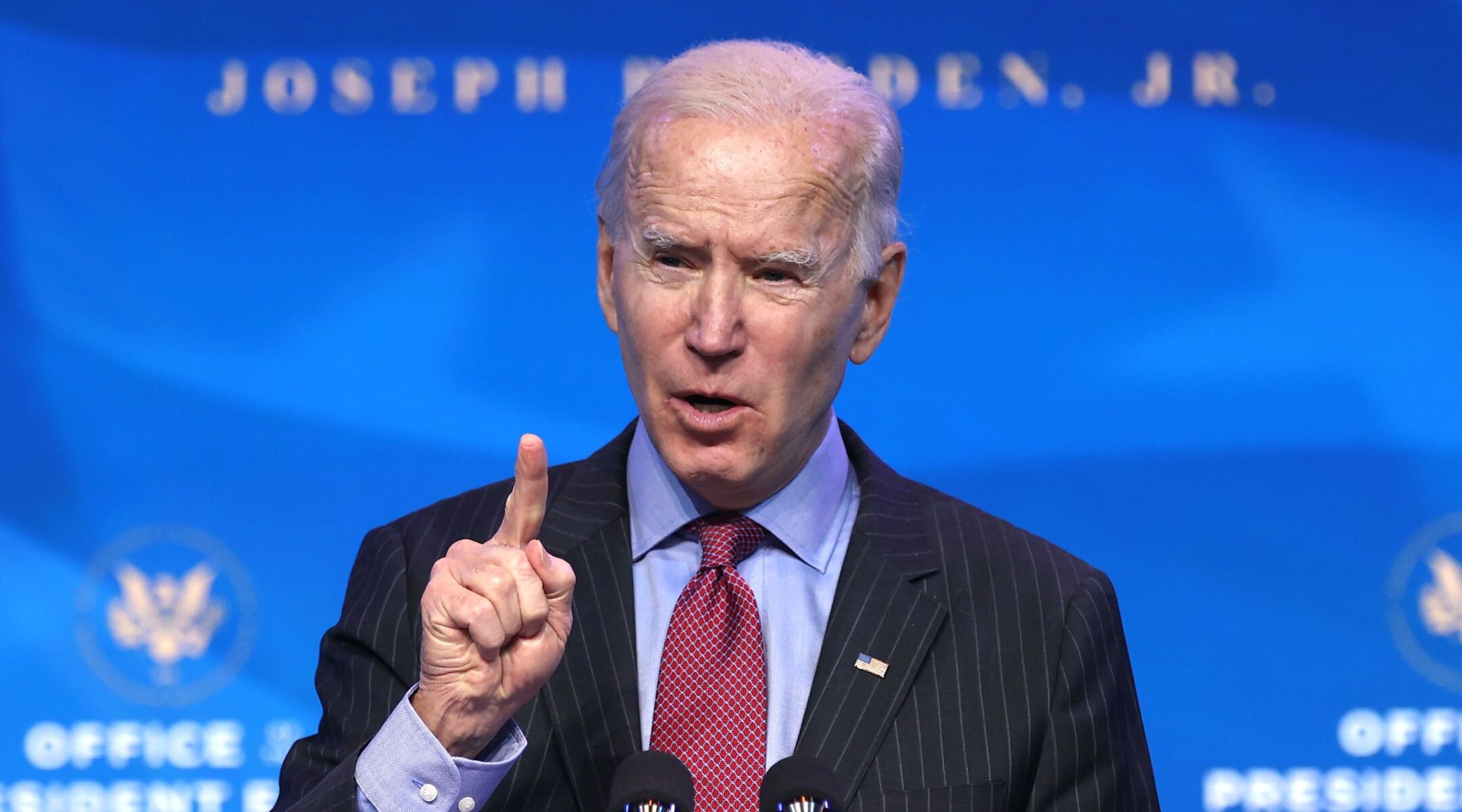 President-elect Joe Biden delivers remarks after he announced cabinet nominees that will round out his economic team, including secretaries of commerce and labor, at The Queen theater in Wilmington, Delaware on Jan. 08, 2021. (Chip Somodevilla/Getty Images)
Advertisement

(JTA) — President-elect Joe Biden cited anti-Semitic expressions by rioters in the U.S. Capitol this week in saying that his Justice Department should prosecute them.

“Yes,” he said Friday when a reporter asked if his Justice Department should prosecute the marauders whose looting of the Capitol this week in hopes of stopping Congress’s affirmation of Biden as president-elect resulted in five deaths.

“They should be treated as a bunch of thugs, insurrectionists, anti-Semites,” Biden said.

Biden, speaking at an event in Wilmington, Delaware, where he announced Cabinet picks for economy-related positions, quoted a slogan on a T-shirt that appeared in reporting of the riots on Wednesday. “‘Six million is not enough,’ I mean come on,” he said.

The reference is to a slogan, 6MWE, “Six Million Wasn’t Enough,” referring to the Jews murdered in the Nazi Holocaust.

There was anti-Semitic and racist symbology at the raid, but the particular photo with the t-shirt Biden seemed to be referring to was erroneously identified on social media with the insurrection, and was in fact taken at an earlier far-right event.

Biden has until now said he would not advise his Justice Department, seeking to draw a distinction with President Donald Trump, who pressured his attorneys-general to leave his friends alone and to prosecute his enemies. On Friday, taking questions from reporters, Biden said he would leave the charges to the discretion of the Justice Department, although it was clear he believed prosecution was merited.

“These are a bunch of thugs, they’re terrorists, domestic terrorists and that will be a judgment for the Justice Department as to what the charges should be, but the fact is they should be prosecuted,” he said.

Biden suggested Trump too should face investigation for his speech on Wednesday, in which he encouraged protesters to march on the Capitol.

“The difference here is this had the active encouragement of a sitting president of the United States and the way in which the breakdown of security occurred needs to be investigated,” he said.