Brazil’s president says ‘I love Israel’ in Hebrew upon arrival 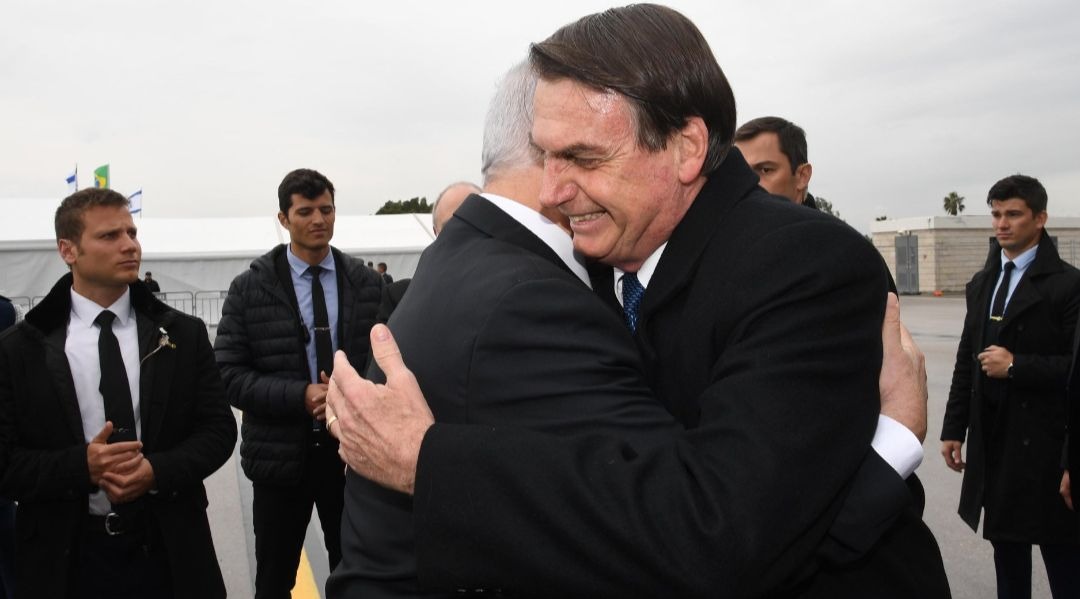 JERUSALEM (JTA) – Brazil’s president kicked off his tour to the Jewish state by declaring “Ani ohev et Israel,” Hebrew for “I love Israel,” after backtracking on a promise to open his country’s embassy in Jerusalem.

Jair Bolsonaro, an ardently pro-Israel Christian, was welcomed Sunday by Israel’s Prime Minister Benjamin Netanyahu at the Ben Gurion airport, an honor only reserved for some world leaders.

“It’s an honor to return to Israel. My government is firmly resolved to strengthen the partnership between Brazil and Israel. The friendship between our peoples is historic,” Bolsonaro said.

“We’ve had a moment of withdrawal, but returned to a balanced treatment of Middle Eastern issues,” added Bolsonaro, in a reference to Brazil’s last 15 years under far-left governments with an openly anti-Israel bias.

The importance given to the visit is also clear based on the fact that Netanyahu has made room on his agenda, in the midst of the final stretch of the fierce Israeli election campaign, to be with the Brazilian president at six events during his four-day visit.

“We are making history together. Brazil is a huge country with huge potential. I believe that under your leadership, this potential will be realized, not just for Brazil, but also for Israel-Brazil relations,” Netanyahu said during the welcome ceremony.

During his visit, Bolsonaro will sign bilateral agreements, visit the Western Wall, the Yad Vashem Holocaust memorial and Christian sites. He will also meet with Brazilian immigrants.

Last Thursday, Bolsonaro said he may open a “business office” in Jerusalem, which would sink his presidential campaign promise to move the Brazilian embassy from Tel Aviv to the Israeli capital. On Sunday, Brazilian Foreign Minister Ernesto Araújo discussed the opening of a Brazilian diplomatic office in Jerusalem with acting Foreign Minister Israel Katz, which he said would be a branch of the Tel Aviv embassy and would promote trade and investment.