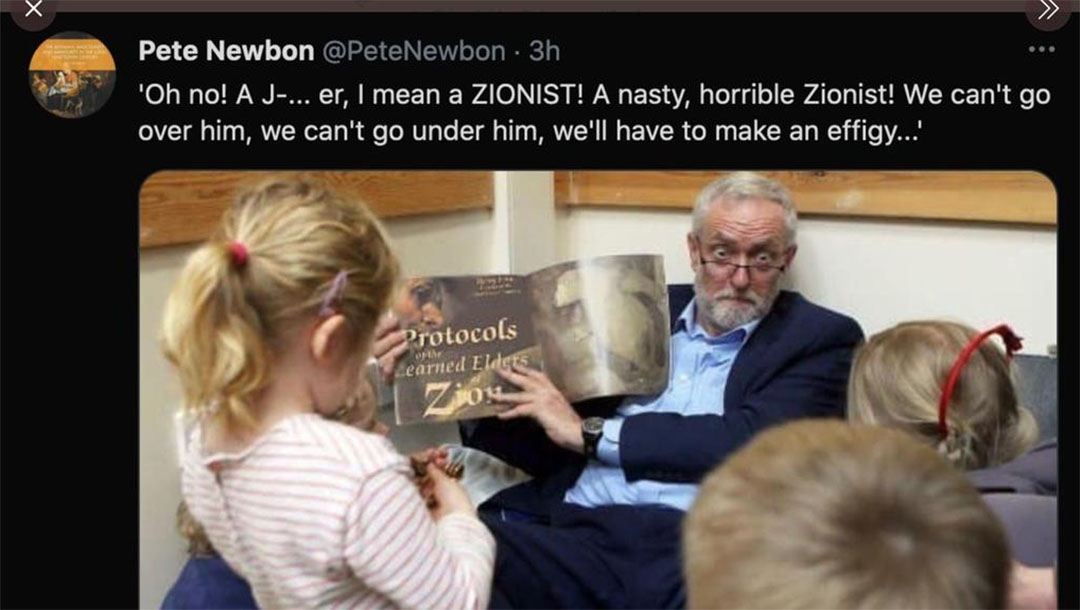 (JTA) — A British-Jewish academic is facing an ethics review for posting an image on social media suggesting that former Labour Party head Jeremy Corbyn is antisemitic.

Newcastle’s Northumbria University defined as “urgent” its probe of Pete Newbon, a senior lecturer in Romantic and Victorian Literature, over the image, the BBC reported Thursday.

Corbyn is seen reading to children from a book with the title doctored to read “The Protocols of the Meetings of the Learned Elders of Zion,” a 19th-century antisemitic conspiracy theory.

The tweet’s text reads: “A nasty, horrible Zionist! We can’t go over him, we can’t go under him, we’ll have to make an effigy.” It’s a reference to “We’re Going on a Bear Hunt” by Michael Rosen.

In 2009, Corbyn called Hamas and Hezbollah his friends and said that Hamas is working to achieve peace and justice. Four years later he defended an antisemitic mural showing Jewish bankers playing Monopoly on the backs of dark-skinned men.

In 2015 he laid flowers on the graves of Palestinian terrorists who murdered Israeli athletes in Munich in 1972. That year he also said British “Zionists” don’t understand British irony.

Britain’s late Chief Rabbi Jonathan Sacks and the Board of Deputies of British Jews have called Corbyn an antisemite. The current chief rabbi, Ephraim Mirvis, said Corbyn was “complicit in prejudice” against Jews. Dozens of Labour lawmakers who criticized Corbyn over antisemitism concerns have left amid anti-Semitic abuse by Corbyn supporters.

Corbyn has denied having any antisemitic biases.