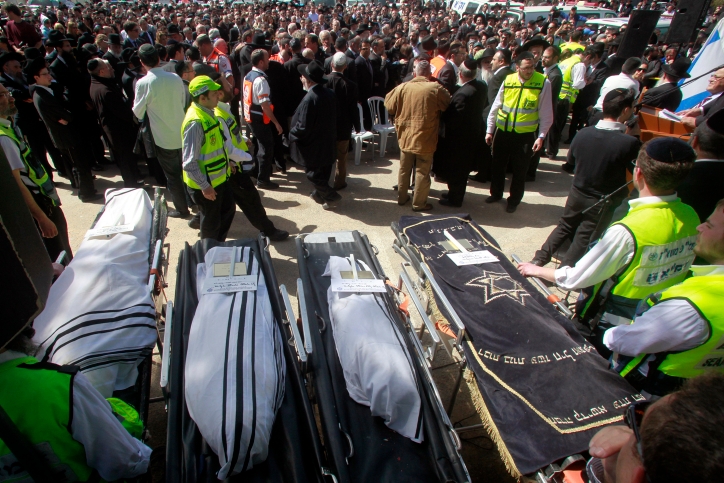 The bodies of the victims of Monday's shooting at a Jewish school in Toulouse, France, during their joint funeral service in Jerusalem, March 21, 2012. (Uri Lenz/FLASH90 )
Advertisement

(JTA) — The brother of the gunman who killed four at a Jewish school in France in 2012 will spend 30 years in jail after being found guilty of being an accomplice in the murders.

Abdelkader Merah, 36, on Thursday received the three-decade jail term from a Paris appeals court after being found guilty of complicity in the slayings by Mohammed Merah at the Toulouse school, as well as three soldiers.

In 2017 he had been ordered jailed for 20 years being part of a terrorist conspiracy but had been cleared by a lower court of having a direct hand in his brother’s shooting attack. The appeals court determined that he was complicit in the slayings. The prosecution had asked for a life sentence.

Mohamed Merah killed Rabbi Jonathan Sandler and two of his children as well as another girl in March 2012 at the Otzar Hatorah school in Toulouse. Days earlier, Merah killed three French soldiers in two attacks in the suburb of Montauban, France. He was killed in a shootout with police in his Toulouse apartment where he hid after the school killings, which he said in a video he perpetrated as part of jihad and to avenge the suffering of Palestinian children.

Born to a family of four children, Mohammed Merah was “raised to be an anti-Semite because anti-Semitism was part of the atmosphere at home,” his youngest brother, Abdelghani, said in 2013.