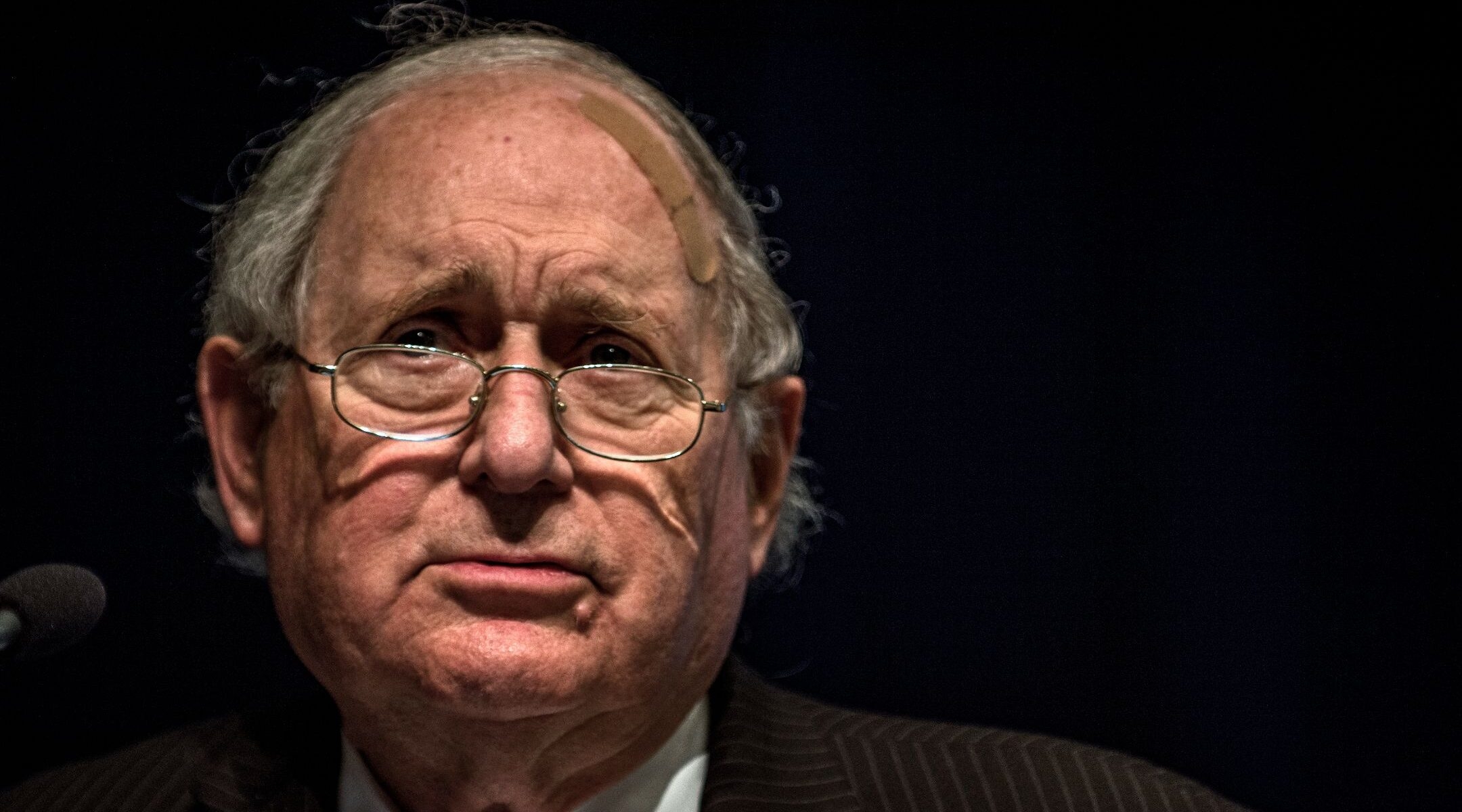 Former U.S. Sen. Carl Levin speaks at the headquarters of the World Bank in Washington, D.C., May 23, 2015. (Lawler Duggan/For The Washington Post via Getty Images)
Advertisement

(JTA) — Carl Levin, the Jewish Michigander who spent 36 years as a fierce inquisitor in the Senate, has died at 87.

The Levin Center at Wayne State University Law School announced Levin’s passing on Thursday. It did not give a date or cause of death, but Levin was diagnosed with lung cancer four years ago. The center, named for Levin, focuses on the passion of his career: government oversight.

Levin, first elected to the Senate in 1978, became his state’s longest-serving senator. From 2001 until his retirement in 2015, Levin served as the chairman or the ranking member of the Senate Armed Services Committee. He was always a little disheveled and spoke softly, and his staffers described him as a rarity — a kind and accommodating boss in the world’s most intense pressure chamber.

“Carl Levin was a giant of a Senator and a giant of a human being with a big heart and a kind soul. He made his mark and will go down in history as one of the best,” former California Senator Barbara Boxer told the Jewish Telegraphic Agency.

President Joe Biden, who served with Levin in the Senate for decades, evoked Levin’s signature avuncularity in his remembrance. “With his head tilted down, his eyes peering over his glasses – Carl always looked people straight into their own eyes, listened with an open mind, and responded the way he saw it with respect,” Biden said.

Levin could be fierce in eliciting testimony in the Senate as chairman of the subcommittee on investigations. Hauling Goldman Sachs executives before his committee in 2010, amidst the carnage of the 2008 financial collapse, he said, quoting an internal email: “You knew it was a ‘shitty deal’ and you didn’t tell your clients. Does that bother you at all?” He repeated “shitty deal” a half dozen times in two minutes, and his subjects squirmed on camera.

Sen. Ron Wyden, D-Ore., who like Levin is Jewish and has a reputation as a relentless inquisitor — in Wyden’s case, the target is the intelligence community — paid tribute to his colleague’s probity. ““Every single day for years and years, Carl Levin gave public service a good name,” Wyden told JTA. “Whether it was holding powerful special interests accountable, focusing on economic policies that gave everybody in America the chance to get ahead, or building principled bipartisan alliances across the aisle, he represented what doing the people’s business is all about.”

Levin’s liberal economic outlook was shaped as he watched the diminishment of his once muscular and beloved city, Detroit. He fought hard for car manufacturers in Congress, knowing the lifeblood that they were for his state’s working class. He worked as a taxi driver while in college — he said he knew Detroit’s every block — and on an assembly line at Chrysler.

Levin was a dove who spoke out early against the George W. Bush administration’s plans to invade Iraq, but as chairman of the committee that shaped military policy he was also a defender of protections for the armed forces, sometimes to what fellow Democrats was a fault. He successfully prevented bids to take investigations of sexual misconduct out of the hands of the line of command.

Joe Lieberman, who served for years in the Senate as a Democrat and then an Independent, said Levin’s work ethic endeared him to both sides of the aisle. ” “He was absolutely trusted by all of us who were privileged to serve with him,” Lieberman, who is Jewish, told JTA.  “We trusted his ethics, we trusted his judgment, and we trusted his advice because we knew he had ‘read the bill’ and thought about it before he spoke. And we liked him too. That made him a very effective senator. It also meant he had as many friends and legislative partners among Republicans as among Democrats, particularly on the Senate Armed Services Committee where I served with Carl for two decades. ”

Levin told interviewers he grew up in a middle-class household in Detroit and that his parents, Saul and Bess Levin, were Zionists. Bess was active in Hadassah.

His brother “Sandy and I and our sister Hannah used to call ourselves Hadassah Orphans because when we got home in the afternoon, my mother was never there,” he said in an oral history for the Detroit Jewish Federation. “She was volunteering for Hadassah.”

Lieberman said Levin would convene the Jewish senators to partake of pre-Rosh Hashanah goodies. “He also brought us together every year before Rosh Hashonah in his hideaway for apples, honey, and a good cup of sweet kosher wine,” he said.

Levin was a go-to senator for lobbyists from the American Israel Public Affairs Committee and was attentive to their requests for defense assistance to Israel. However, he parted ways with AIPAC when the lobby, heeding the Israeli government at the time, opposed the emerging Iran nuclear deal in 2015.

Even after his retirement in 2015, as the deal neared completion, Levin remained influential, urging his former colleagues to back the deal.

He was devoted to the entire state, traveling to its farthest corners to meet constituents. A staffer recalled to the Jewish Telegraphic Agency that he convened the staff after a woman in an airport complained to him that she had not heard back from his office after writing. The talk, the staffer said, was “serious,” but not a rebuke and not unkind.

Levin’s older brother Sander Levin was elected to the U.S. House of Representatives in 1982, and from 2010-2012 — when Sander was the chairman of the tax-writing Ways and Means Committee and Carl chaired the Senate Armed Services Committee — they were the most powerful brothers in Washington.

They were throughout their lives the closest of friends. Sander, who retired in 2019 — replaced by his son and Carl’s nephew, Andy Levin — described his sadness in 2014 anticipating Carl’s retirement.

“We’ve been the longest-serving siblings in the history of Congress,” Sander Levin told the Detroit Free Press. “We were raised together and have always been very close … we roomed together at law school … whenever there were issues of common interests, we talked quite a lot. And we sat together for 32 State of the Union Addresses. So it will be very different not sitting together this year.”