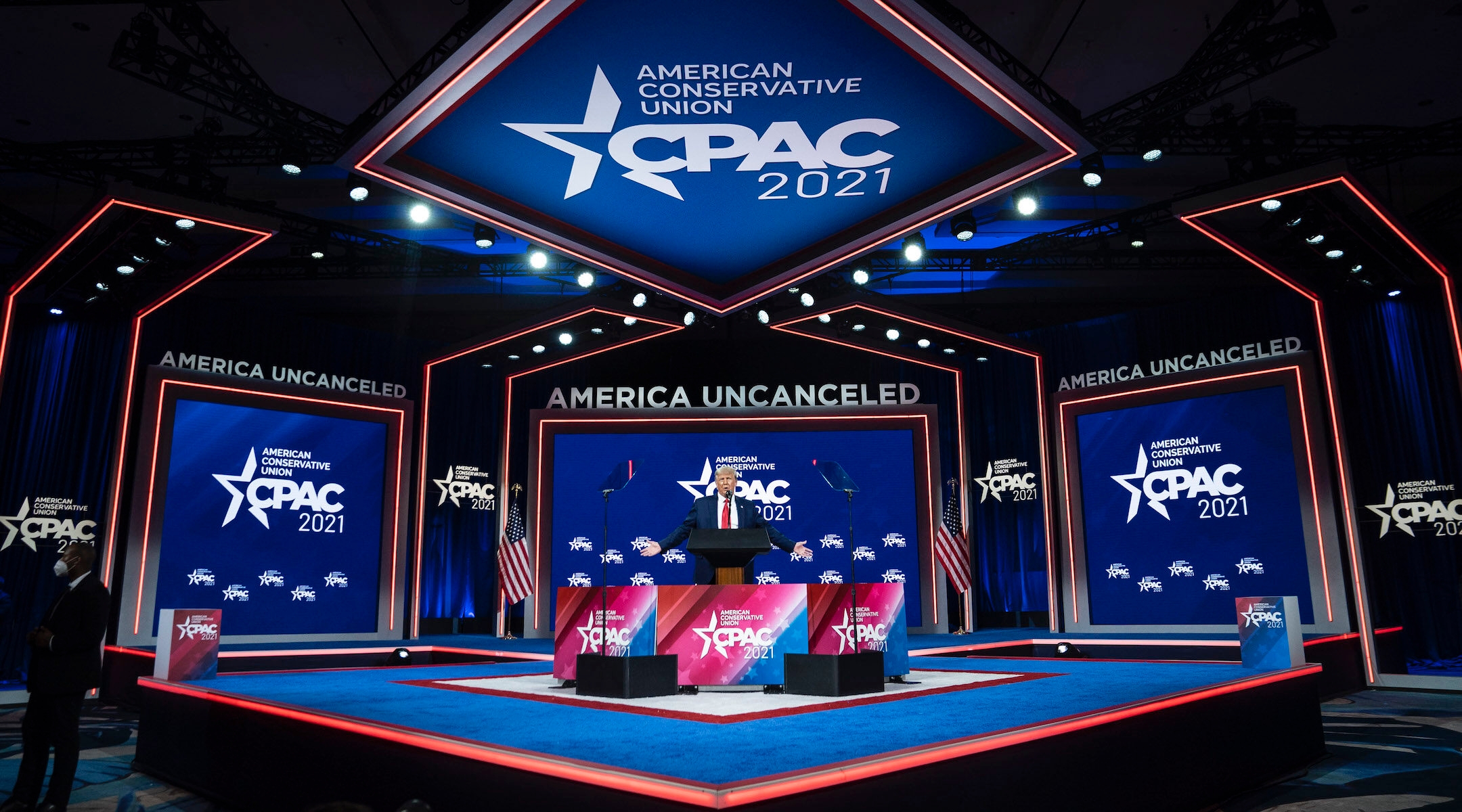 (JTA) — After viewers noted that the stage at the CPAC conference was shaped like a Nazi symbol, the organizer of the conservative political conference said any resemblance was unintentional.

But Hyatt, which operates the hotel that hosted the conference, called the prospect of the symbol being included in CPAC “abhorrent.”

CPAC is perhaps the leading annual conservative conference, drawing a who’s-who of prominent Republicans as well as lower-profile activists. This year, former President Donald Trump was the top-billed speaker.

On Friday, The Daily Beans, a liberal news podcast, noted that the stage of CPAC, which was taking place in Orlando, Florida over the weekend, was shaped like the Odal Rune, an ancient European symbol that was later appropriated by the Nazis as part of the Waffen-SS uniform. In the past, the Anti-Defamation League has called the Odal Rune, also known as the Othala Rune, “part of [Nazis’] attempt to reconstruct a mythic ‘Aryan’ past.”

Has anyone else noticed the shape of the CPAC stage is the Odal Rune/SS insignia? pic.twitter.com/TCns4B1tq8

The observation quickly gained currency on social media, where users including a representative of a Democratic Jewish organization suggested they did not believe the resemblance could be accidental.

But Matt Schlapp, chair of the American Conservative Union, which runs CPAC, called the idea that the stage was purposely shaped like the Odal rune a “conspiracy theory.”

“Stage design conspiracies are outrageous and slanderous,” he tweeted Saturday. “We have a long standing commitment to the Jewish community. Cancel culture extremists must address antisemitism within their own ranks. CPAC proudly stands with our Jewish allies, including those speaking from this stage.”

The statement drew support from Jewish conservatives, including Josh Mandel, the Ohio Republican who is running for Senate in his home state. He thanked CPAC’s organizers for being “proud Christian Zionists.”

Despite Schlapp’s statement, Hyatt Hotels distanced itself from the symbol and condemned it. According to the Guardian, Hyatt said the American Conservative Union was in charge of stage design.

“We take the concern raised about the prospect of symbols of hate being included in the stage design at CPAC 2021 very seriously as all such symbols are abhorrent and unequivocally counter to our values as a company,” the hotel chain said, according to the Guardian.

CPAC faced a controversy over anti-Semitism last week as well when one of its speakers, known as Young Pharaoh, was found to have posted anti-Semitic messages on social media. The conference canceled his appearance as a result.